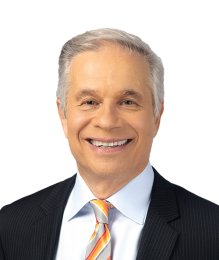 Mike Sobel is the weather specialist and co-host of Edmonton’s #1 rated Global News Morning starting at 5AM weekdays! Edmontonians have been watching Mike on ITV, and now Global Edmonton, since the mid-eighties on shows like Hi Q, Four O’clock Rock, Disney Afternoon & many telethons & New Year’s Eve countdowns.

Mike grew up in Toronto where he attended York University. He spent a lot of time working at the campus radio station which led to his interest in the media. Mike then began his radio career which took him to Weyburn, Saskatchewan, then Regina and various stations in Edmonton (CFRN, CJAX, KING, CISN, and MAGIC 99) where he played records, cartridges and eventually computer sound files for many years. One of his favourite radio memories was taking two listeners on a trip to New York where they attended a Garth Brooks concert in Central Park in front of 250,000 fans.

Mike is married to a fitness instructor and has two adult sons who flew the coup out to the west coast.

When Mike is not reporting the highs and lows on the weather map, he spends his spare time in the gym, riding his bike, skiing, walking his dog Cozmo and spending way too many hours watching television sports. Mike also spends a great deal of time supporting charities like the MS Society of Canada, the Juvenile Diabetes Research Foundation, the Kids with Cancer Society, the Stollery Children’s Hospital, and many more community events in and around our city!

WATCH: Mike answers a few questions for Global Edmonton viewers, including: how would people describe you, and what is the best part of living in Edmonton?