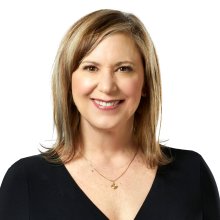 In 1989 Leslie landed her first job in Terrace, British Columbia. After a few years in BC, Leslie made her move out east were she worked in Red Deer, Alberta and Regina, Saskatchewan as a News reporter, Anchor, Weather Anchor and Talk Show Host.

In 1995 Leslie joined Global Calgary. After 20 years in broadcasting, Leslie still has a huge passion for live TV and covering breaking news.

She also states that a few highlight of her career, thus far, has been working on the Pan Canadian Students Choice awards program, as well as hosting the Annual Stampede Lottery Show, working on the Grandstand Show at the Calgary Stampede and emceeing the Calgary Police Chiefs awards for Chief Jack Beaton.

Favorite People: My daughter, Avery – she is the light of my life! My family, who always inspire me to live well and give back.

Favorite Charities: The Calgary Interfaith Food Bank – because no one should go hungry… Ever! All Breast Cancer Fundraisers – this disease touches all of us, and I have a daughter who should not have to fear this disease.