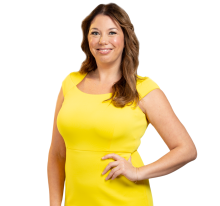 Born and raised in Sorel-Tracy and Montreal, Kim had no idea that a career in broadcasting would be in the cards for her.

Her fifth grade teacher saw her potential, though, and had Kim participate in a public speaking contest, where a seed was planted in her mind.

After that, Kim participated in many public speaking contests, where she was crowned twice as Princess of the Saint-Patrick’s Day Parade and once as Miss Quebec Int’l.

She dreamed of one day hosting a travel TV show, but Kim chose to pursue studies in the fields of education and psychology.

She became a teacher for the deaf at the Mackay Centre.

Having travelled to over 30 countries and lived on three continents during that time, Kim was content.

However, the seed that had been planted years earlier had now blossomed into a true desire to work in broadcasting.

In 2004, Kim decided to drop everything to follow her dreams.

Lucky for her, a judge at one of her public speaking contests was the G.M. of a radio company in Montreal.

He recognized her name when she called for an internship and, on the spot, hired her as a board operator and producer for CJAD, Mix 96 and CHOM.

She was soon promoted to traffic anchor, then co-host of The Irish Show on CJAD and host of The Sulli Show on Virgin Radio.

In 2009, Kim moved to Winnipeg, before relocating to Ottawa.

She had her first taste of television as part of a 2012 bucket-list accomplishing show.

After 12 years in radio, Kim is now the weather specialist with Global News Morning – her first full time job in television (though her two Yorkies aren’t so sure about her 3:30 a.m. wake up call!)

Kim’s love of learning has seen her transform into a self-described “weather geek.”

Ask her about “that airport storm watch story” next time to see her!