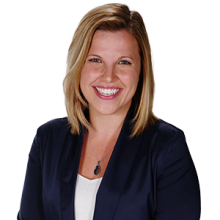 Kelsey Campbell is the executive producer for 630 CHED and Global News Radio 880 Edmonton.

Kelsey graduated from Ryerson University’s School of Journalism, where she was a reporter for the Ryerson Rams Network, covering a plethora of varsity sports. This experience led to Kelsey being selected to go to Shenzhen, China to cover the 2011 Summer Universiade, kick-starting her career and leading her to northern BC to be a sports anchor for CJDC-TV in Dawson Creek.

Kelsey made the move to Edmonton to work in television as a reporter, producer and writer, before transitioning to radio at 630 CHED. She has since produced a number of talk shows and regularly fills in as a guest host on CHED. Kelsey is also an announcer on CISN Country 103.9. You can hear her every Saturday and Sunday from 6 p.m. until midnight.

When she isn’t scanning news sites and social media, Kelsey is camping, hiking, skiing, volunteering or running with her husband, Travis, and their two dogs, Stella and Porter.

Kelsey Campbell fills in for Ryan and tackles everything from self-defence know-how to the best hidden gems in Alberta for outdoorsmen. Continue reading →

Wednesday, May 31 – Elk Island National Park as an overcrowding problem and now Parks Canada is scrambling to do something about it. Dale Kirkland, the Superintendent for Elk Island says there’s an overpopulation of moose, elk and bison, and a cull is just one option being considered. We’ll open the phone lines just after 9:30, to… Continue reading →

Tuesday, May 30 – A world-renowned cancer expert is coming to Edmonton to speak at the Citadel Theatre on Thursday. Dr. Simon Sutcliffe is the president of the Two Worlds Cancer Collaboration Foundation, the former CEO of the BC Cancer Agency and has dedicated the majority of his life to curing cancer. At 9:20, David Eggen, Alberta’s Education… Continue reading →

Navalny was arrested after arriving back in Moscow on Jan. 17 from Berlin, where he was recovering in-hospital afte… twitter.com/i/web/status/1…

RT @globalwinnipeg: A nice way to start a Saturday. Someone in Winnipeg is in possession of a lottery ticket worth $60 million. https://t…