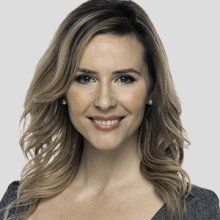 Weather Anchor, Kasia Bodurka, featured on Global News Morning and Global News at Noon Weekends, joined Global BC in 2017. She brings extensive forecasting and broadcast experience spanning the entire country and beyond.

Prior to joining Global BC, Kasia’s diverse career included a five-year stint hosting and co-producing a live daily variety show, spending another five years anchoring and reporting on weather across Canada, and sailing the seven seas while hosting and producing in-house television content on cruise ships.

Growing up Polish, Kasia was often called a “Chatty Kathy” for her vibrant persona and fitting name translation (Kasia is Polish for Kathy). It was no surprise that she majored in mass communication at The University of Ottawa, then went on to study broadcast journalism at Seneca College in Toronto. Upon graduation, Kasia landed her first job as a community events host and a producer at a small local TV station in Durham, Ont.

Kasia’s passions include travel, adventure and all matters of self-development.