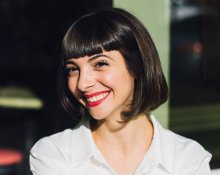 Jasmine Pazzano is a national video journalist who produces, writes, films, edits and appears in stories that air across Canada.

During the height of the COVID-19 pandemic in 2020, she covered the top breaking international stories and produced in-depth explainers on the emerging disease.

She spent more than two years reporting in the field as a video journalist for Global Durham. Her storytelling helped create change across Durham Region’s eight municipalities — after her consistent coverage of the Clarington floods in 2017, the local government adopted a flood response plan to aid disaster victims in the area.

Her first gig at Global News was as an intern at The Morning Show. Since then, she has also contributed to the Global News Toronto team as an editorial assistant and assignment co-ordinator, monitoring breaking news and chase producing.

In 2014, Pazzano graduated with honours from Ryerson University’s School of Journalism, where she returned to teach a digital journalism class four years later.

She has interned and volunteered at stations across Toronto, including ET Canada, CTV News Toronto and Rogers TV.

Pazzano especially enjoys multimedia storytelling, including photojournalism — she spent her weekends and summers in university working as a photojournalist at snapd Pickering/Ajax.