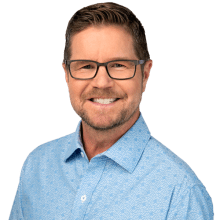 Gord Gillies is best known for his varied and diverse 25 year career with Global News in Calgary. His work as a journalist and a story teller have set him up perfectly for his new home on the radio.

Gillies began his career in journalism as a copy boy at the Toronto Star in 1981. During that time he graduated from the Radio and Broadcasting Arts program at Humber College in Toronto.

He has worked in a number of newsrooms across the country including CBC, CTV and Global. Covering the 1988 Olympic Winter Games in Calgary remains a highlight in his career, and he believes covering the devastating floods in southern Alberta in 2013 is among his most important work.

Upon arriving at Global in 1991, Gillies had the opportunity to work alongside the late Ed Whalen where he marveled at his dedication to work and the community.

In 2013, Gillies and the Global News Calgary team brought home the RTDNA award for Canada’s Best Newscast. In 2017, Gord was honoured to receive a Lifetime achievement award from the RTDNA for his career in broadcasting and service in the community.

A supporter of many charitable initiatives, Gillies volunteers with The Alberta Children’s Hospital Foundation, The Salvation Army, Hull Child and Family Services.

An avid golfer, you can find Gillies on the green, enjoying most sports or outside hiking in the mountains. When not playing sports, Gillies can be spotted spending time with his wife and two kids, likely at a coffee shop post-workout.

Gord Gillies signs off for the final time

Exploring the history of the Calgary Stampede, sparked by a visit from an American showman and entrepreneur

Spirited volunteers are the backbone of the Calgary Stampede

Gord Gillies: A Calgary tour through the battlegrounds of the First World War

Gord Gillies says a quiet walk through a southwest Calgary community highlights the importance of wearing a poppy on Remembrance Day. Continue reading →

Gord Gillies: Still leaning ‘Yes,’ but not sold on Calgary 2026 yet

Gord Gillies: Getting a cannabis store preview in Denver

What might your neighbourhood cannabis store look like on October 17th? Gord Gillies peeked inside a marijuana shop in Denver, Colo. Continue reading →

Gord Gillies: Five year anniversary of the 2013 floods in Calgary

Gord Gillies reflects on how every encounter he had with the Olympic dreamer left him in a better mood. Continue reading →

Gord Gillies reflects on how the Humboldt Broncos tragedy has affected his home and his country. Continue reading →

Gord Gillies: The powerful silence at March For Our Lives

A quiet pause in the middle of the March For Our Lives rally sent a powerful message, writes Gord Gillies. Continue reading →

Gord Gillies: Every day is a gift

Thank you to the nurses, paramedics and ER team who treated my mother. Continue reading →

Gord Gillies: A look at how our athletes performed at the 2018 Winter Olympics in South Korea

Canadians have got to be happy with the most medals – ever – at an Olympic Games. Continue reading →

Gord Gillies: Canada off to a great start in 2018 Winter Olympics

While the sporting events have certainly changed in 30 years, what hasn’t for me is the excitement of seeing the Maple Leaf and hearing O Canada. Continue reading →

Gord Gillies: ‘Live and let live’ when it comes to Calgary nude swim

By popular demand, Gord Gillies’ rant on the nude swimming event being cancelled at the Southland Leisure Centre. Continue reading →

A timely reminder of just how small the world really is, how much fun it is making new friends and a wish for all to avoid the dreaded Milkshake Duck. Continue reading →

As the much-maligned public art program gets a much-needed review, here’s my two cents on how to move forward: keep it simple, stupid. Continue reading →

Gord Gillies: It’s time to step up and get an arena deal done in Calgary

To me, this isn’t just about possibly losing the hockey team. This is about losing a huge part of the heart and drive that makes Calgary such a dynamic city. Continue reading →

“We need a solid, permanent solution": But some insiders fear that a solution, aimed at avoiding a repeat of what h… twitter.com/i/web/status/1…

Health Canada says anyone who has purchased this product should stop using it "immediately." trib.al/zyuZ5YT