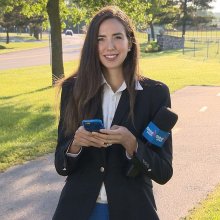 Gloria started her journalism career in Central America before moving to Canada in 2009 to study.

She holds a degree in Journalism from the University of King’s College and a Business Law degree.

Before hitting the text books, she worked as a writer and editor of magazines for Diario La Tribuna.

She got her first TV journalism job at Global Montreal in 2010 where she worked as a researcher, reporter and field-producer.

Her most memorable stories include filing for Global National from an inflatable raft during historic floods in Saint-Jean sur-Richelieu valley, and chasing after Alouettes’ football players the morning of the Grey Cup parade.

After working behind the scenes of Global Montreal’s Morning News, Gloria now is a reporter/web producer.

Gloria enjoys travelling. While in Canada she’s lived in Toronto, Halifax and Montreal.

She spent a year in Lyon, France and grew up along the warm shores of Honduras.

She credits constantly changing zip codes to her love for languages: she speaks fluent English, French and Spanish.