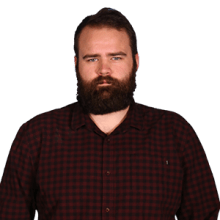 Born and raised in the Edmonton area, Devin Horne is the studio producer for 630 CHED’s Ryan Jespersen Show and he works as an anchor and reporter for the 630 CHED/iNews880 newsroom.

Always a news junkie, Devin decided to attend the Radio and Television Broadcasting program at NAIT in 2016 after spending seven years working as an equipment operator.

In his spare time you can find him trying new restaurants with his girlfriend, or riding his motorcycle.

Dan Johnstone says he’s hoping to raise over 50,000 pounds of food for the Edmonton Food Bank by the end of his campaign on Christmas Eve. Continue reading →

The installation of bike lanes in Edmonton has brought some growing pains as pedestrians, cyclists and drivers get used to new rules and new traffic layouts. Continue reading →

The United Conservative Party leader doubled-down on the potential policy in a statement on Monday and called for a provincial referendum if the federal government continue to push a carbon tax on the provinces. Continue reading →

With Edmonton streets on the brink of invasion by princesses, superheroes, ghosts and pirates, the Edmonton Police Service (EPS) is out with some safety tips to ensure everyone has a fun and safe Halloween. Continue reading →

Forget the gold rush, first-time investors are looking to cash in on the green rush, but financial advisors are warning those looking to cash-in on cannabis. Continue reading →

Alberta agriculture societies unsure of funding status with the province

Agricultural societies across Alberta are getting frustrated with a lack of funding coming from the province. Continue reading →

Alberta’s energy minister is wrapping up an 11 day trip through Asia this week to promote Alberta’s oil and gas sector. Continue reading →

Biden plans to halt construction on Trump’s U.S.-Mexico border wall, end the ban on travel from some Muslim-majorit… twitter.com/i/web/status/1…