Half of Canadians say they know little about new Conservative leader O’Toole: poll

By Joan Bryden The Canadian Press

Most Canadians know very little about new Conservative Leader Erin O’Toole but a new poll suggests his personal qualities and policy positions could eventually give his party a boost.

Fifty-two per cent of respondents said they didn’t know enough about O’Toole to say whether they have a positive or negative impression of the new leader, who took the helm of the Official Opposition one week ago.

Moreover, the poll, conducted Aug. 28 to 30 by Leger and the Association for Canadian Studies, found there was no bump in support for the Conservatives following O’Toole’s leadership victory.

However, a poll conducted by Ipsos exclusively for Global News prior to O’Toole’s election found that nearly half of all Canadians said they may cast a ballot for the Tories in the next election. But, a nearly equal number — 47 per cent — said they were unaware there was a leadership race going on at all until they were polled.

In the Leger poll, support among decided voters for the Conservatives actually dropped one point to 29 per cent versus the previous week. Liberal support also dropped, by three points, to 35 per cent, with the NDP moving up three points to 21 per cent and the Greens down one point to five per cent. 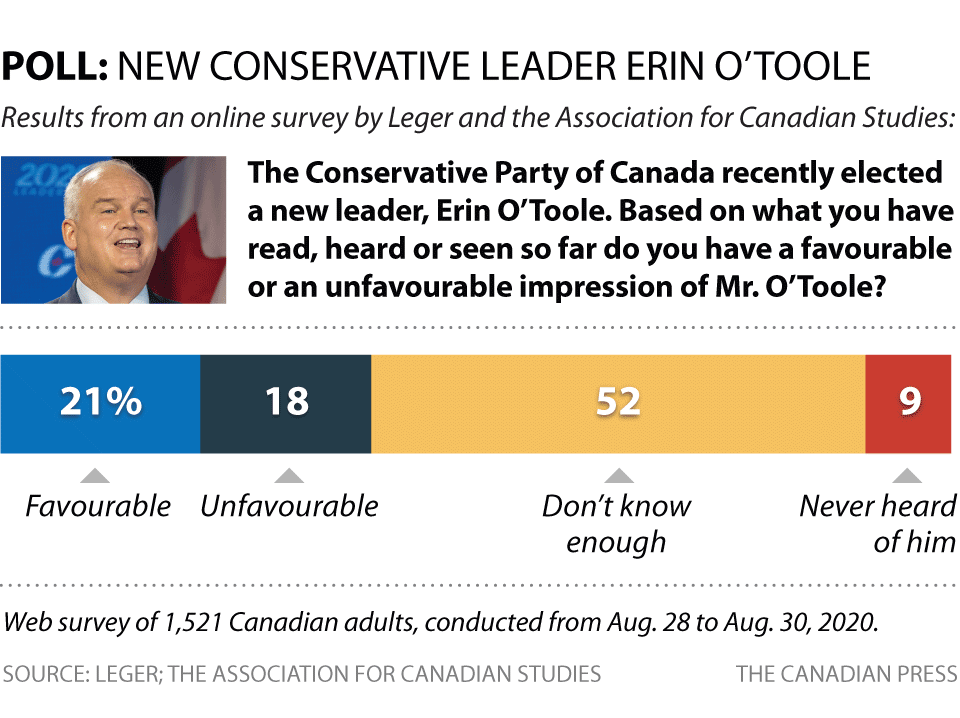 The online survey of 1,521 Canadians cannot be assigned a margin of error because internet-based polls are not considered random samples, but all those changes are small.

In Quebec, the poll found the Bloc Quebecois ahead with 34 per cent support to the Liberals’ 30 per cent, the NDP’s 18, the Conservatives’ 14 and the Greens’ two per cent.

“There’s no O’Toole effect on Conservative voting for now because, for the most part, we’re still at the Erin Who? stage,” said Leger executive vice-president Christian Bourque.

Still, the poll asked respondents if they’d be more or less likely to consider voting Conservative based on various O’Toole attributes and policy positions. And those results suggest he could eventually become more of an asset to his party as he becomes better known, although he could face some regional challenges particularly with regard to his energy policies.

Respondents were not asked about O’Toole’s vow to allow socially conservative MPs to express their views, put forward private members’ bills and vote freely on matters of conscience.

A plurality (29 per cent nationally and 44 per cent in Quebec) were more likely to consider supporting the Conservatives when told that O’Toole was born in Montreal and is bilingual, although the fluency of his French has been questioned.

A plurality also were more likely to consider voting Conservative when told that O’Toole is a former member of the Canadian Armed Forces, advocates a harder line against China, supports building new pipelines and is opposed to a carbon tax.

However, a regional divide was apparent over his energy policies. His stance sat particularly well with respondents in Alberta and Manitoba/Saskatchewan but a strong plurality of respondents in Quebec said his support for pipelines made them less likely to consider voting Conservative while Quebecers were almost evenly split over his opposition to a tax on carbon (23 per cent more likely to vote Conservative versus 21 per cent less likely).

The fact that Alberta Premier Jason Kenney endorsed O’Toole in the leadership contest was the only overall negative, with 20 per cent nationally saying it made them less likely to vote Conservative and 15 per cent saying they’d be more likely. Even in Alberta, 34 per cent said Kenney’s support made them less likely to consider O’Toole’s party federally, to 26 per cent who said they’d be more likely.

Bourque said the results suggest an openness towards O’Toole but he said the new leader’s ultimate success will depend on his ability to distance himself personally from the socially conservative wing of the Conservative party (whose support was a decisive factor in his leadership victory), and on his ability to sell his energy policies in vote-rich central Canada.

All told, Bourque said the poll suggests O’Toole needs time to make himself known to Canadians and would be wise not to try to defeat Justin Trudeau’s minority Liberal government this fall.

“He’s clearly not ready yet.”

Should there be an election this fall in the midst of the COVID-19 pandemic, 78 per cent of respondents said all Canadians should have the option of voting by mail.

— with files from Global News