Procession for Snowbirds crash victim makes its way through Halifax

By Holly McKenzie-Sutter The Canadian Press

A procession honouring the Canadian Forces Snowbirds team member killed in a recent plane crash began under blue skies in Halifax Sunday evening, as the remains of the young officer remembered for her bright smile arrived in her hometown.

Close friends and family members wearing black and the official Snowbirds colours of red and white laid flowers on Capt. Jennifer Casey’s casket during a homecoming ceremony on the tarmac near Halifax Stanfield International Airport.

The 35-year-old military public affairs officer and Halifax native died in the crash of a Snowbirds Tutor jet in a residential area of Kamloops, B.C., last Sunday.

The national aerobatics team was on a cross-country tour to boost residents’ spirits during the COVID-19 pandemic.

Defence Minister Harjit Sajjan and Gov. Gen. Julie Payette wore face masks as they stood at the airport ceremony along with dozens of military members. 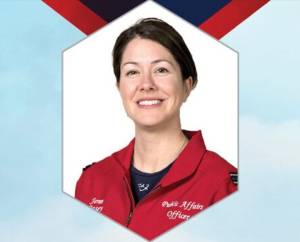 Capt. Jennifer Casey, public affairs officer for the Canadian Forces Snowbirds, was killed in a plane crash in Kamloops, B.C., on Sunday, May 17, 2020.

Payette said the Snowbirds do a risky job, and added she was proud to be in Halifax honouring Casey.

“The fact that this happened during Operation Inspiration, where they were going around cheering us Canadians, is even more tragic,” Payette said after the ceremony.

A bagpiper played while military members carried Casey’s casket from the CC-130J Hercules that had taken off from Abbotsford, B.C., Sunday morning after an earlier private ceremony with her Snowbirds teammates.

A police-escorted motorcade then left the Halifax airport to transport Casey’s remains on a loop through the north end of the city to Atlantic Funeral Home.

Spectators were encouraged to wear red and white, and to respect social distancing measures while observing the procession.

READ MORE: Procession for Capt. Jennifer Casey to travel through Halifax on Sunday

Haligonians stood by to observe the motorcade as it travelled through the city, including military members and several people wearing Star Wars masks and Montreal Canadiens jerseys in a nod to Casey’s personal interests.

In the week since the crash, Casey’s family said she possessed a beautiful smile and a “positively infectious personality” that made her the ideal person to carry out a mission aimed at stirring hope during a time of uncertainty.

Friends and former colleagues have remembered her as upbeat, professional and enthusiastic with lasting pride about her hometown.

Casey’s “final journey home to Halifax” began on Sunday morning, according to a tweet posted from the official Snowbirds account.

The Snowbirds thanked Canadians and singled out the residents of Kamloops and local First Nations for supporting Casey, the squadron and Capt. Richard MacDougall, who was piloting the aircraft and survived the crash that occurred shortly after takeoff. The military has said his injuries are not life-threatening.

“Your love and support is very deeply appreciated, and will never be forgotten,” the tweet read.

Casey earned bachelor’s degrees in arts and journalism from Dalhousie University and the University of King’s College in Halifax, as well a master’s of interdisciplinary studies from Royal Roads University in Victoria.

Before joining the Armed Forces, Casey had a career as a radio reporter, anchor and producer in Halifax and Belleville, Ont.

She began her military career as a direct entry officer August 2014 and was assigned to the Snowbirds in 2018.

The military is investigating the May 17 crash, and Operation Inspiration has been suspended while the team’s jets are subject to an “operational pause,” the team’s commander said last week. Lt.-Col. Mike French said the events were the “absolute worst nightmare” for the Snowbirds.

Casey’s death is the latest in a string of tragedies to have touched the province of Nova Scotia in recent months, all during the COVID-19 pandemic that has claimed 58 lives in the province.

A gunman killed 22 people last month in a rampage that began in the rural community of Portapique, shocking residents of the area and Nova Scotians across the province.

It’s also the second time this month that the city of Halifax has observed a motorcade for a military member who called the city home.

The remains of Sub.-Lt. Abbigail Cowbrough, a Royal Canadian Navy sailor killed last month in a helicopter crash off the coast of Greece, were transported through the city by a police-escorted motorcade on May 11.

Thousands of people attended the motorcade for the 23-year-old Cowbrough, who was originally from Toronto but had lived in the Dartmouth area.