‘He knows all the customers by name’: Clock ticking for sale of Hillsborough, N.B.’s grocery store

The 71-year-old owner of Hillsborough, N.B.’s only grocery store says he still has hope the business will sell, but admits the clock is ticking.

You can find Terry Stafford doing all possible jobs within the Hillsborough Freshmart, including working cash, stocking shelves, helping employees and greeting and laughing with customers.

Stafford says there’ve been nearly a dozen inquiries about the sale of the business in the last month, but no one has signed on the dotted line yet.

“Next month is what I said and I want to (follow) through (with) that because there’s other things I need to do over the winter and get prepared for the last part of my life,” Stafford told Global News Sunday. “My wife is sick and that is a full-time job once I leave here.”

And while many customers love being able to catch up with neighbours and share a laugh with Stafford, they’re concerned about what will happen next.

“I think (closing) is going to be terrible, we’re going to miss it a lot,” said Reta Geldart, who was picking up some groceries. “I know a lot of people are.”

Stafford works seven days each week and puts in about 12 hours each day, and his presence doesn’t go unnoticed.

“Terry’s great, he knows all the customers by name; this place is a really important part of this community,” said customer Andre Arsenault. “Not only Hillsborough, but half a dozen communities up and down (Route) 114.”

“If we lose this, it’s going to be a ghost town,” said Clifford Geldart, one of Stafford’s former employees.

Stafford says the business is profitable.

But he leases the building and says that, along with cost, work and going through the Loblaw’s banner are some of the factors for people not wanting to purchase the business.

“It’s the image that’s taken a hit in Hillsborough,” said Stafford, the president and owner of the numbered company. “Would you buy a business in Hillsborough with all the other businesses are closing? There lies some of the problems.”

And if no buyer comes through, he’ll be losing money.

“If I have to sell this inventory off piece by piece and equipment piece by piece, it’s not going to be good for me,” Stafford said.

The Albert County Chamber of Commerce says in every small business owner’s situation, there can be some complex dynamics.

“It’s a bigger conversation than just succession planning,” says Micha Fardy, a co-chair for the chamber. “Collectively having a really good understanding of what those dynamics are within local economies, then we can actually build solutions around them and help facilitate the conversation for people who might be interested in coming in and investing in growing business.” 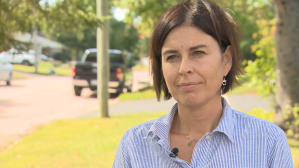 For Donn Reynolds, who was also picking up some groceries Sunday, he’s concerned about having to find a way into Riverview or Moncton to get what he needs to live.

“I’m quite concerned really because I don’t know how to survive without it; it’s handy,” he said. “I can bum a drive over here or get a drive over here, (but) going to town is a whole different ballgame.”

But Stafford’s positive outlook and spirit are contagious.

“We wanted to stand behind Terry as much as possible because he’s been good to all of us,” said Reta Geldart.

Stafford says he still holds out hope a possible sale will come through but says the light at the end of the tunnel is dim.

“I’d like to thank all the people in Hillsborough that supported me from day 1.”