What is ractopamine, the drug banned in China but permitted in Canadian pork?

China has asked Canada to stop exporting meat, over an issue with alleged “forged” certificates, after it said its customs officials detected the drug ractopamine in Canadian pork – which is prohibited in China.

Here’s what you need to know about the drug.

Ractopamine hydrochloride is an additive put into animal feed. It belongs to a class of drugs called beta-agonists, according to Ben Bohrer, an assistant professor at the University of Guelph, and president of the Canadian Meat Science Association.

What is it used for?

In Canada, ractopamine can be used on pork, cattle and turkeys. Animals that take the drug grow larger and leaner, and take less feed to get there. All this is good for farmers, as they can spend less money to get more meat from their animals.

It’s usually used to “finish” animals, getting in some weight gain in the last few weeks before slaughter.

“In the livestock production world, that’s really the major goal of most livestock producers: to produce a product that’s efficient,” Bohrer said. “They have low input costs or lower input costs, so they’re consuming less feed, and with less feed, they’re producing meat that’s both larger and leaner.” 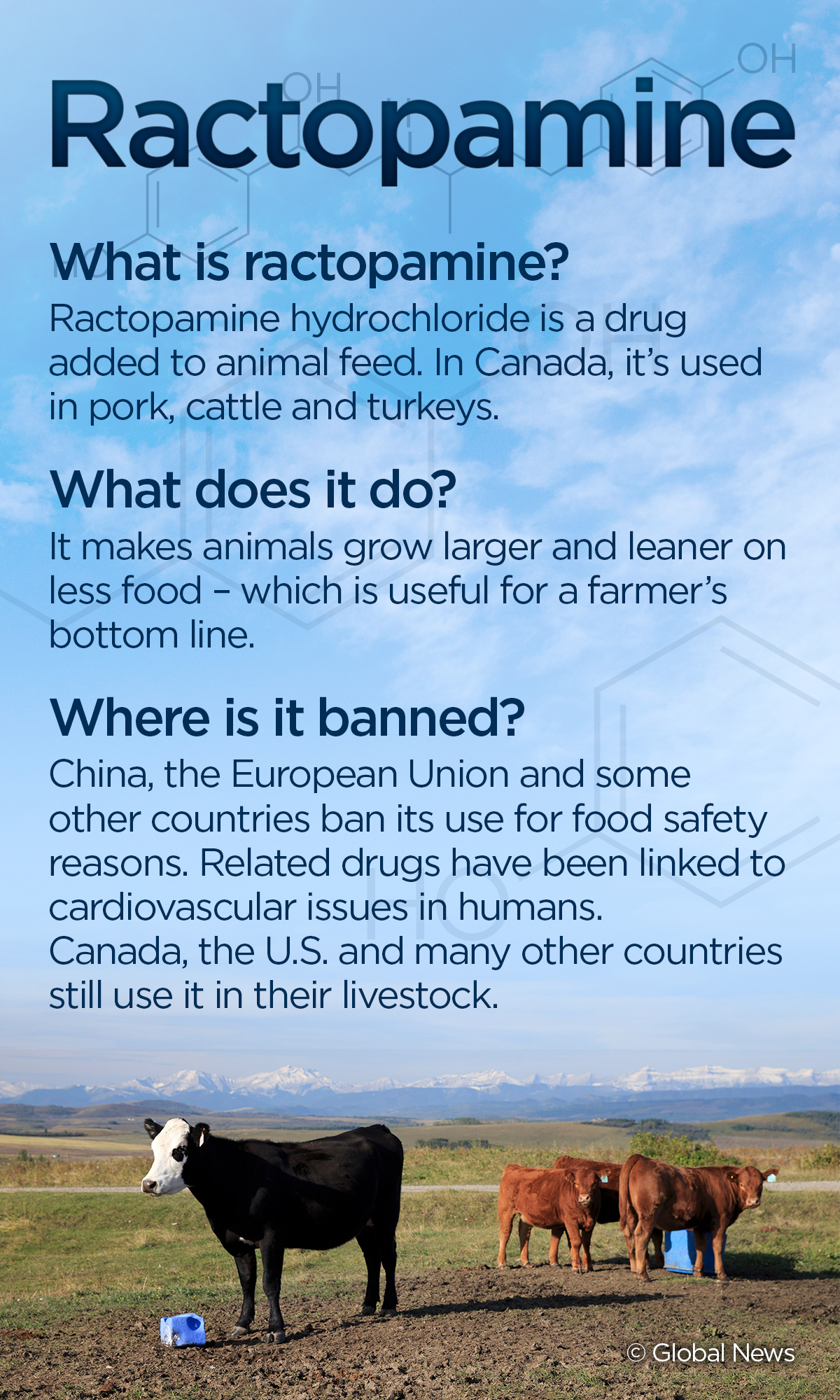 Why is it banned in China?

According to Bohrer, China lumps ractopamine in with other drugs from the beta-agonist family, which have been shown to have effects on human health.

“There are some beta-agonist products that have been shown to be very dangerous if they’re consumed,” he said. They mainly affect the cardiovascular system. “It will speed up heart rate, increase anxiety, those types of challenges.”

But Bohrer doesn’t believe that ractopamine should be grouped with some of these other drugs. It has a short “half-life” in the animal, he said. An animal stops getting fed eight to 12 hours before slaughter, he said, and by that time, most traces of the drug would have disappeared from its body.

“The feed has already been metabolized and it’s out of the animal’s system, so there’s not high enough levels in the meat residue that will cause any of those types of problems,” he said.

The European Union has also banned ractopamine, saying that the safety data isn’t good enough to support a minimum acceptable amount in meat.

Bohrer says the drug has been extensively tested and evaluated by U.S. authorities, a process that takes years and costs the drug developer a lot of money to go through.

Under an agreement with the U.S., he said, the Canadian Food Inspection Agency (CFIA) has accepted the FDA’s findings and permitted it for use in Canada, subject to certain limits and restrictions on the amount that can be given and when it can be fed to animals.

Health Canada said in a statement that it only approves veterinary drugs like ractopamine after “a thorough assessment of scientific evidence demonstrates the safety — including human safety — and effectiveness of the drug.”

How common is it in Canadian pork?

According to Bohrer, ractopamine is used in a relatively small percentage of Canadian pork.

“For the most part, because the export market is so reliant on countries like China, and China has banned the compound, it’s not fed to very many pigs.”

He estimates that somewhere between five to 10 per cent of pigs in Canada are fed ractopamine, maybe less, simply because it eliminates the opportunity for export. Around 22 per cent of pork exports, by dollar value, went to China in April 2019, according to Statistics Canada data.

The CFIA has a ractopamine-free certification program for Canadian pork, to help with exports. China is alleging that meat certified under this program contained ractopamine – a claim that Canada’s federal trade minister is now challenging, saying there is no proof.

— With files from Jesse Ferreras