U.S. federal law enforcement officials have arrested a person in connection with the explosive devices sent to prominent Democrats over the past week.

Florida man Cesar Sayoc, 56, who is known to police, was arrested Friday. DNA played a part in identifying Sayoc, and officials say his fingerprint was found on one of the packages.

Sayoc has been charged with five federal crimes and could face up to 58 years in prison. There is a possibility that there are more explosive devices “in transit,” said FBI Director Christopher Wray Friday afternoon, who warned that the threat remains very real.

“These are not hoax devices,” said Wray.

Sayoc had previous run-ins with the law, including an August 2002 incident for threatening to throw a bomb in a conversation with a Florida utility representative, Ronald Lowy, a Miami attorney who represented him, told the Associated Press. Dade County court records showed Sayoc served a year’s probation after a judge signed a discharge certificate in November 2002.

Lowy said that Sayoc “made a verbal threat when he was frustrated at a lack of service.” Lowy said Sayoc showed no ability at the time to back up his threat with bomb-making expertise.

WATCH: DOJ confirms a total of 13 pipe bombs were sent across the U.S.

Other past convictions included grand theft auto and fraud.

The lawyer said Sayoc was a bodybuilder then, and displayed no political leanings except for plastering a vehicle he owned with Native American signs.

A law enforcement official told Reuters other suspects are still being considered.

Video showed federal agents and police officers examining a white van, which reportedly belongs to Sayoc, in the parking lot of a business in Plantation, Fla., in connection to the investigation.

READ MORE: Here’s what we know about Cesar Sayoc, the pipe bomb suspect arrested in Florida

Read next: Grammys 2023: The brightest, boldest and best looks from the red carpet

The van, which had several stickers or decals on the windows, including American flags, pictures of President Donald Trump and Vice President Mike Pence and a sticker that said “CNN sucks”, has since been towed away by officials. (CNN’s New York bureau was the target of two of the mailed pipe bombs.) The stickers also show prominent Democrats or Trump critics with targets overlaid on them.

The FBI has been working with law enforcement officials across the country to find the culprit since the first package was found Monday night.

Trump praised the FBI and law enforcement for their quick response at an event at the White House Friday around noon.

“We will prosecute them, him, her, whoever it may be, to the fullest extent of the law,” he said.

“We must never allow political violence to take root in America – cannot let it happen,” he continued. “And I’m committed to doing everything in my power as president to stop it and to stop it now.”

Since then, another 12 packages – all sent in a brown package and with six stamps, and all with the return address of Rep. Debbie Wasserman Shultz – were sent to frequent Trump critics including former president Barack Obama, Hillary Clinton, current elected Democrats and other former Obama administration officials.

Read next: Grammys 2023: Beyoncé now the most decorated artist in Grammy history

The FBI has been searching a post office in Opa-locka, Fla. since Thursday night in connection with the incidents – and officials had found a package sent to Democratic Sen. Cory Booker at that facility.

Clapper said people who have been critics of President Donald Trump should be “on extra alert” and called the incidents “domestic terrorism” in a phone interview on CNN shortly after the package was found.

But he also said that “This is not going to silence this administrations’ critics.”

Clapper stressed that he did not want to suggest any direct link between Trump’s past rhetoric and the packages. But he said Trump should bear responsibility for the “coarseness and uncivility of the dialogue in this country.”

Trump has taken exception to the perceived link between his rhetoric and the intent behind the packages, even though FBI officials have not given a motive for the incidents.

“Funny how lowly rated CNN, and others, can criticize me at will, even blaming me for the current spate of Bombs and ridiculously comparing this to September 11th and the Oklahoma City bombing, yet when I criticize them they go wild and scream, ‘it’s just not Presidential!’” he wrote on Twitter Friday morning.

Later Friday, Wasserman Schultz asked Americans to reduce the political rhetoric to a minimum, calling it “grossly irresponsible” for politicians to continue to stir the pot.

Trump said Friday morning that the bomb scare is distracting from attention on the upcoming midterm elections.

“Republicans are doing so well in early voting, and at the polls, and now this ‘Bomb’ stuff happens and the momentum greatly slows – news not talking politics,” Trump tweeted, shortly before the news of an arrest was made public.

“Very unfortunate, what is going on. Republicans, go out and vote!”

Trump’s tone regarding the packages has shifted from initially calling for unity to later blaming the press for the divisive political climate.

Funny how lowly rated CNN, and others, can criticize me at will, even blaming me for the current spate of Bombs and ridiculously comparing this to September 11th and the Oklahoma City bombing, yet when I criticize them they go wild and scream, “it’s just not Presidential!”

In a statement released by his publicist on Friday, actor Robert De Niro, who also had a suspicious package addressed to him, called on people to vote after the scare.

“There’s something more powerful than bombs, and that’s your vote. People must vote!” he said.

The Oscar-winner has been one of Trump’s most vocal critics, dropping an expletive insult at Trump at this year’s Tony Awards and also apologizing to Canadians for the “idiotic behaviour of my president.” 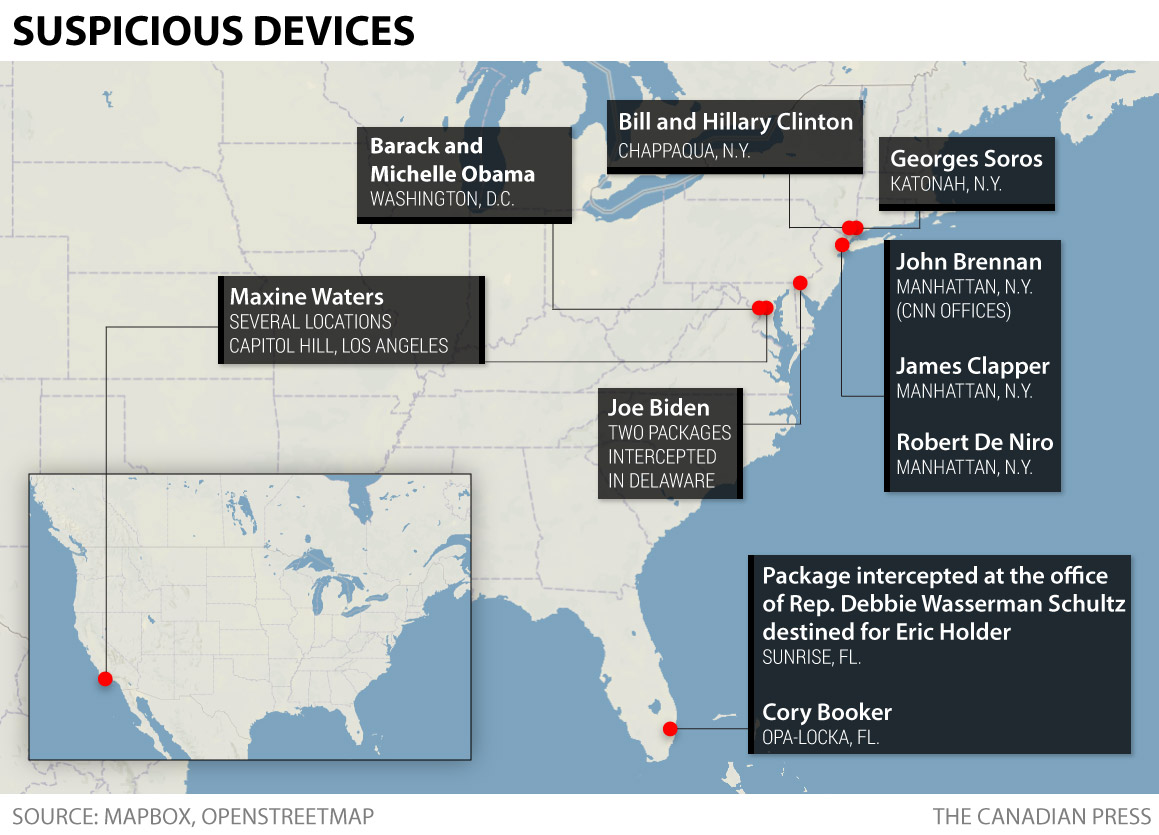 *With files from the Associated Press