Calgary police are looking to the public for help locating a man believed to be involved in the sale of a gun that was later used in a brazen shooting in a Superstore parking lot over the May long weekend.

Christian Joffre Ouellette, 20, is charged with two counts of first-degree murder in connection with the attack.

On Thursday, police said they are hoping to speak with a man who goes by the name of “Tyson” who is alleged to have assisted in selling a gun to Ouellette a few days before the shooting.

“This is what I would describe as a significant lead in the investigation,” Insp. Paul Wozney said at a morning news conference.

He stated that although the homicide unit had tried to contact Tyson, he had been “uncooperative.”

“We had a brief, brief contact with this person – but it’s very difficult to track them down when we have limited description and identity of him.”

Police don’t have a physical description of the man or a surname. They say he is believed to be “associated” to Ouellette.

“We know that there’s people in the community that know who this person is.”

Investigators believe at least one other person was involved in the sale of the gun.

“Our investigators have conducted dozens and dozens of interviews as part of this investigation, and every time we conduct an interview more information comes up,” Wozney said. “We are getting closer. We do know that there [are] other people involved in this offence and we’re doing our best to try to track [them] down.”
Story continues below advertisement

Anyone with information is asked to call Calgary police at 403-266-1234 or contact Crime Stoppers.

Investigators no longer searching for driver of yellow Ford Escape

Previously, police had been searching for the driver of a yellow Ford Escape who they believed had spoken with Ouellette at Nose Hill Park after the homicides.

On Thursday, Wozney said that police were no longer searching for the vehicle.

“The registered owner of that Ford Escape came forward and we were able to eliminate that person as a person that was involved in this investigation,” Wozney said. 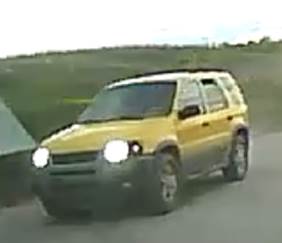