Bovine TB is a highly contagious bacterial disease that can lie dormant in an infected animal for years.

In late September, the United States Department of Agriculture notified the Canadian Food Inspection Agency (CFIA) that a case of bovine tuberculosis had been detected in a cow from Alberta.

The situation hasn’t been as crippling to the cattle industry as mad cow disease, but experts say it had the potential.

WATCH BELOW: Researchers in Saskatoon working on a vaccine to combat bovine tuberculosis

To-date, approximately 28,000 animals have been quarantined in southeast Alberta and southwest Saskatchewan.

“The agency has completed depopulation of all mature cattle from the 18 farming operations that were declared to be infected and has conducted screening tests on all these animals,” Dr. Harpeet Kochhar, the CFIA’s chief veterinary officer, said.

Cattle that reacted to the screening were humanely slaughtered and subject to an enhanced postmortem examination.

WATCH BELOW: Alberta rancher at centre of bovine TB quarantine speaks out

A total of 12 sites have now been freed of restrictions. As long as no new cases surface, officials say the investigation will shift to a single ranch outside of Jenner, Alta., where all six infected animals to-date have come from.

“While there is strong evidence there could have been high risk of disease spread, the initial tests results are showing a more encouraging outcome,” Kochhar said.

Instead of reacting to the situation, scientists are hoping to solve it. 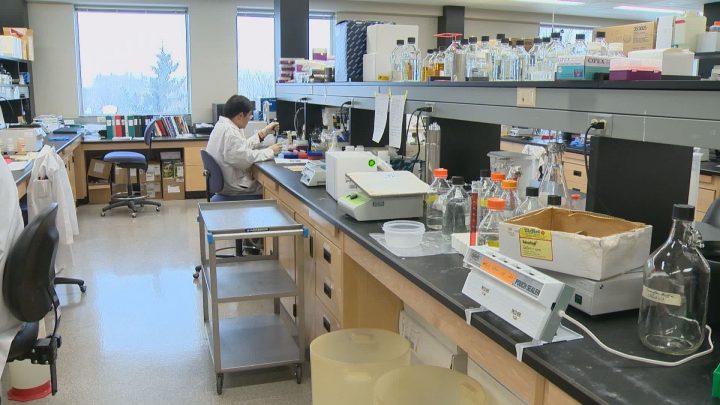 There is possibly only one facility in the country, a handful in the world that could develop a vaccine for bovine TB. The good news for Saskatchewan and the rest of the world is it’s here in Saskatoon and researchers have already started.

“We’re starting with bovine TB but obviously if it works there there’s no reason it should not work with human TB as well,” Dr. Andrew Potter, director and CEO of VIDO-InterVac, said.

According to Potter, bovine TB is exactly the same as human tuberculosis – it’s caused by a bacteria that usually affects the lungs.

There are many ways an animal can contract it but nose-to-nose contact is the most common. Wildlife like elk and deer can get it as well and humans can from ingesting meat or milk from an infected animal.

Potter says he and his team started their work on it more than a year ago and this week they will infect their first group of animals with the disease.

“We’re actually really excited about it because now the work is starting to move ahead and we will be quite literally testing vaccines non-stop for about the next two to three years.”

READ MORE: 6 things to know about the bovine tuberculosis outbreak in Alberta, Saskatchewan

If successful, the vaccine will be used not only in Canada but around the globe, a prospect that isn’t going to be easy. Billions of dollars have been spent on human TB vaccines and researchers are no closer to a vaccine today than they were 20 years ago.

“The approach we’re taking is to assume that we as scientists really don’t know anything and we’re going to test every vaccine component there is to see if we can protect against disease.”