One person was killed and several others injured in a massive explosion in Mississauga that completely destroyed one home and left 25 others damaged Tuesday afternoon.

Peel Regional police, firefighters and paramedics responded to the call of a house explosion at 4:20 p.m. on Hickory Drive near Willowbank Trail, in the Dixie Road and Rathburn Road East area.

UPDATE: Some evacuees allowed to return home a day after house explosion in Mississauga

Toronto Emergency Services told Global News one person was killed in the explosion, but they could not provide details on the person’s age, name or gender.

Tim Beckett, fire chief for the City of Mississauga, said the damage to neighbouring houses ranged from very light to extreme and there had been several injuries reported.

“Crews are working on stabilizing the scene … it is far too early to speculate what the cause is,” he told reporters at the scene, adding that emergency crews were working to evacuate people in the area and relocate residents.

“We are still in the stabilization mode. We have police, we have paramedics and we have fire on the scene that are dealing with the issue in the hot zone.”

A spokeswoman for the City of Mississauga said first responders continued to investigate the area Tuesday night, adding that 25 homes had been damaged in the blast. Utilities in the area had also been shut off as a precaution for emergency crews and residents.

“We have a large debris field in the area. We totally lost one home so you can imagine … Right now our focus is on stabilizing the scene,” Beckett said, adding that live wires and gas in the area were initially preventing emergency crews from accessing the site.

“So until we can get that taken care of, we are unable to access. We have to stabilize the buildings. There is a safety aspect for our crews and the other crews who are operating as well.”

Beckett said there were 50 firefighter staff at the site of the explosion, while paramedics had six units with 12 to 15 people on scene and there were an unknown number of police investigating.

City spokeswoman Lindsay Litzenberger said in a statement that a reception centre had also been set up for those affected at Burnhamthorpe Community Centre at 1500 Gulleden Dr.

Peel paramedics told Global News one person was found by firefighters at the scene without vital signs shortly after the explosion and a triage had been set up nearby to treat any other victims.

Multiple injuries from explosion. Extent of injuries u/k at this time. Avoid area. Update to follow. 2/2

Emergency crews said there are several people being assessed at the scene for minor injuries, while door-to-door searches are also being conducted.

Limited information is available and police said they have no word yet on the cause of the explosion or the specific number of injuries.

Hickory Drive has been closed for the investigation and police have set up a large perimeter around the blast zone and are asking people to avoid the area.

With files from Jeremy Cohn and Erica Vella 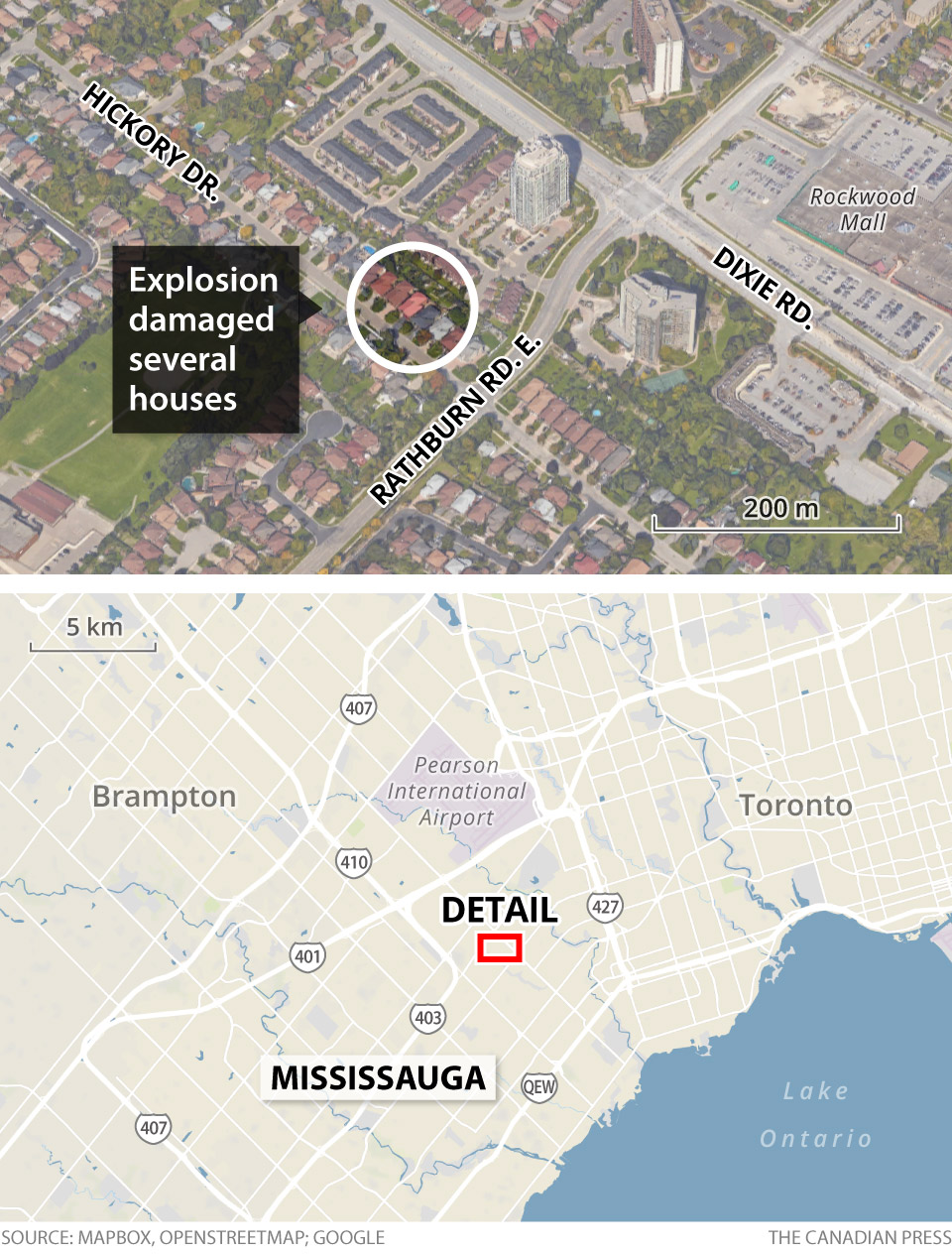 ALERT: At this time, it has been confirmed that 25 homes have been affected by the Hickory Dr. explosion. More updates to come.

ALERT: @enersourcenews and @Enbridge are cutting off utilities in the Hickory Dr. area to stabilize the site.

ALERT: @MiWayHelps is transporting people affected by the explosion to the Burnhamthorpe CC – 1500 Gulleden Dr. https://t.co/FW0m1LtRYb

Quite the sight as many windows in nearby high rise apartment building were blown out in the blast. #Mississauga pic.twitter.com/ftzvMwm3Zl

Reports of an explosion on Hickory Dr, Dixie and Rathburn Rd E. area, PRP, Fire and EMS on scene. Please avoid the area. Updates to follow.

I just heard a big explosion in Mississauga. pic.twitter.com/P20z0R4g8e

Video footage of explosion or fire in #Mississauga pic.twitter.com/JfTl0fU51i

Explosion in Mississauga? Right across from my condo? Anyone know what's going on? #BreakingNews #CP24 pic.twitter.com/3R7f9S07v8