How to build the Calgary Tower in Minecraft

If you have children between the ages of five to twelve, then chances are you know what Minecraft is. Now there is a two-part tutorial on how to build the Calgary Tower.

Parents have been baffled for years by the rudimentary pixelated graphics of the construction-focused game and the fascination that kids have with it. I cannot tell you how many times I have overheard conversations marveling at the irony that in this day and age, when kids have the option of playing video games with graphics that we could only dream of, that they choose to focus on a game that seems to be barely a step above Atari’s Pong. 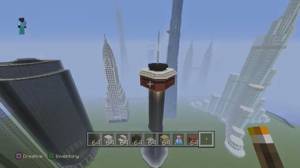 Equally as confusing to many parents is the way that kids will spend hours online watching other people play it.

In 2014, the BBC reported that gamer ‘Stampylonghead’s’ videos were getting up to 30-million hits per week.

This Calgary Tower tutorial is done by a gamer called ‘G.S.H.D. for the win.’ He focuses a lot on building famous landmarks.

While many parents may be confused by the popularity of this game, I think they can unanimously agree that it inspires creativity. Kids will build everything from roller coasters to villages, castles to….well, the Calgary Tower.

And although we’ll likely never understand how a zombie fits in to this whole process, it’s probably fair to say that this will not be the last time one generation is baffled by their offspring’s passions.