“I feel the sensations of being blown up again.” 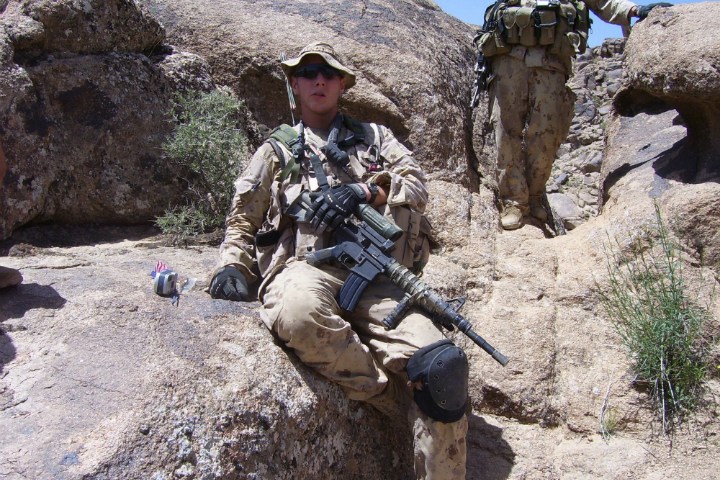 Malcolm Williams is no stranger to pain.

It was 2006 when Cpl. Williams, deployed to the Kandahar province of Afghanistan, drove over an improvised explosive device.

“It took me a few months for everything to kind of stop hurting as much. But now I have chronic pain from those injuries,” he said.

“My neck is always sore. I tore my rotator cuff in that incident, so my shoulder is always in pain, and my lower back has blown out discs from that incident.”

But while Williams was still in Afghanistan, symptoms of another injury began to show.

“On test-fires, I was jumping to the ground. When we would have rockets come in to the base or whatever, even though the base was really huge, I would jump to the ground when I would hear them,” he said. “I started not sleeping and when I would sleep, waking up not knowing where I was.”

Williams says he had trouble controlling his temper. “And you know, getting in a bit of trouble that way.” A photo of the LAV III Williams was in after the IED explosion.

He was diagnosed with PTSD while in Afghanistan. He says he felt isolated by his diagnosis, and didn’t want to talk about it with other soldiers.

“If you mention it on base that you have PTSD, it’s kind of like you have a disease,” he said.

Soldiers with PTSD could be taken out of their unit and put in a separate unit designed to help them with their disorder, but to Williams, it was another form of isolation.

“They handle you so that you’re not amongst the unsick.”

A return home, but no respite

Williams returned to Canada in August 2006. He was next posted to a base near Edmonton and was prescribed Oxycontin and Percocet to treat his constant pain.

Williams became addicted to the medications, and when he received a large lump sum payment (he says it was over $200,000) from the military because of physical and mental injuries, he spent it all on drugs.

He was scheduled to see psychologists at the time but didn’t always go: He didn’t like to talk about Afghanistan or his personal problems.

“Just bringing it up would always cause anxiety. And I was always having anxiety, so going to those appointments and talking about my Afghan experiences, that would just increase the anxiety even more.”

He was moved out of Edmonton in March 2007 and put on a “compassionate posting” in St. Catharines. It was closer to home, his family and his wife.

But that’s when things got worse.

“They offered me a professional at first, when I first got PTSD. And then when I moved from Edmonton to St. Catharines, there was about a year where I didn’t have one. Because I had just moved to the area. It was supposed to be all set up but it wasn’t. So for a full year I didn’t see a doctor.”

The Canadian Forces said it was offering help and claims Williams received “no gap in access to health services.” Williams, however, said he was put on a waiting list and that’s why he wasn’t able to see a doctor.

Williams got into a fight with his wife, got into his car and started speeding. A cop tried to pull him over, but the flashing lights of the police cruiser triggered a flashback, he says.

“I just went into a flashback and don’t remember driving, but I got in a high-speed car chase with them.”

“I’ll disassociate and start remembering and feeling the actual events happen again. I feel the sensations of being blown up again.”

Williams was so desperate that he attempted suicide.

“I just couldn’t take it anymore. The anxiety. My friends committing suicide. My friends that have died. Just the sheer anxiety of having that every day, drove me nuts.”

Getting help (after threatening to sue)

After the suicide attempt, Williams says his wife called the military demanding help for Malcolm. Williams said she didn’t think he was receiving adequate help from his doctor and threatened to sue.

“And then when she said that, that’s when they really started to take care of me,” he said.

Williams spent three months in Homewood Health Centre – a psychiatric hospital in Guelph, Ont. He was treated for his addiction and PTSD symptoms, including learning exercises and breathing techniques to help with his flashbacks.

“My time in Homewood was positive because it got me clean again and it got me thinking straight again,” he said.

The Canadian Forces paid for all of it.

Williams doesn’t have flashbacks anymore, but getting there was a “rough road.”  He was medically released from the military in February.

As part of his transition, Williams was placed in the Joint Personnel Support Unit, or JPSU, a Canadian Forces unit for ill or injured soldiers that works to prepare them for life outside of the military.

“The JPSU gives military personnel a new mission – to heal (recover), to regain their strength (rehabilitate) and to choose their best way forward (reintegrate),” according to the Canadian Forces website.

It doesn’t fit the usual image of a military unit; there’s no roll call or drills.

Soldiers can stay at home, and the military will assist in placing soldiers in work-related jobs.

He was in the unit for two years. “Then I was unable to continue because I was getting too stressed out,” he says.

How the military treats PTSD

He admits he doesn’t know exactly what should be changed about how the military deals with PTSD, but he thinks there’s room for improvement.

But despite the PTSD, chronic pain, car chase, suicide attempt and drug addiction, he doesn’t regret joining the military.

“I don’t regret it at all. I think what I’ve accomplished is pretty neat, you know. I’ve gone to Afghanistan and come back home alive. I’ve met some great people that I worked with throughout the years. Some of them are some of my best friends today and we still talk,” he said.

“So I can’t really say that I hate the military. Because I don’t.”