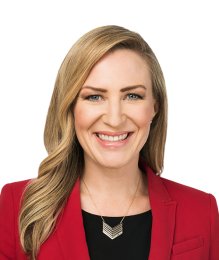 Erin was born and raised here in Edmonton, Alberta and is proud of “Our City.” Since graduating from NAIT’s Radio and Television Arts program, she has worked as an anchor and reporter in all three Prairie Provinces, eventually making her way back home to Edmonton in 2008.

In 2011, Erin was recognized with a National RTDNA Award for her continuing coverage of Maddox Flynn, a young Edmonton boy with cystic hygroma, a rare birth defect that causes a growth to form in the head and neck area. Her reporting won the hearts of Edmontonians and Canadians and was later featured on the Global News program 16X9.

Erin’s biggest goal is to provide the information people need and in doing so she hopes to make a difference in their life and/or the lives of others. She and her husband Chris married in 2009 and welcomed their son, Logan, in January 2011. Their second son, Luke, was born a couple years later.

WATCH: Erin answers a few questions for Global Edmonton viewers, including: what makes you laugh, and what do you do on your days off?

05:46
Global News Morning Edmonton
Dr. Jody Carrington on why Albertans, now more than ever, need to come together

05:04
Global News Morning Edmonton
Tim Caulfield on his new book ‘Relax, Dammit: A User’s Guide to the Age of Anxiety’

04:29
Global News Morning Edmonton
The rescue puppy that stole Erin Chalmers’ heart — and probably yours too

05:14
Global News Morning Edmonton
Psychologist Dr. Jody Carrington on handling the holidays — and your family — during a pandemic

04:49
Global News Morning Edmonton
Managing stress as we head into the holiday season

04:40
Global News Morning Edmonton
How to make sure you don’t strain your body this winter season

04:35
Global News Morning Edmonton
Parenting expert Maureen Dennis on small changes around the house that have a big impact

Former Humboldt Bronco opens up about mental health: ‘It’s OK to not be OK’

A year and a half after a horrific crash took the lives of 16 people, former Humboldt Bronco Tyler Smith shares his journey through grief and his progress towards healing. Continue reading →

Why more teens are turning to pornography to learn about sex

More and more teenagers are reaching for pornography to learn about sex. Continue reading →

Attention new moms: Why your fitness routine could be doing more harm than good

Having a baby can take a serious toll on a woman’s body, and some of the mixed messages women receive about postpartum exercise can be damaging — both inside and out. Continue reading →

Federal funds for Alberta infrastructure projects to be flowing soon

Federal Infrastructure Minister Amarjeet Sohi said he is waiting for the province’s wish list, and expects to sign an agreement to get the money flowing within a few weeks. Continue reading →

While cycling home from work, Bashir Mohamed got into an argument with a motorist that quickly escalated. Continue reading →

Erin Chalmers: A 13-month-old with a skull fracture and no one can explain why?

Global Edmonton reporter Erin Chalmers shares how an accident at an Edmonton day home changed how she chooses care for her sons. Continue reading →

As thousands of Fort McMurray residents return home after last month’s massive wildfire, one family is experiencing a loss like no other as they return to their home. While trying to flee the blaze, their 15-year-old daughter was killed in a highway crash. Continue reading →

It has been one year since Paula Stiles was found dead inside her Sherwood Park home. RCMP have confirmed her death was a homicide but still, no one has been arrested in her murder. Continue reading →

‘Where do you see yourself in 5 years? The majority of them say ‘dead”: KARE on work with indigenous women

“We spoke to a girl last week who had been groomed and lured and exploited in the sex trade, and was able to come out on the other end,” Const. Gillian Dunn said. “She said she had no idea it was a crime.” Continue reading →

Fire has destroyed much of the Italian Bakery on 118 Avenue in Edmonton. Continue reading →

Hundreds of Edmonton parents are frustrated and emotionally drained after Edmonton Public Schools once again decided to change the boundaries for Michael Strembitsky School in southeast Edmonton. Continue reading →

Four people were rushed to hospital in critical condition and another person with non-life threatening injuries after they were all exposed to high amounts of carbon monoxide Sunday afternoon, AHS said. Continue reading →

The giving continues for the Global Edmonton Give Me Shelter campaign

The horror, the confusion, the hope: A refugee family tells its story

A Syrian family, newly arrived in Edmonton, is thanking the city and the country for giving it shelter from the atrocities of war. Continue reading →

Domestic violence continues to be a problem in Alberta

UPDATE: Edmonton police tell Global News the girl has been located and she is back at home.

A blind dog and his “seeing eye cat” will soon be looking for a forever home after the pair was taken in by an Albe… twitter.com/i/web/status/1…