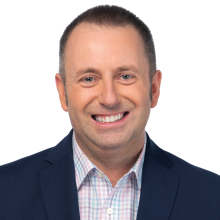 Born in Edmonton, Andrew was raised in Calgary where he “peaked” in high school as class president at Lord Beaverbrook. Not having a clue what to do with his life, he decided to give broadcasting a try.

Upon graduating from the broadcasting program at Mount Royal College, he took a job with “The Movie Show” as a production assistant where he had the opportunity to interview some of Hollywood’s hottest stars including Eddie Murphy, Sandra Bullock and Jeff Goldblum.

In 2005 he made the move to Citytv, where he worked as weather anchor/co-host on Breakfast Television, and earned his BSc in Meteorology from Mississippi State University in 2009.

Having been told his entire career he has a “face for radio,” Andrew is happy to now call 770 CHQR his new home.

He is known as a true foodie and is a huge fan of BBQ — 3 barbecues clutter the backyard. Andrew’s wife, Amanda, can often be heard saying, “Does it have to be smoked?”

A lifelong Stamps fan, Andrew has been the game day meteorologist for the team since the Wally Buono era. He is also passionate about the NBA and a Clippers fan, before Kawhi.

“I don’t know how to thank everybody. They’ve really restored my faith in humanity at such a terrible time,” said R… twitter.com/i/web/status/1…

The move would mark a further step in an EU plan to sever ties with the Anglo-Swedish company after it repeatedly c… twitter.com/i/web/status/1…