In one year, Canadians spent $908M on legal cannabis

Canada legalized cannabis on Oct. 17, 2018, becoming the second country in the world — after Uruguay — to legalize the drug. Demand initially appeared to outstrip supply as retailers warned of a pending shortfall of product.

Over the year, demand appeared to be highest in the sparsely populated Yukon where sales per capita led the other provinces and territories at $103, according to Statistics Canada. It was not able to provide data for Nunavut _ the only area without a physical store.

Prince Edward Island sales per capita were the second highest at $97, while B.C. ranked lowest at $10.

Throughout the year, Canadians’ access to cannabis stores increased. The number of retail stores jumped from 217 this past March to 407 in July, according to the agency.

Alberta boasts the highest number of stores at 176 and B.C. took second place with 57 stores. Nunavut had the fewest with zero, followed by Prince Edward Island and the Yukon, both of which have four.

Story continues below advertisement
Albertans enjoyed the closest proximity to a store of any province, with half of the population living within three kilometres of a cannabis outlet. That figure rises to 63 per cent for five kilometres and 70 per cent for 10 kilometres. 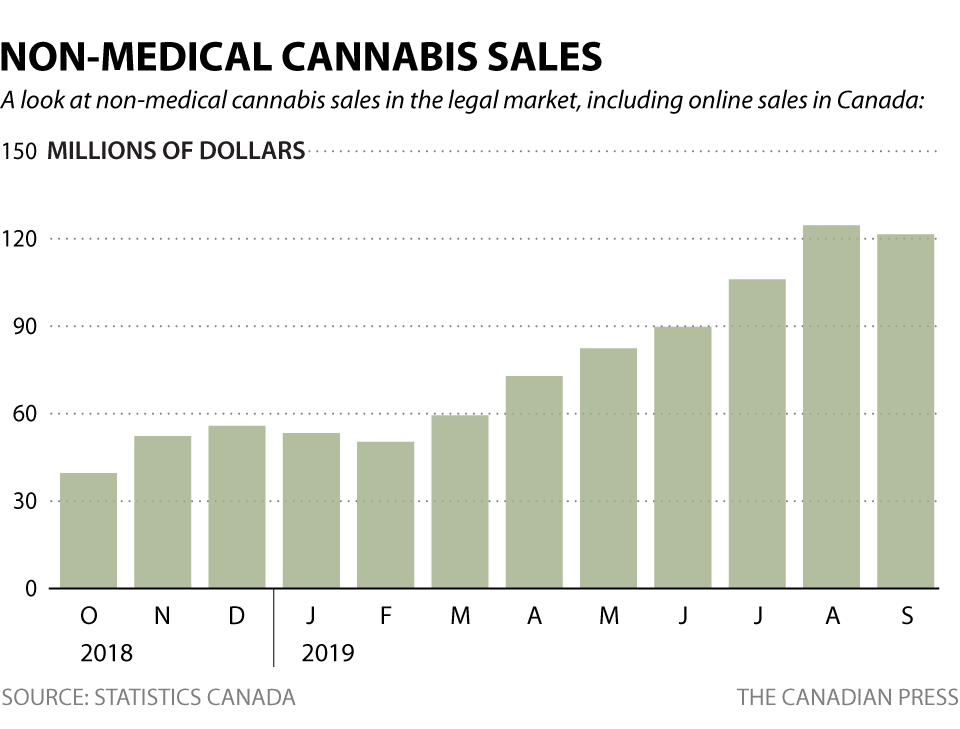 As the number of physical stores increased, the share of online sales dropped from 43.4 per cent in October 2018 to 5.9 per cent in September 2019.

“While online cannabis retail ensures access to all Canadians regardless of proximity to a physical store, accessibility continues to improve as more stores open across the country,” wrote Statistics Canada in its paper.

As of July, Canada had 407 cannabis retail stores, with the most being located in Alberta.

About 45 per cent of Canadians live within 10 kilometres of a cannabis store as of July, but that figure shoots up to encompass 70 per cent of the population in Alberta.