Parliament’s budget watchdog warns that rougher economic waters will mean a deeper federal deficit, with no certainty on how much deeper.

In a report Thursday, the parliamentary budget office downgraded its outlook for the country’s economy compared to its projections from June, citing weaker exports because of an ongoing trade dispute between the world’s two biggest economies — the United States and China — and increasing protectionism around the world.

Also factored into the downward economic outlook are spending cuts by Premier Jason Kenney’s government in Alberta amid lower spending across all governments in Canada, which the PBO expects will hit some of the lowest levels since 2008, in the worst of the global financial crisis.

The budget office’s report predicts the economic slowing will deepen the annual deficit by $1.6 billion, on average, through to 2025, creating a deficit of $21.1 billion when the current fiscal year wraps up in March 2020, and $23.3 billion in the ensuing 12-month period. The office expects the deficit will shrink to $11.1 billion in 2024-2025.

The worsened shortfall is the result, the budget office says, of lower tax revenues and higher operating expenses for the federal government than had been expected. When the economy is whirring along, the government collects more taxes and people generally call less on public services.

But all those numbers don’t reflect any new policy decisions, or promises made during this fall’s election campaign. Nor do they include future changes in spending by provincial governments, or a Canadian Human Rights Tribunal ruling that ordered the federal government to compensate Indigenous children and some family members harmed by failings in the child-welfare system — a package that could run into the billions of dollars. 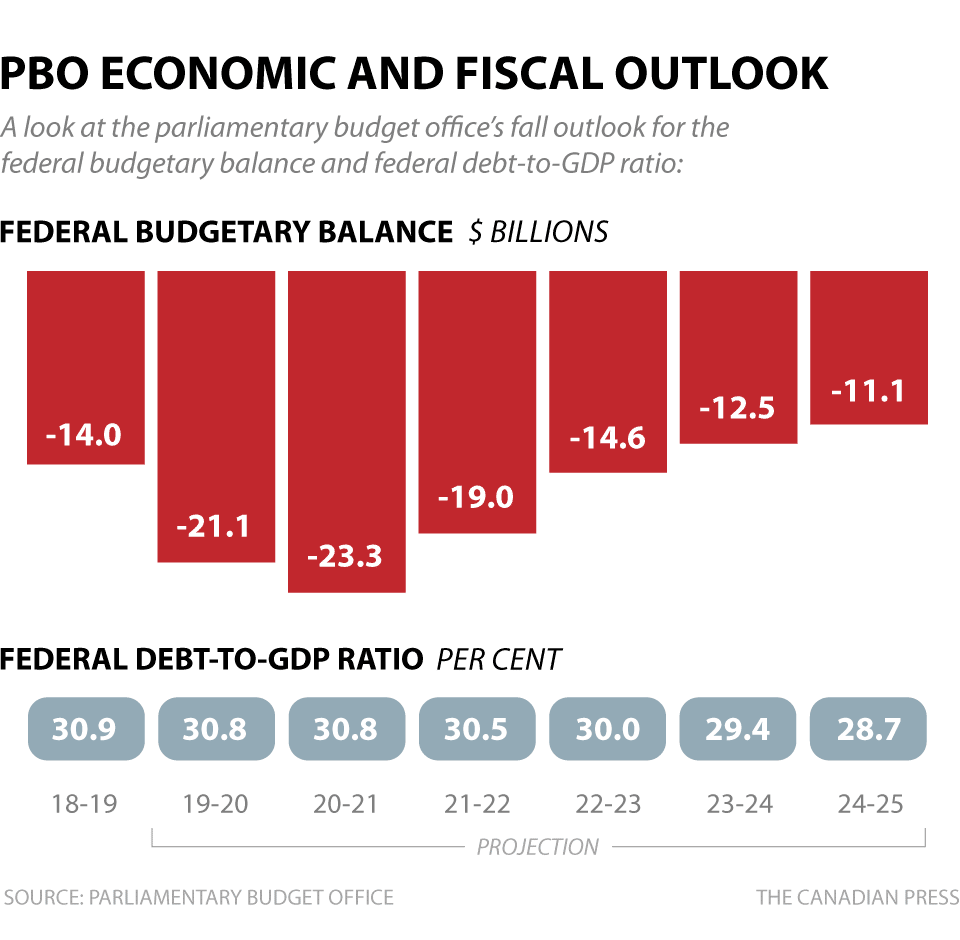 Add it all up and actual deficits over the coming years are expected to be bigger than the report projects based on currently known numbers making it “unlikely” the budget will be balanced by the 2024-2025 fiscal year.

The Liberals campaigned in 2015 on running deficits of about $10 billion before balancing the budget by the end of their four-year mandate. But they jettisoned that promise in favour of a consistent decline in the federal debt-to-GDP ratio, which compares government debt to the size of the overall economy.

The PBO report suggests warns that any new spending or changes in tax revenues could mean the ratio doesn’t decline as the government hopes. It also notes that the government hasn’t set any date for when it hopes to get back to balance.

The party’s 2019 platform forecast a deficit next fiscal year of almost $27.4 billion and $23.7 billion the year after, relying on the PBO’s forecasts from June.

The updated forecast wouldn’t shift the Liberals’ deficit projections too much in 2020-2021, but the PBO’s new numbers would add $4 billion to the deficit the year after — making it closer to $27.3 billion.