Roly-poly rat rescued after getting stuck in manhole cover

A roly-poly rat got itself into a bit of a situation after the rodent managed to squeeze only its fat backside through a hole, becoming stuck in a sewer grate in Germany.

An animal rescuer in Bensheim responded to a call of a paunchy rat stuck in a manhole cover on Sunday, and he enlisted some help from some volunteer firefighters to assist with the rescue attempt. 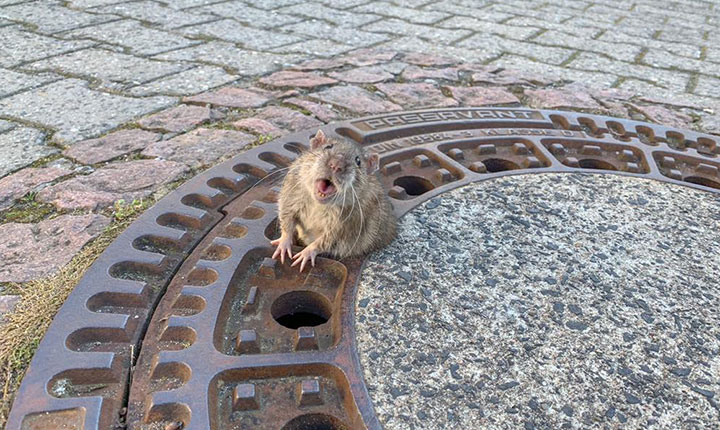 Video shows the plump rodent squirming around, trying to free itself from the cover. Firefighters wedged open the cover, while animal rescuer Michael Sehr worked to free the rodent, with no luck.

The rescue team then propped the manhole cover on its side as Sehr somehow managed to pop the portly rodent out the top.

“She had a lot of winter flab and was stuck fast at her hip — there was no going forward or back,” Sehr told local media, according to the BBC. “Even animals that are hated by many deserve respect.”

The animal rescue Berufstierrettung Rhein Neckar shared photos of the rescue on social media, receiving praise for rescuing the rodent.

“Thank you for rescuing her!” Petra Karlsson said. “Rats get such a bad reputation just because they happen to be tough survivors living next to us, but in reality they are highly intelligent, empathetic and loving even towards people if given the chance to trust us!”

“Thank you so much for saving the rat! I have two pet rats,” reads another comment from a rat lover.

The rodent was released back into the sewer with quite the story for his Ninja Turtle friends.