Calgary’s police chief admits he finds a recent spike in gun violence in the city “concerning.”

The Calgary Police Service (CPS) said Friday their Specialized Offender Unit is currently investigating 40 people believed to be involved with at least 55 shootings dating back to 2012, a number of unsolved homicides over the last five years and at least 17 reported violent home invasions within the last year.

The service said despite significant efforts and resources being dedicated to this issue, they have seen a recent increase in the group’s violent behavior.

“I am concerned, as every Calgarian should be concerned,” Calgary Police Chief Roger Chaffin said at a Friday news conference.

“When people behave this way, with such reckless disregard for human life, we should all be concerned about it.”

Over 20 people within the group have been charged with more than 100 drug and breach of conditions related offences since September 2016.

WATCH: The Calgary police are speaking out over an increase in violence in the city. Gary Bobrovitz reports.

“To date, the identified persons [in the group] are predominantly young men who have displayed zero regard for the safety of others, but even more alarming, have displayed minimal regard for their own safety,” Staff Sgt. Rob Davidson clarified. “This makes them extremely dangerous, violent and unpredictable.”
Story continues below advertisement

“The risk these individuals pose to bystanders and innocent members of our community is exceptionally concerning.”

While the overall number of shootings in the first half of 2017 is  slightly higher than 2016, police say the number of guns used and shots fired in these incidents has increased over recent years.

“There are more incidents involving multiple firearms and multiple rounds discharged,” police said in a Friday news release. “So far this year, more than 100 guns believed to be connected to crime have been seized and analyzed.”

READ MORE: Police say person of interest in Calgary burnt-car case had relationship with 1 of 4 victims

“Between mid-April and the end of June we had eight shootings that we believe are loosely connected,” Davidson said. “That resulted in 11 individual victims – unintended victims – being shot, many of whom have significant life-altering injuries.”

According to the CPS, gang and gun violence in Calgary can traditionally be tied to specific groups that target clearly defined oppositional groups, aiming to control the drug trade or criminal activity throughout the city.

Police characterize the group they’re focusing on now as being “very disorganized, fluid and lacking the hierarchy and structure of traditional gangs,” saying they do not self-identify under a specific name, or names.

“The violence is typically targeted to individuals within the group as allegiances fluctuation amongst the members,” Davidson said.

“It’s sort of motivated on three different levels that we’ve been able to identify: home invasion and extortion / kidnapping-type violence, which is used to generate individual profits. We have some violence which is retaliatory in nature between groups with individuals within the group that feel slighted within one way or another, and then we have some violence with is simply just around doing business in the drug trade to gain control.”

“We know that we have a small core group of people that are committing these offences, so our objective is to manage and monitor them.”

“We are not looking at a gang war, in my opinion. What we are looking at is a small core group of people that have very loose affiliations.”

“This is a major significant public safety issue and it’s being driven by a very small group of individuals.”

Are cuts to the Calgary Police Service impacting the fight against gun violence?

When asked how recent budget cuts to CPS are impacting officers’ ability to fight gun violence in Calgary, Chaffin described it as being “draining” for staff.

“The people in this service, the men and women who work here, are incredibly drained right now by what they’re trying to accomplish – so yes, we are concerned.”

“I can tell you this, our service is clearly one of the exceptional police services in this country. We are doing everything possible in terms of our investigative capacity … to make sure we deal with this problem, and I can guarantee we are dealing with this problem.”

Chaffin said the service is continuing to work with the Calgary Police Commission and city council to try to find “the best model possible to meet the demands of the day.”

Gun violence is a ‘city-wide’ issue

Davidson said while communities within central and northeast Calgary have the highest rates of gun crimes, gun violence is a “city-wide” issue.

The majority of shooting incidents occur on evenings and weekends.

May 2017 experienced the second-highest number of shooting incidents (13) in a single month for the past two years, only surpassed by January 2015 (15).

Police are encouraging the public to come forward and report any crime or gun violence they witness.

“Investigators believe that this is only a portion of the offences that are being reported to police,” Davidson said.  “Something as basic as reports of hearing gunshots or video from personal security cameras that may have captured an incident would be extremely beneficial.”

Calgary gun violence by the numbers:

*All statistics provided by the Calgary Police Service. 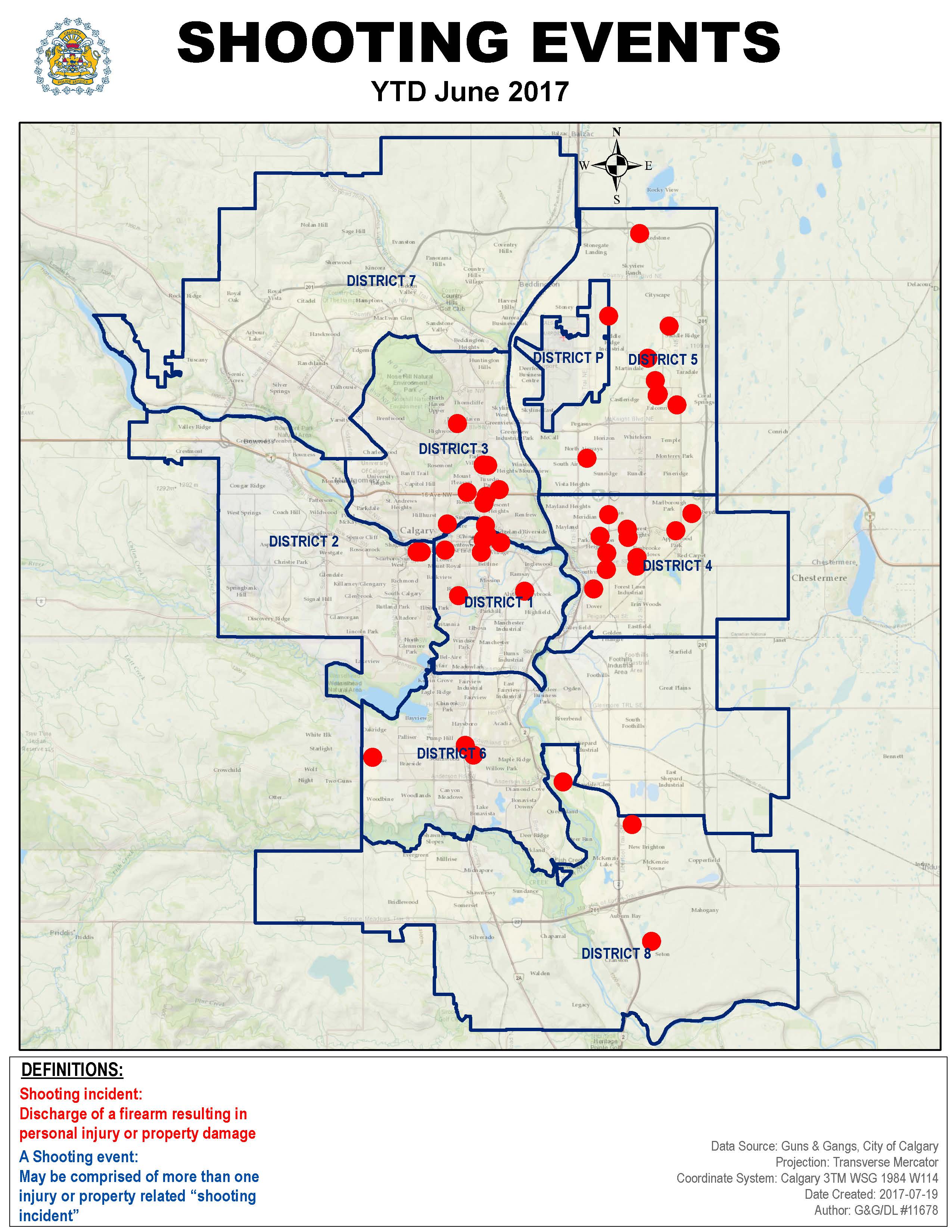