Over the past several years, O’Reilly has been accused of sexual harassment by various women. A story in the New York Times that Fox and O’Reilly had paid $13 million to settle with several women triggered a massive backlash against Fox News and resulted in a slew of advertisers fleeing his talk-news show, The O’Reilly Factor.

On Thursday’s episode of The Late Show, Colbert said he was “still reeling from the loss,” and launched into a happy dance. He asked his audience “this is reeling, right?”

Colbert noted that O’Reilly has many options available. “Bill’s broadcasting career may have hit a bit of a hiccup — and then exploded in a hail of blood and bone,” he said.

“But remember, Bill still has his books, he still has his rage, and his Fox News payout worth a reported $25 million. That is, if you do the math, that is twice as much as they paid his accusers.”

The host then added: “Oh my God, you know what that means? Bill O’Reilly sexually harassed himself!”

Trying to predict the possibilities of O’Reilly’s future, Colbert looked into his 1998 novel, Those Who Trespass, which tells the story of a TV news host who begins stalking and killing his colleagues after he’s fired.

Colbert mentioned that O’Reilly’s novel is dedicated to “the women in his life or as they are affectionately known, the plaintiffs.”

WATCH BELOW: Bill O’Reilly ‘will not be returning’ to the Fox News Channel

Colbert began to read a passage from Those Who Trespass: “Being on TV was like a drug to him and when it was taken away from him, he had to find a substitute drug … Planning and carrying out the executions of those people who had humiliated him.”

Tonight! Stephen Colbert wonders: what is #BillOReilly going to do now? #LSSC pic.twitter.com/dibyuNjuPv

After reading the passage, Colbert looked into the camera nervously and said, “Bill, buddy … hello, handsome!” 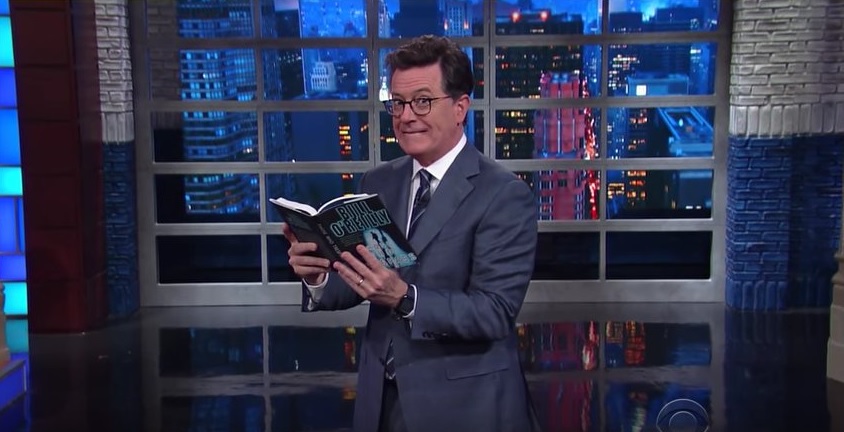 On Wednesday night, Colbert opened his show by addressing Fox News’ firing of O’Reilly, the man who served as the inspiration for the “Stephen Colbert” conservative pundit character who spent almost a decade hosting The Colbert Report.

Colbert admitted that he “owes a lot” to O’Reilly because he spent nine years playing “Stephen Colbert.”

“And then 12 months in therapy to de-bloviate myself. So tonight, we at The Late Show are proud to issue a statement from Bill O’Reilly’s biggest fan: conservative pundit ‘Stephen Colbert,’” he announced.

“Hello, nation, and shame on you,” the other “Colbert” said. “You failed Bill O’Reilly. You didn’t deserve him. All he ever did was have your back. And if you’re a woman, you know, have a go at the front, too.”

—With a file from Chris Jancelewicz