The month of March has been marked by a spike in Northern Lights sightings thanks to a coronal hole on the sun, producing strong solar winds.

Those winds hit Earth once again over the weekend where they interacted with elements in our atmosphere creating the beautiful Aurora Borealis.

Bright dancing lights in the night sky were reported late Sunday across much of Western Canada.

READ MORE: How to catch the Northern Lights this week in Alberta

According to the NOAA Space Weather Prediction Centre, the chances of seeing Northern and Southern Lights over the next few nights are quite favourable.

If conditions are right, a G1 or G2 geomagnetic storm will often produce moderately bright lights. 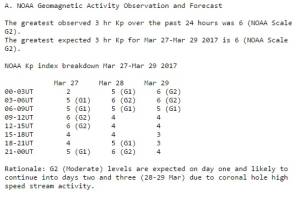 This means, for early Tuesday morning, there is a 90 per cent likelihood of being able to see Northern Lights over northern sections of almost all the Canadian provinces. The chances of seeing at least faint dancing lights extends as far south as the American border. 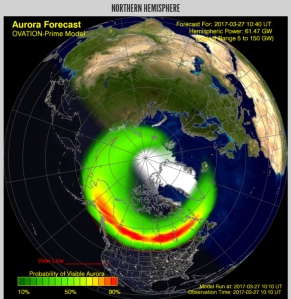 Upstream indications of aural activity are also a good way to gauge the likelihood of seeing the Northern Lights again Monday night.

READ MORE: Here’s how you can catch the northern lights this week

Many Canadian aurora chasers look to space meteorologist Tamitha Skov for updates on the aurora forecast. Her Twitter feed is busy Monday, as she has been flooded with reports of Aurora Borealis (in the northern hemisphere) and Aurora Australis (in the southern hemisphere) in time zones several hours ahead of Western Canada.

Fantastic! #Aurora confirmed in the Netherlands tonight due to this ongoing #solarstorm! Thx for reporting! https://t.co/80VejZJ4aQ

Magenta & green #aurora over Tasmanian skies during the onset of this #solarstorm! Thanks for reporting Sussan! https://t.co/L9SkJwxD1e