Airbnb: 3 things you need to know at tax time if you rent out your home

It was March of last year when Julius Cunanan first listed his Toronto condo on Airbnb. He has never looked back.

“I was looking for ways to generate income other than from employment,” said the 24-year old. Renting out his apartment over weekends and while travelling has done the trick.

In his first 10 months as an Airbnb host, Cunanan made nearly $4,000 in gross profits, money that’s helped finance a vacation to California and cover his monthly mortgage costs.

The young Torontonian is, in many ways, a typical Airbnb host — except for one detail: from Monday to Friday he works full-time as an accountant.

Speaking about the ins and outs of taxation on rental income, he makes it sound like filing taxes when you have Airbnb income is a breeze.

Unfortunately, that’s not how many other hosts feel. Declaring rental income is complicated in and of itself for the tax layman, and calculating income when you’re renting out just a portion of your house for part of the year can be downright daunting.

Airbnb advises hosts to “consult tax professionals regarding the income they earn through sharing their homes,” the company said in a statement emailed to Global News. It added that, “next week, we’ll be announcing new initiatives that will support Canadian Airbnb hosts during tax season.”

READ MORE: Ontario partners with Airbnb to inform users of rights and responsibilities

In the meantime, Global News teamed up with professional tax preparers to flesh out how it all works:

The first step is figuring out whether your Airbnb income is rental or business income. For the vast majority of hosts, it’s the first. In this case, they’ll need to file form T776 (Statement of Real Estate Rentals) and declare the income on line 126 of their federal return.

However, for the few who provide services such as meals and laundry (other than washing towels and linens at the end of the stay), Airbnb revenues are classified as business income, which requires a different tax form. The bigger catch if you have business income is that you’re responsible for CPP payments on that income, according to Turbotax, a tax-filing software company. Rental income, on the other hand, is not subject to CPP.

How to sort out expenses

As a landlord, you’re entitled to claim a number of rental expenses. These fall under two main CRA-defined categories: current expenses, which are generally lower cost and re-occur after a short period, and capital costs, which are normally higher and reflect more long-term investments.

Some current expenses are fully deductible and some need to be pro-rated, said tax lawyer David Rotfleisch.

Among the first are costs borne entirely for the purpose of supporting your Aibnb activity, such as cleaning expenses before and after a guest stay.

WATCH: Here are eight things you need to know to get through tax season pain-free.

Then there are things like mortgage interest costs, property taxes, home insurance and utility bills. If you’re renting out your whole house or all of a second home, you’ll have to calculate how many weeks or days of the year you’ve rented and use that percentage to prorate your costs.

For example: Cunanan, who rents out all of his apartment, started out on Airbnb on March 8, 2016, so he should count 299 days of business activity in 2016, rather than 366 days (2016 was a leap year and had an extra day). He had guests staying over for 66 nights. Sixty-six of 299 days in 2016 yields roughly 22 per cent, which is the percentage Cunanan can claim for current expenses that need to be prorated.

If you rent out only part of your house, you’ll have to calculate what percentage of your home you’ve been using for Airbnb and then multiply that for the share of booked nights in the year.

For example: let’s imagine that Cunanan only rented one room of his apartment and that the room took up 25 per cent of the space. Cunanan would be able to deduct 25 per cent of his expenses already prorated at 22 per cent.

The same math applies to figuring out the portion of deductible expenses for things like the cost of washing your guests’ linens and towels, said Rotfleisch.

“If you do a reasonable computation of how much it cost you to do laundry to clean the linens and the towels, the CRA is not going to challenge it,” he added.

The key, he said, is to keep all receipts as well as records of your computations, in case of an audit.

As the name implies, these expenses with lasting effects will need to be capitalized, that is, deducted gradually over the years rather than all at once.

Expenses over $500 to buy furniture for exclusive use by your Airbnb guests is a clear-cut example of something that would qualify as a capital cost, said Cunanan, the Airbnb host and accountant.

READ MORE: 6 overlooked tax deductions and credits that could score you a big return

When it comes to repairs and renovations, however, the line is more blurred.

If you’re renting part of your primary residence and are doing major renovations on the whole house, those costs wouldn’t be deductible, said Rotfleisch. The same holds for routine repairs.

On the other hand, upgrades specific to your rental property would likely qualify as capital expenses, as would repairs required by damage caused by guests, Rotfleisch noted.

READ MORE: 5 cheap home renovations that will give you lots of bang for your buck

Below is an infographic of how Cunanan is approaching is Airbnb taxes this year: 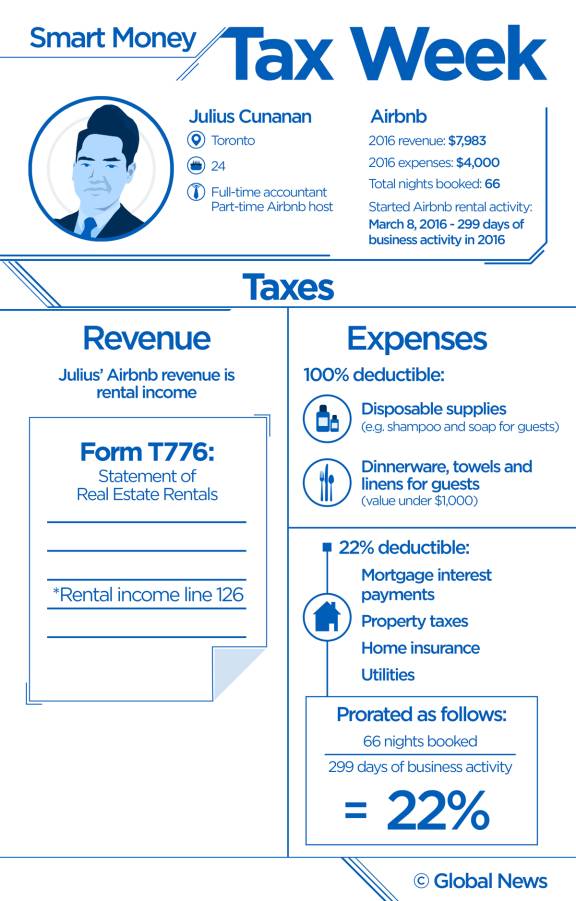