A look back: 1996 ‘Snow Storm of the Century’ hits Vancouver and Victoria

When some Victoria-area residents opened their front doors 20 years ago today, they were greeted by a wall of snow as tall as a small child.

It was the height of a blizzard meteorologists at Environment Canada called the “Storm of the Century.” Almost 124 centimetres of snow had fallen so far that month in Victoria, with 65 centimetres coming down in 24 hours on Sunday, Dec. 29, 1996.

Many on the West Coast had never seen anything like it.

Metro Vancouver and Vancouver Island were virtually shut down. Cars were buried under several feet of snow, Highway 1 was closed, transit was paralyzed, airports were all but closed and the army had been called in.

Even a Vancouver Canucks game against the San Jose Sharks was cancelled; however, a Broadway production of Cats at Queen Elizabeth Theatre went ahead as planned.

WATCH: Record levels of snow accumulation took its toll on Vancouver on Dec. 29, 1996. From the archives, John Daly reports:

Then NDP MLA for Vancouver-Kensington, Ujjal Dosanjh, said at the time the province was on the brink of establishing a state of emergency.

“We’re doing everything short of actually declaring a state of emergency. We’ve talked to the military, they’ve indicated 100-plus personnel could be utilized,” Dosanjh told BCTV during the storm.

Meanwhile, high winds and blowing snow stranded hundreds of motorists in the Fraser Valley, with some stuck in their cars for as long as 17 hours before rescuers reached them.

Cheryl Tolsma, then 27-years old, ended up entertaining 89 of those stranded drivers over that weekend.

“When the police officer came to our door, he said probably around 50 would be coming, and we said ‘okay, we’ll deal with that,’ but they just kept coming and coming and coming,” Tolsma said in an interview with BCTV at the time.

Some 300 more spent the night in an Abbotsford church.

WATCH: From the archives, Lynn Colliar reports on hundreds of stranded motorists in Abbotsford.

Elsewhere in the Fraser Valley, a barn roof collapsed under the weight of snow, killing and injuring dozens of cows.

But it was southern Vancouver Island that was hardest hit by the snow. The Victoria area received almost twice as much snow as Vancouver, with 95 centimetres falling between Dec. 27 and Dec. 29. 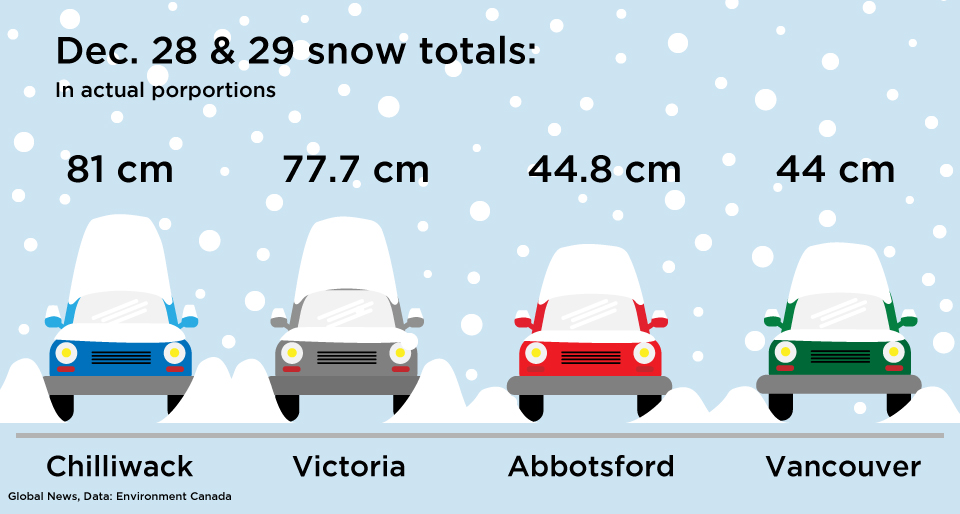 The weight of the snow mixed with rain on Dec. 30 caused the roof of an airplane hanger to collapse at Victoria International Airport, destroying several airplanes and putting 80 employees out of job.

Current Global BC Legislative Bureau Chief, Keith Baldrey, recalls the eerie tranquility of Victoria in the midst of the storm.

“The most memorable part of that storm was how quiet Victoria had suddenly become,” Baldrey said. “There was no vehicle noise because streets were impassable for at least two or three days. The only noise you could hear was from a colony of California sea lions, which had set up home on nearby Trial Island. Their barks were very loud and constant, which sounded surreal.”

“Neighbourhoods turned into alpine villages, where everyone either skied or towed sleds everywhere. The streets shrunk to become narrow paths down the middle of the road. And everyone was in a very good mood, since few people went to work and most simply played or hiked in the snow. A wonderful time!”

Global BC Chief Meteorologist Mark Madryga, who was working as a forecaster with Environment Canada and BCTV then, also remembers the storm vividly.

He watched as an “incredible amount of moisture” came up from the southwest and combined with bitterly cold Arctic air to create the “Perfect Snow Storm.”

“There was no doubt we’d be hit extremely hard,” Madryga said.

The accumulation piled on top of an existing layer of snow from previous storms, reaching historic levels. By the night of the 29th, the air warmed and created freezing rain by Monday morning.

“At Environment Canada, it was catalogued as the ‘Storm of the Century.'”

All in all, during the month of December that year, Chilliwack received 169.9 centimetres of snow, Victoria had 123.9 centimetres, Vancouver had 80.7 centimetres and Abbotsford had 77.8 centimetres.

View more photos and video below:

WATCH: The weight of snow caused roofs at a Vancouver marina to collapse, sinking dozens of boats.