Two parents accused of killing their teenage son pleaded not guilty to first-degree murder in a judge-alone trial Tuesday.

One paramedic testified Emil Radita told her he called EMS four hours after he found his son lying in bed, emaciated and cold to the touch.

Scroll down to read tweets from court in our live blog

Police were called to the Radita home in the community of Citadel on May 7, 2013. The 15-year-old was found dead inside.

The first witnesses in the trial were officers and paramedics who attended the home; photos of the crime scene were shown in court.

Paramedic Deborah Baumback said there were between 15 and 20 people at the Radita home when she arrived. She said they were “praying and chanting.”

Baumback said she went upstairs to find Alex in a bed in the middle of a room. Two men were also in the room, including Alex’s father, and Baumback said she asked the other man what was going on. She said he replied, “no English.”

“I recall the patient being…on the bed,” Baumback said. “Covered up to the neck under the blanket.”

“I actually remember walking in the room thinking, ‘what the hell is that?’ … His eyes were open, staring at the ceiling.”

Baumback said Alex looked “mummified.” She uncovered him to find he was wearing a diaper and a T-shirt.

She described him as “extraordinarily skinny” and “extremely, extremely emaciated.”

“Every rib could be seen,” she said. “He was cool to the touch.”

Despite efforts to resuscitate him, Alex was declared dead by paramedics on scene.

“He told me that the patient had been diagnosed with diabetes a month earlier,” she said.

Baumback testified Alex’s father also told paramedics Alex was on two types of insulin and that he had chronic diarrhea.

Alex’s dad told Baumback he came home at 6 p.m. the night before, saw the patient in his current state, called the church over, then called EMS at 22:07—four hours later.

She testified she asked when the last time Alex saw a doctor. His father said a month ago, when he said his son was diagnosed with diabetes.

Court had previously heard in the Crown’s opening statement that Alex was diagnosed with diabetes when he was three years old.

A Calgary police officer who searched the home said she was looking for items related to treating diabetes, and found several boxes of insulin syringes, which were nearly full.

Cst. Jean Dewitt said officers seized baby food from the home, and believed that’s what the teen may have been fed.

A letter believed to be written by one of Alex’s siblings was found in a recycling bin outside the home. In part, the letter said the boy saw his brother’s face and it was “scary.” The letter said he grabbed his hand and prayed, then looked at his face and “he looked dead.” 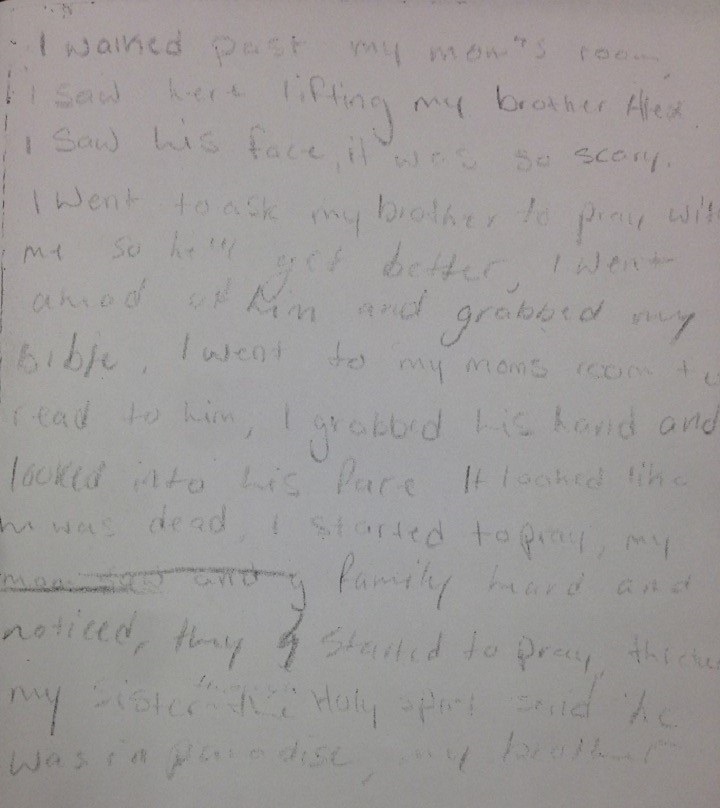 Global’s transcription of the letter presented in court Tuesday:

“I walked past my mom’s room, I saw her lifting my brother Alex. I saw his face, it was so scary. I went to ask my brother to pray with me so he’ll get better, I went ahead of him and grabbed my bible. I went to my moms (sic) room to read to him, I grabbed his hand and looked into his face. It looked like he was dead, I started to pray, my family heard and noticed, they started to pray … the Holy spirit said he was in paradise, my brother.”

An autopsy revealed Radita died from a bacterial sepsis (Staphyloccus Aureus) from complications of neglect and starvation, due to the Type 1 diabetes.

Alex was diagnosed with diabetes when the family lived in British Columbia.

Crown prosecutor Susan Pepper alleged the young man didn’t receive adequate care from his parents, and that a doctor was concerned the Raditas were faking blood sugar readings to make Alex appear as though he was fine.

Pepper said records suggested a steady decline in purchases of diabetes-related supplies. She said Alex was isolated from society, both physically and “psychologically confined.”

The prosecutor alleged the Raditas failed to provide the necessities of life, and the boy died “painfully” and “profoundly lonely.”

Court documents show Alex had been removed from the Radita home by child welfare because the parents weren’t properly treating the diabetes. A judge later returned him to his parents’ care.

The union for social workers in B.C. told Global News the Radita file had been closed prior to the family leaving the province, which absolved B.C. officials of the responsibility to tell any other jurisdictions.

Officials in Alberta said they were never made aware of a need for Child and Family Services involvement to monitor Alex’s treatment.

Calgary police allege Alex was not given the necessary treatment once the family moved to the city, and the teen’s health declined to the extent that he was confined to his room and subsequently died.

He was home-schooled and did not have a family doctor in Alberta, and police allege he had never seen a physician in the province.

Although the motive for allegedly not providing treatment is unknown, police said they didn’t believe it was based on religious beliefs.

“It’s totally unconscionable that a person with diabetes—be it Type 1 or 2—would die from not receiving proper treatment,” said Lau in 2014, after police announced the charges.

The trial is scheduled to last five weeks.

LIVE BLOG: Global News’ Jill Croteau is live at the trial of Emil and Rodica Radita, who are charged with first-degree murder in the 2013 death of their diabetic son, Alex Radita.

With files from Jill Croteau