Patients put on high doses of opioids are 24 times more likely to die because of them than people prescribed lower doses of the drugs, a new study finds.

Men are 50 per cent more likely to be put on a high dose, and twice as likely to die by opioid-related causes, than women are.

One in 27 men on more than 200mg of morphine equivalent a day — about 40mg of hydromorphone or 120mg of oxycodone — died because of those drugs.

“It means that a man taking high-dose opioids is more likely to die from his medication than almost anything else,” said David Juurlink, an internist and head of Clinical Pharmacology and toxicology at Sunnybrook Health Sciences Centre and one of the study’s authors.

The study, funded by the Ontario Ministry of Health and Long-Term Care and the Institute for Clinical Evaluative Sciences and published Thursday in PLos One, followed 32,499 Ontarians for 13 years. Its findings, tying potent painkiller prescribing directly to chronic, high use and death, come amid increasing evidence that provinces’ one-drug crackdown three years ago did nothing to stem Canada’s prescription opioid epidemic. A Global News analysis found prescriptions have skyrocketed in Ontario, Alberta and elsewhere, even as opioid-related deaths continue to rise.

READ MORE: Opioids kill hundreds of Canadians a year — why are doctors prescribing so many? 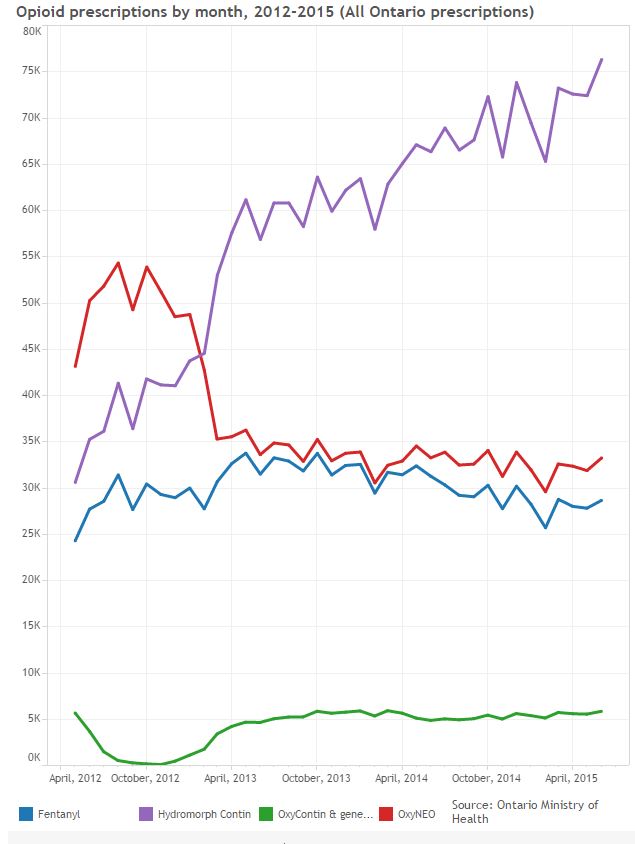 A series of Fentanyl deaths and overdoses across the country have put police and health authorities on alert amid warnings that Fentanyl, hundreds of times more powerful than heroin, is being cut into drugs that people are taking without knowing how strong they are.

But this week’s study underscores what many physicians have been saying for years: More than just a problem of illicit drug trafficking, Canada’s fatal pill problem is closely tied to the prescribing practices of doctors whose job it is to heal patients.

Ten per cent of the patients followed became chronic opioid users;  about 2 per cent of them were escalated to high doses. One in 550 died of opioid-related causes.

The risk of death from drugs doctors prescribe “is really quite exceptional,” said Juurlink said — especially considering how common it is to see patients on high doses of these drugs.

“One in 25 patients in a definable demographic is going to die from the therapy. … It’s the first time that anything of this sort has been documented.

“The idea that one of every 45 women or one of every 25 men is going to die as a result is just astonishing.”

It’s a tough issue to tackle: People in pain need treatment. And many more effective, less risky forms of treatment — physiotherapy, for example — aren’t covered under most health plans.

“It’s hard to overstate the importance of doctors thinking twice before they put patients on opioids, especially before they start ramping up the dose,” Juurlink said.

READ MORE: What actually works in the war on drugs?

But so far, they haven’t. In the years since OxyContin was replaced by a “tamper-resistant” alternative that many insurance plans don’t pay for, opioid prescriptions have only risen.

“I think if doctors aren’t going to do it voluntarily, some external force is going to have to be brought into play,” Juurlink said.

But the people in a position to wield that external force have so far been reluctant to do so. Ontario Health Minister Eric Hoskins said last year he doesn’t see a need to crack down opioid prescribing; Ontario’s College of Physicians and Surgeons referred questions to a national pain centre at McMaster University, which just began a two-year process of updating voluntary pain prescribing guidelines.

“What we really need is better drugs for pain and more research into alternative therapy. But that’s not going to happen overnight.

“And if  we don’t do something about this very soon … we’re going to see more and more patients dying.”

WATCH: Are doctors prescribing too many opioids?