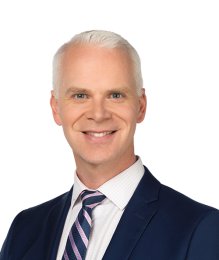 Fletcher Kent was Global Edmonton’s longest-serving reporter before becoming the newsroom’s managing editor in the fall of 2021.

He joined the station in October of 2002.

Before coming to Edmonton, Fletcher worked at several television stations in Regina and Saskatoon and even spent some time working on a cruise ship. During some Edmonton winters, he sometimes questions why he ever left that job.

Fletcher loves talking to people and hearing what is important to them. He feels honoured to be entrusted with telling their stories to Edmontonians.

Fletcher was born in St. Albert but grew up in Regina, where he received a journalism degree from the University of Regina.

In his spare time, Fletcher enjoys spending time with his family. He’s also a hobby photographer and appreciates all the beautiful scenery Alberta has to offer. Fletcher in action at the 2012 Capital Ex Parade