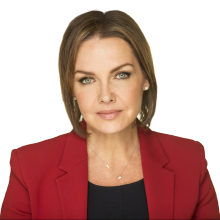 Award-winning journalist Dawna Friesen is the anchor and executive editor of Global National, the flagship national newscast for Global News.

During her more than 30 years as a journalist, Friesen has been everywhere from small town Canada to the front lines of history.  Most recently, Friesen anchored Global News’ coverage of America Votes 2016 from Washington, D.C. when Donald Trump was elected President.

Prior to joining Global National, Friesen was a senior foreign correspondent for NBC News, based in in London.  During her 11 years there, she travelled extensively across Europe and the Middle East, covering the wars in Afghanistan and Iraq, spending months in Israel and Gaza during the conflict there, following the disappearance (and murder) of journalist Daniel Pearl in Pakistan, and covering events in Russia, including terrorist attacks in Moscow and Beslan.

Her work appeared on NBC Nightly News, Today and MSNBC, and she won an Emmy award for election night coverage when President Barack Obama won his first term.

Prior to that, Friesen worked her way up through the ranks as a journalist in Canada, including as a Parliamentary correspondent for CTV News, a national reporter in Toronto and back-up host for Canada AM,  a reporter for CBC News in Saskatoon and Vancouver, and at radio and TV stations in Brandon, Manitoba, Thunder Bay, Ontario and Winnipeg.

Friesen returned from London in 2010 to join Global National, and has since anchored many breaking new stories on location, including the shooting at the mosque in Quebec City, the wildfires in Fort McMurray, Alberta, and the shooting deaths of RCMP officers in Moncton, New Brunswick, and the terrorist attack in Paris, France.

Born in Winnipeg, Friesen grew up on a farm and studied communications and journalism at Red River College. In 1993, she received a Southam Fellowship for Journalists from the University of Toronto and in 2009, the Distinguished Alumni Award from Red River College.

In 2015, the Global National team won Best National Newscast at the 2015 Canadian Screen Awards (CSA). In 2013, Global National was awarded the Edward R. Murrow Overall Excellence Award for Network Radio and Television, becoming the first Canadian program to earn that recognition in the award’s 42-year history.  In 2011, she won the Gemini Award (now CSA) for Canada’s Best News Anchor.

Friesen is an active supporter and advocate for the Alzheimer Society of Canada. When she’s not in the office, she enjoys staying up to date on world events, reading, travelling, and spending time with her son.