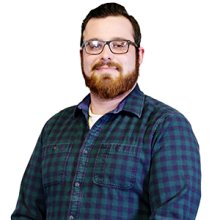 Brad Wisker is the producer of 630 CHED Mornings with Chelsea Bird.

Brad grew up in Ottawa and developed an interest in crime-related stories at a young age, as his father was a homicide investigator for Ottawa Police.

Brad attended the Algonquin College radio-broadcasting program and was later hired as the overnight-weekend news anchor for 580 CFRA in Ottawa.

After moving to Grande Prairie and Red Deer, Alta., he joined 630 CHED and iNews880, where he has had the opportunity and pleasure of working in one of the busiest newsrooms in Alberta’s capital.

Highlights include covering the Fort McMurray wildfire and the trial of Travis Vader.