A spokesman for Burkina Faso’s security ministry identified the man as Kirk Woodman, who works for the Vancouver-based Progress Mineral Mining Company.

Woodman’s LinkedIn profile identifies him as being from Halifax, N.S.

READ MORE: Worried about travelling? Steps you can take to increase your security

Spokesman Jean Paul Badoum said Wednesday that the employee was abducted overnight during a raid on a mining site in Tiabongou, about 20 kilometres from Mansila in Yagha province. 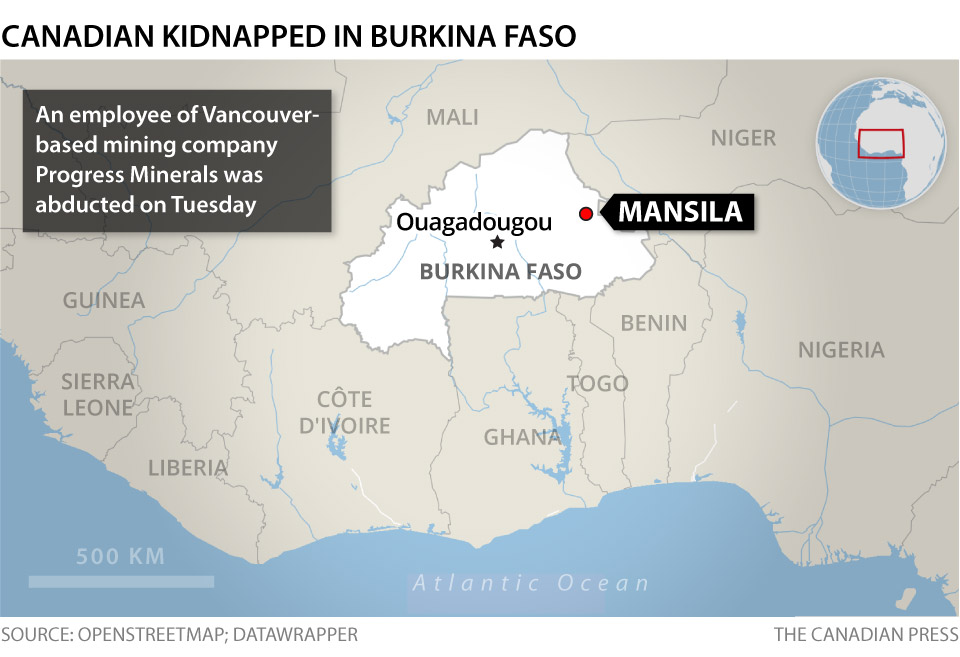 “The Canadian agencies involved in this situation are really aware of this situation, and we’ll be in contact with the family,” she told reporters in Repentigny, northeast of Montreal.

In a statement, his family asked for privacy and said they will not be speaking publicly.

“We have faith and trust in Canadian authorities to bring our husband and father home safe. We are hopeful for a fast resolution to the situation,” they said.

Tweet This Click to share quote on Twitter: "We have faith and trust in Canadian authorities to bring our husband and father home safe. We are hopeful for a fast resolution to the situation," they said.

The news comes soon after a 34-year-old Quebec tourist and her traveling companion were reported missing in the west African nation.

Sherbrooke native Edith Blais and her Italian friend Luca Tacchetto, 30, were travelling by car in southwestern Burkina Faso when all communication with their families abruptly ended Dec. 15.

A statement by Security Minister Clement Sawadogo referred to the disappearance of Blais and Tacchetto as a kidnapping.

West Africa’s Sahel region has seen a number of abductions of foreigners in recent years by extremists linked to al-Qaida or the Islamic State organization.

Burkina Faso recently declared a state of emergency in the region as attacks by Islamic extremists increased, especially along the border with Niger and Mali.

Sawadogo said foreigners should use extreme caution when travelling in dangerous areas of the country.

Tuesday’s kidnapping occurred on the third anniversary of an attack in a hotel in the centre of the capital Ouagadougou that killed dozens, shocking a country that until then had largely been spared the violence that has plagued its neighbours.

On that same day, militants kidnapped an Australian doctor and his wife, both in their 80s. The doctor’s wife was later freed.

The attacks were claimed by Al Qaeda in the Islamic Maghreb.

With files from Alexander Quon