Older people, ultra-conservatives shared the most Facebook fakery in 2016

By Seth Borenstein The Associated Press

People over 65 and ultra conservatives shared about seven times more fake information masquerading as news on the social media site than younger adults, moderates and super liberals during the 2016 election season, a new study finds.

The first major study to look at who is sharing links from debunked sites finds that not many people are doing it. On average only 8.5 percent of those studied — about 1 person out of 12 — shared false information during the 2016 campaign, according to the study in Wednesday’s journal Science Advances . But those doing it tend to be older and more conservative.

“For something to be viral you’ve got to know who shares it,” said study co-author Jonathan Nagler, a politics professor and co-director of the Social Media and Political Participation Lab at New York University. “Wow, old people are much more likely than young people to do this.”

Facebook and other social media companies were caught off guard in 2016 when Russian agents exploited their platforms to meddle with the U.S. presidential election by spreading fake news, impersonating Americans and running targeted advertisements to try to sway votes. Since then, the companies have thrown millions of dollars and thousands of people into fighting false information.

Researchers at Princeton University and NYU in 2016 interviewed 2,711 people who used Facebook. Of those, nearly half agreed to share all their postings with the professors.

The researchers used three different lists of false information sites — one compiled by BuzzFeed and two others from academic research teams — and counted how often people shared from those sites. Then to double check, they looked at 897 specific articles that had been found false by fact checkers and saw how often those were spread.

All those lists showed similar trends.

When other demographic factors and overall posting tendencies are factored in, the average person older than 65 shared seven times more false information than those between 18 and 29. The seniors shared more than twice as many fake stories as people between 45 and 64 and more than three times that of people in the 30- to 44-year-old range, said lead study author Andrew Guess, a politics professor at Princeton.

The simplest theory for why older people share more false information is a lack of “digital literacy,” said study co-author Joshua Tucker, also co-director of the NYU social media political lab. Senior citizens may not tell truth from lies on social networks as easily as others, the researchers said. 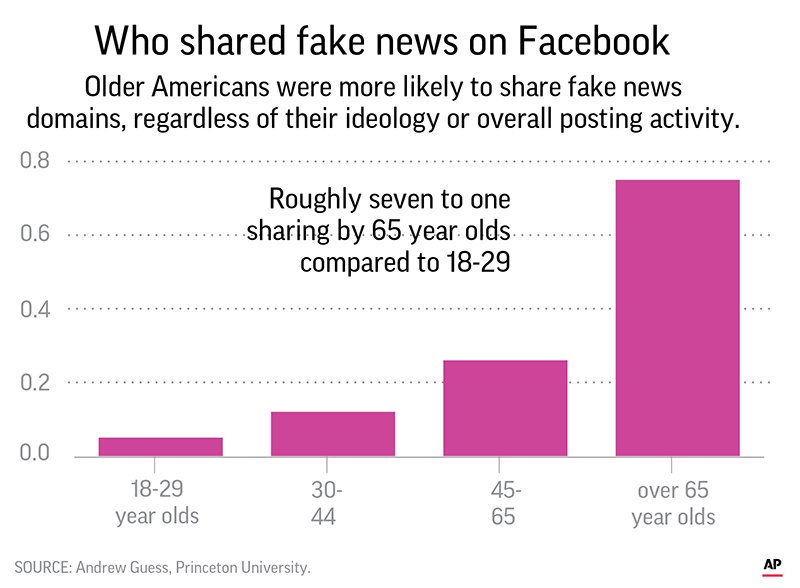 Harvard public policy and communication professor Matthew Baum, who was not part of the study but praised it, said he thinks sharing false information is “less about beliefs in the facts of a story than about signaling one’s partisan identity.” That’s why efforts to correct fakery don’t really change attitudes and one reason why few people share false information, he said.

Nagler said he was not surprised that conservatives in 2016 shared more fake information, but he and his colleagues said that does not necessarily mean that conservatives are by nature more gullible when it comes to false stories. It could simply reflect that there was much more pro-Trump and anti-Clinton false information in circulation in 2016 that it drove the numbers for sharing, they said.

However, Baum said in an email that conservatives post more false information because they tend to be more extreme, with less ideological variation than their liberal counterparts and they take their lead from President Trump, who “advocates, supports, shares and produces fake news/misinformation on a regular basis.”

WATCH: Facebook unveils its ‘war room’ — an attempt to stop election meddling ahead of midterms

After much criticism, Facebook made changes to fight false information, including de-emphasizing proven false stories in people’s feeds so others are less likely to see them. It seems to be working, Guess said. Facebook officials declined to comment.

“I think if we were to run this study again, we might not get the same results,” Guess said.

MIT’s Deb Roy, a former Twitter chief media scientist, said the problem is that the American news diet is “full of balkanized narratives” with people seeking information that they agree with and calling true news that they don’t agree with fake.