“The president’s enemies don’t want him to succeed,” a voice warns darkly.

Who are U. S. President Donald Trump’s enemies? An online video published this week by his campaign (still running as a propaganda operation, most of a year after the 2016 election) knows who they are, and wants you to know, too.

“Democrats obstructing, the media attacking our president, career politicians standing in the way of success.”

It’s one of a growing number of campaign-style videos produced since late July by Trump’s 2020 re-election campaign organization, in what seems to be a response to a series of internal crises in the administration and falling poll numbers.

The videos, produced from Trump Tower in New York are a brisk, upbeat look at the administration, as seen by itself, set to a swelling soundtrack.

They stress defence — “America is being tough and decisive, thanks to President Trump,” video #2 asserted — and the economy.

In video #2, Lara Trump credited rising numbers on the Dow to the administration. 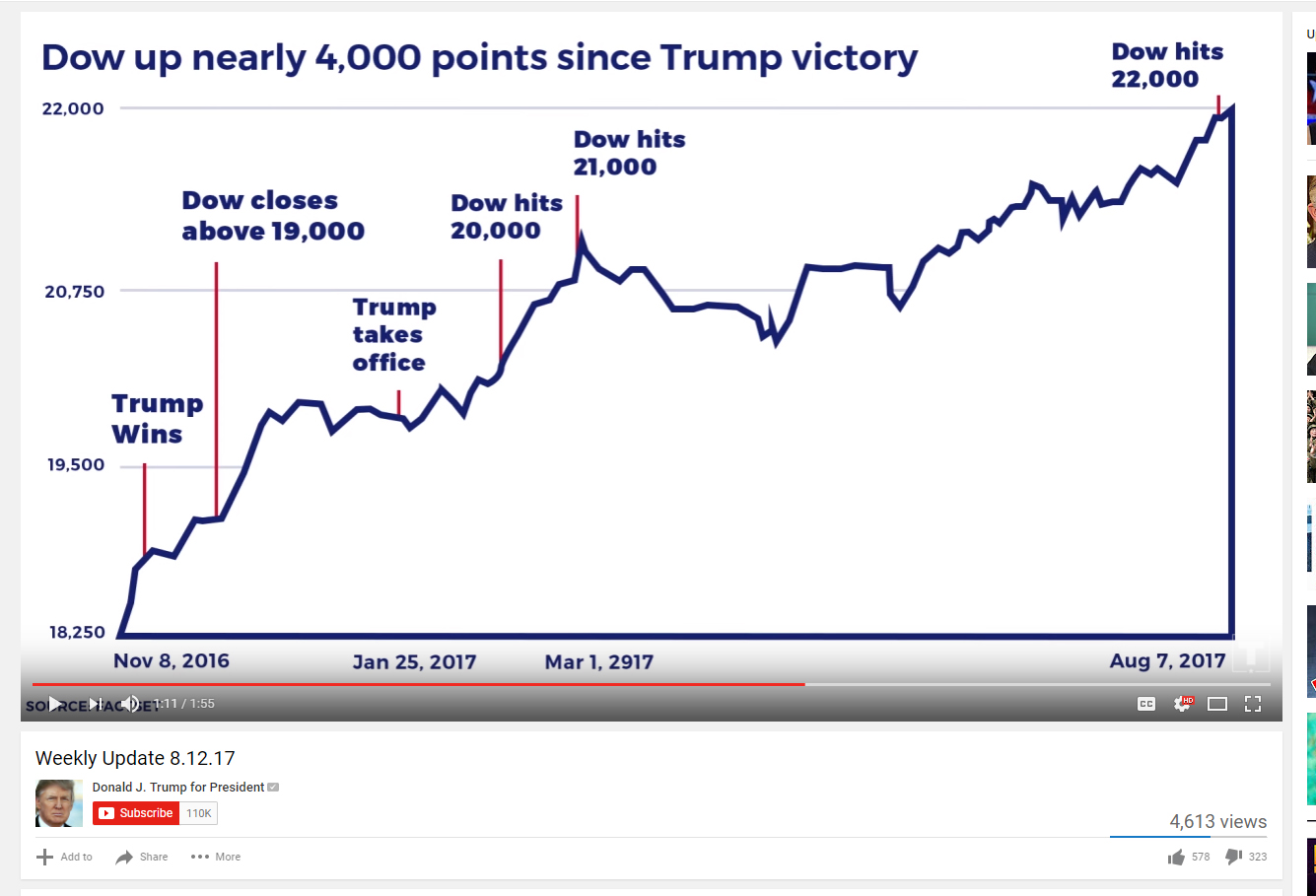 However, the graph is misleadingly cropped. The Dow has been rising more or less continuously since the spring of 2009. While it has risen in the first six or seven months of Trump’s presidency, that trend continued through most of Barack Obama’s first term and all of his second: 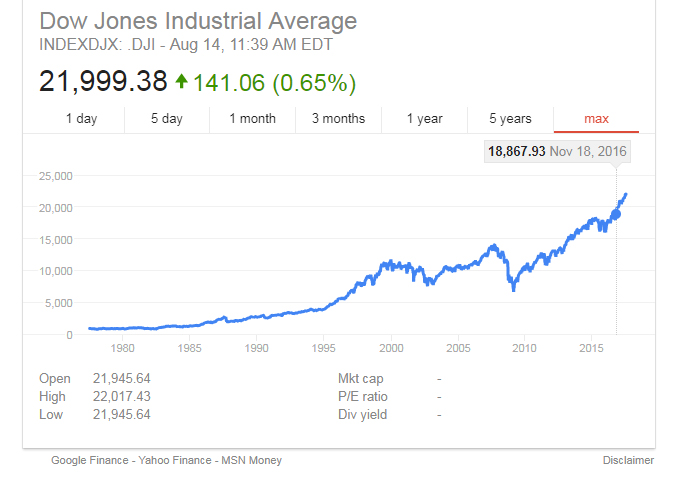 The platforms for Trump’s video campaigns are the Youtube and Facebook pages for his 2016 campaign, now repurposed for his 2020 re-election campaign, and more immediately for what can only be called an ongoing campaign – since the next U.S. presidential election is over 1,100 days from now.

The Facebook account is much busier, with as many as five videos posted a day. Some are very short, like this 11-second clip from last week.

Typically, Trump’s Facebook videos get over a million views; a July 4 video for Independence Day had over four million views and a video on June 27 about CNN’s retraction of a report about Russia got 3.7 million.

There’s often not that much to them — the CNN/Russia video consists only of screenshots of Trump’s tweets and short video clips of his public appearances, as many of them do.

The YouTube page for Trump’s presidential campaign was cleared of its 2016 campaign videos at some point last spring and repurposed for ongoing propaganda. It’s much less successful in terms of traffic than the Facebook page, except for ‘Let President Trump Do His Job,’ the video embedded above, which is trending on YouTube and on Monday had over 644,000 views.

(It has more than three times as many dislikes as likes, however, so it would seem that not all the attention is favourable,)

The campaign videos are often referred to as ‘Trump TV,’ though the term seems not to have been used by the campaign itself since before last November’s election.

Outside Trump’s base, the videos have been greeted with a combination of derision and unease.

Michael McFaul, former U.S. ambassador to Russia, pointed out the similarity to state broadcasters in authoritarian countries, devoted to praising the leader’s real or imagined accomplishments and denouncing his enemies.

Wow. Feels eerily like so many state-owned channels I've watched in other countries https://t.co/dqsLEfuLj8

Last week, Seth Myers called the videos ” … state news crossed with a school announcement: ‘It’s pizza day in the cafeteria, but you won’t hear about that from the failing New York Times.'”

But PR Week sees it as standing in a long tradition, going back to Franklin Roosevelt, of politicians trying to bypass a media filter and talk to their supporters directly.

” … The challenge for Trump TV is building any kind of credibility beyond his base, and the tactic of cherry-picking the news isn’t likely to win any new followers,” the magazine observes.

West Wing Week, the Obama administration’s YouTube channel, churned out a constant stream of videos for six years and ended up with over 334 million views in total. Much of that content could also have been called propaganda, though of a more optimistic, easygoing kind (and with higher production values).

READ MORE: Guam tells citizens what to do in event of nuclear attack