By The Staff CKNW

It’s a warning from the BC Liberals: “They’re going to have to find the money somewhere. Our plan is one that means we are reducing costs affordably. It’s a responsible plan, it’s costed, and its not going to mean anyone’s taxes are going to go up because we know we can afford it.”

Leader Christy Clark says not only is the BC NDP plan to get rid of tolls expensive and irresponsible, but her party claims there are hidden costs the NDP is not talking about.

But, how true is it?

The BC Liberals say their plan to cap tolls at $500 a year is responsible.
Story continues below advertisement

It would see government pay the Crown-owned TI Corporation for any tolls above and beyond the cap, which they believe will cost about $30-million a year.

READ MORE: BC Liberals promise to cap tolls on bridges if re-elected, NDP promises to eliminate them

The BC NDP says their plan will cost $190-million a year. That would account for lost tolling revenue on both structures (about $220-million), but also $30-million a year in savings from not having to administer tolls on both crossings.

But are there hidden costs with getting rid of tolls?

Right now, the tolling system on both the Port Mann and Golden Ears’ bridges is managed by TI Corporation. The Crown Corporation not only collects the tolls and manages the Port Mann Bridge, it also now manages the George Massey Tunnel Replacement Project – a crossing also expected to be tolled. 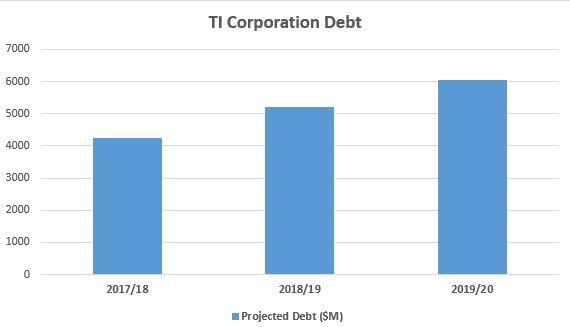 The BC Liberals say getting rid of tolls means taxpayers would be on the hook for that money, not bridge users. That includes costs for financing. Add to that the impact of possibly losing B.C.’s AAA credit rating.

But would that happen?

Michael Yake is a Vice President and Senior Analyst with Moody’s, one of the credit rating agencies that currently has given B.C. a AAA rating with a “stable” outlook.

He says right now, TI Corporation’s debt and the risk associated with it are excluded from its analysis of the province’s outlook.

“We do see that the revenues will be sufficient down the road to pay for the debt service. For the first few years that the bridges are up and running, we do recognize that they may need some support. We take that into consideration. We recognize that the province then has a little bit less flexibility on expenses because it does need to support a crown corporation. But the medium-term, long-term view of the credit is that these will become self-supporting and they won’t require that operational funding from the government.” 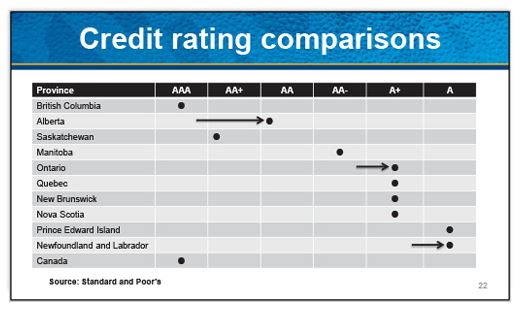 So, what happens if the tolls are eliminated? Will that change?

“If our assumptions were to change and we were to see that it won’t be self-supporting in the future, if the revenues aren’t there or the revenues are removed completely, and then it does fall down to the government to support that debt on an ongoing, on a permanent basis, then we would have to bring that debt back onto the province’s debt metrics that we currently have.”

And would that change the outlook?

“If we had to add in $4.2-billion that is currently not included in our net debt, that would probably be equal to about a 10 per cent increase in our calculation for net debt, so that would increase our debt burden by about 10 per cent as well. So, at that point, we would get a little bit concerned about the debt burden the province is posting.”

Absorbing TI Corp’s currently toll-serviced debt would increase the amount of taxpayer-supported debt (that is, debt not associated with a revenue generating project) to just under $47.4-billion dollars.

That matters, because it affects the province’s taxpayer-supported debt to revenue ratio, a key metric ratings agencies look at.

It currently sits at 87.6 per cent, but absorbing TI Corp’s debt would raise it to 95.9 per cent – above the 95 per cent “warning zone” that could trigger a second look.

Even with the NDP’s projected new revenue sources, the ratio rises above 96 per cent next year.

That increase in debt also doesn’t take into account the additional $7-billion in capital spending the BC NDP wants to bring in.

However, Yake adds that it wasn’t long ago that the province’s debt situation had Moody’s on watch.

In 2013, while Moody’s maintained B.C.’s AAA credit rating, its outlook was negative. That was under a BC Liberal government.

So, is it a concern? Yes, but it’s also a risk the BC Liberals have been willing to take themselves.

Putting the costs of taking on the TI corporation debt aside, are there other costs associated with getting rid of tolls?

“I think the far more serious problem here for both parties’ platforms is, how are you going to pay for future bridges? Future infrastructure?”

Gordon Price, Fellow with the SFU Centre for Dialogue, says the battle of the tolling plans this election has made it nearly impossible to have a real conversation about mobility pricing, or a more fair user pay model of any sort in the region.

“It was an opportunity, was an opportunity to think about how this could be allocated more fairly across the region. But now, I don’t think that’s a realistic discussion, unless there’s some new form of mobility pricing, and I can’t imagine any government at this point accepting it if they’re going to remove tolls, simply for the reason that people don’t like to pay for use.”

Price both the BC Liberal and BC NDP plans are no good from a regional planning perspective.

“The real cost that we’re going to be paying is the inefficiency of the transportation system, with very little hope for resolution in the short-term. That cost is something we will all pay, regardless of whether we drive or not.”

In other words… don’t expect any new crossings any time soon.

“When you have to pay for infrastructure, in a sense, up front… or have some kind of guaranteed cash flow over time, that’s effectively saying there isn’t going to be any significant new infrastructure as far as roads and bridges. Unless the province is willing to come to the table, basically covering the full cost.”

Losing the opportunity for that infrastructure is something Price says is more difficult to put a dollar figure on.

With files from Simon Little