Mother Nature deals Fort McMurray another blow, this time in the form of flooding

Residents in Fort McMurray are once again dealing with a natural disaster.

Municipal crews and contractors are currently working on both flooding and traffic signals.

The RMWB is experiencing additional localized flooding in the downtown area and roads may be closed as required.

The rain began shortly after midnight and intensified around 7 a.m. Sunday. 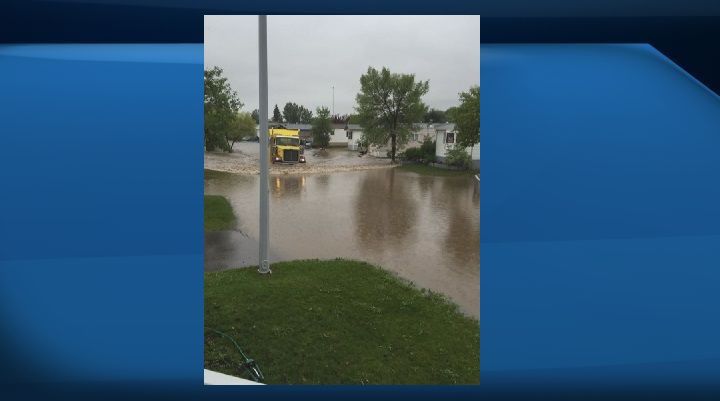 Wayne MacDonald lives in the Timberlea neighbourhood. He drove around the city Sunday morning documenting the flooding and said water levels on the streets ranged from 20 cm to roughly half a metre deep in some locations.

“It seems to be running off pretty well, the ditches are full. There was one spot when I was coming out of the downtown area where the water was gushing up about a half a meter near the highway,” he said.

Over 85mm of rain has fallen in the past six hours.

Photos of the flooding were posted on social media.

Traffic signals and power outages were reported, but residents that spoke to Global News said it’s been restored in most areas.

UPDATE: Due the recent rainfall, the Municipality has activated the Regional Emergency Operations Centre.

No details as to how much water had pooled was given.

Emergency care is now being provided in the ambulatory care department while the water is cleaned up. A dozen patients were moved from the emergency department as of 11:30 a.m. on Sunday.

No other patient care units have been affected by the heavy rain. There is no word on when the emergency department will re-open.

Tany Yao, MLA for Fort McMurray-Wood Buffalo, said the rain is “terrible luck” for the area.

“We will get back to a state of normality, sooner rather than later. This is a step back but compared to the fire, nothing seems to faze anybody after that,” he said.

Yao, whose house is not affected by the flooding, said it seems like Mother Nature is trying to keep residents humble.

“People I’ve talked to, they aren’t fazed by it. I mean, things just happen. It is what it is,” he said.

More rain is on the way.

WATCH BELOW:
Nearly 3 months after a devastating wildfire, resident in Fort McMurray are once again dealing with a natural disaster. As Julia Wong reports, this time it’s flooding.

Environment Canada expects the region to receive up to 120 mm by Monday.

“Make sure you’re ready for potentially another round of heavy rain. Unfortunately with this system it’s very variable where the rainfall amounts are going to be, so Fort McMurray could see another 40-60mm of rain or they could see only another 10-20. It’s just the nature of the system,” Brad Power, an Environment Canada meteorologist, said.

Environment Canada issued a rainfall warning for the region Sunday morning describing ‘a low pressure system developing near Fort McMurray that will bring a period of heavy rain to parts of northeast Alberta’.

R.M. of Wood Buffalo near Fort MacKay and Wallace Creek

R.M. of Wood Buffalo near Fort McMurray and Anzac

R.M. of Wood Buffalo near Gipsy Lake and Whitemud Falls

R.M. of Wood Buffalo near Janvier South and Conklin

The forecast as of Sunday afternoon shows the heaviest rain falling near Fort McMurray, Wabasca, and Slave Lake.