Canadian adventurer George Kourounis wanted to see firsthand the toll such a disaster took on a town that once housed the workers of the Chernobyl nuclear power plant.

The town of Pripyat, about 15 km northwest of Chernobyl, was home to roughly 45,000 people — all of whom were forced to abandon their homes within 24 hours of the explosion. By mid-May, more than 116,000 people living within a 30-km radius were evacuated. Within the following months, about 1,000 people returned to live in the radiation zone, known as the exclusion zone.

Kourounis visited Pripyat, a place that he described as being surreal.

“Eerie would be an understatement,” he said. “Apocalyptic, would be a better word. It does feel like you’re in a zombie movie. And you’re expecting some pack of flesh-eating undead to come scurrying around the corner.”

To get into the exclusion zone, Kourounis had to go through three different checkpoints. He spent three days there.

Among the places he visited, was an abandoned travelling amusement park. The park was set to open a few days after the explosion.

“It’s a very surreal experience to go there and there’s this strange, green moss that’s growing over everything, that seems to be thriving … and this rust peeling off of everything and the paint’s coming off,” Kourounis said.

“The creepiest was the hospital,” he said. “You go in and there’s been looting, there are medical records strewn across the floor. There are examination rooms; jars of medicine and different medical instruments strewn around. You go to the maternity ward and there are rusting cribs and radioactive paint peeling off the walls. It’s just so, so very surreal.”

The Chernobyl nuclear disaster started during a systems test of Reactor 4. A sudden power surge occurred, and when the workers attempted to shut it down, it resulted in an even bigger energy spike. A reactor vessel ruptured and a series of steam explosions rocked the plant. Another part of the reactor ignited, sending a highly radioactive cloud into the atmosphere.

At the time of the explosion, Ukraine was part of the Soviet Union. Kourounis said the communist and Soviet influences are still evident all around town. 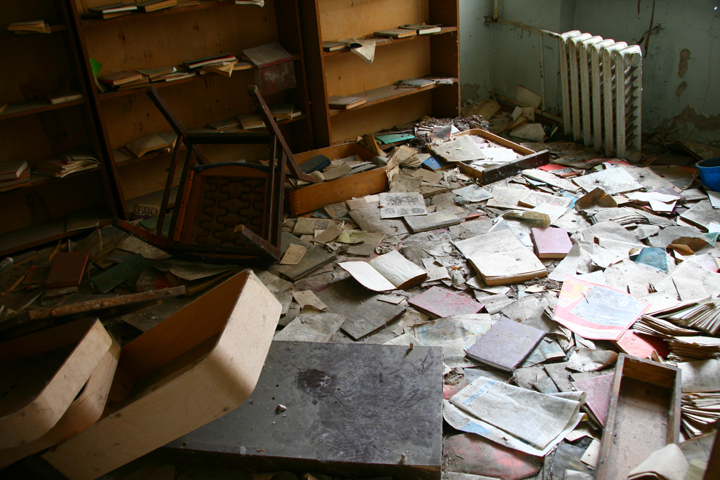 Books and medical records are scattered across a hospital floor.

There are no cars in Pripyat; massive trenches were dug and all vehicles were buried in order to prevent any radioactive cars from leaving the area. About 25 km south of Chernobyl lies a massive graveyard of airplanes and military equipment (it used to be visible on Google Maps, but has since been redacted).

Kourounis wasn’t too worried about getting high radiation doses; as a seasoned adventurer and storm chaser, he did his research. And today, there are even tours offered in nearby Kyiv to the deserted town. No special clothing is needed, however, you are checked thoroughly upon leaving the zone. In a particularly contaminated area, Kourounis said they were only allowed to stay for 15 minutes. And the guide was serious: as soon as they arrived, he started his stopwatch.

Kourounis  would go back to visit Pripyat again. He appreciates the beauty of a town left to its own devices, but he also sees it as evidence of humankind’s folly in underestimating the power of nature.

“As a photographer, I think it’s fantastic. As a testament to man’s arrogance, I find it fascinating.”