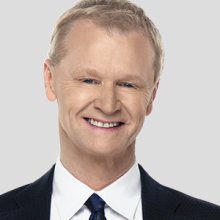 Squire Barnes’ entire working life has been spent in sports media. His career was launched at the now defunct CKO Radio in Vancouver. He was there for a five-year stretch in the 80s. From there, he moved on to CKWX Radio as the producer of the Tony Gallagher sports phone-in program. After that, he had a similar position at CHRX in Vancouver. Along the way, he has written numerous columns and articles for print publications.

Television beckoned in the 90s and Squire took over weekend sports at CBC Vancouver. When the Saturday Morning News was launched, Squire was a welcome addition to the news team.

As part of Global News Hour at 6, he continues to be one of the station’s most popular personalities, which can be attributed to his knowledge of sports and his slightly twisted sense of humour.

Squire grew up in Burnaby, making him another B.C.-born staff member.