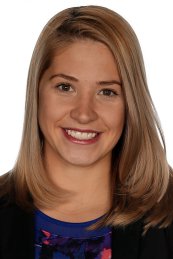 Krista’s journalism career started at the age of 8, when she published a “local” newspaper for her family members, and delivered it door to door (or bedroom door).

Years later she graduated from the University of Guelph-Humber, earning both an Honours Degree in Media Studies and a Diploma in Journalism.

Krista began her professional career at 680 News Radio in Toronto and then switched to television working as a videographer at TV Cogeco. There she spent years reporting on the Halton Region and her hometown of Burlington, ON.

She has interviewed countless mentionable characters including Justin Trudeau, Kathleen Wynne, Kent Austin, Tie Domi, and Santa Clause. She reported on the Burlington flood of Aug. 14 and the arrest of Marco Muzzo.

Krista joined the Global Regina team in March of 2016 and is making herself at home in Regina with her better half Lucas and their Boxer dog Molson.

01:41
Global News at 6 Regina
Countdown to Christmas: How to shop stress-free this holiday season

01:31
Global News at 6 Regina
Riders Drumline teach students the beat of the drum

Residents in Regina’s south end are losing sleep over construction in the Wascana Parkway area. The overpass is closed nightly from 7 p.m. to 6 a.m. for bridge replacement work and is expected to take three weeks.

Crime
July 4, 2017 11:32 am
Motorcyclist in serious condition after collision in North Central

Police were called to the intersection of 7th Ave and Angus St. just after 8:30 a.m. on Tuesday morning for a collision between a truck and motorcycle. Regina police say the driver of the motorcycle was rushed to hospital with serious injuries.

‘Some of our payroll and our inventory is being done on recipe cards’: City of Moose Jaw finally switching to digital age

Moose Jaw City Hall is what some would call old school. Documents such as payroll, work orders and inventory are being completed on hand written recipe cards, and the lack of digital assistance is costing both time and money.

Crime
May 12, 2017 10:07 am
Dale Stonechild to be sentenced for manslaughter conviction

He was convicted after the body of Victor Richard McNab was found inside a home on the 1400 Block of Rae Street in January of 2013.

“All of a sudden the guy at the x-ray machine is like ‘come over here, come over here.’ Next thing you know, there were seven or eight people standing around the machine and I’m like, ‘OK, what’s going on’,” Britton said.

Newcomers aren’t the only ones adjusting to winter weather

Between midnight and 10 a.m. Tuesday, Regina police said there were 23 collisions already reported to them. Winter weather isn’t easy to navigate, and it’s even more difficult if you’ve never even seen snow before. Isha Bhanot has only been in Canada for six months and is learning to adapt to Saskatchewan’s snowy conditions.

‘Nobody wants to work in the night time’: Regina cabbies call for more safety bylaws

Khushdeep would like to see the City of Regina pass a bylaw mandating all taxicabs to implement a partition between the driver and the customer. He said that could have saved his friend from the attack.

How to avoid holiday debt after Black Friday

She fears that consumers who can’t pay for Black Friday purchases within a few days or months won’t be getting a good deal. “Sometimes what people don’t consider is that, if they do charge it to their credit card and are unable to pay it as soon as they charge it, the interest that they’re charged over the next few months until the balance is paid can outdo the savings that they actually thought they were getting.”

A provincial report card on child and family poverty shows a startling number of people go without in Saskatchewan.

They will cross examine a total of 45-thousand E. coli gene combinations over five years. At least one of those combinations will be the strain that is strong enough to combat the antibiotic resistant strain.

Neighbours in the Glencairn neighbourhood of Regina are alarmed and angry after finding spray paint tagging their property that includes racial and offensive language.

Regina police are asking for the public’s assistance in locating two young boys. Twelve-year-old Henry Steinhauer and ten-year-old Kojack Adams of Pilot Butte were last seen Friday evening at 7:45 in the 2000-block of Prince of Wales Drive in the city’s east end. Police describe Steinhauer as aboriginal, 5’7″, 160 pounds, with short black hair…

The ceremony at the Brandt Centre included symbolic poppies falling from the ceiling, wreath-laying and the Last Post played in memory of Canadian soldiers.

Two people are in custody after the SWAT team conducted a search warrant in Regent Park on Sunday.

In a formal complaint filed with the Saskatchewan Professional Teachers Regulatory board (SPTRB), Martina Cain is alleged to be guilty of professional misconduct in incidences that took place between January 1986 and June 1989.

A spokesperson for the health ministry said it would not be known until later Saturday whether any of passengers ar… twitter.com/i/web/status/1…

"It is overblown and unfounded claims from unnamed sources that are presented as facts and it is disappointing when… twitter.com/i/web/status/1…

Good teachers are a blessing, and Adele knows it. trib.al/04TtoDs