It’ll be a whirlwind weekend for a Winnipeg couple, who plan to celebrate their wedding Saturday night, before hopping onto an Ontario-bound flight hours later to watch their beloved Blue Bombers compete for the Grey Cup.

Shannon Evans and Ken Hardman say they’re spending their honeymoon in the unlikely destination of Hamilton, Ont., where they’ll watch their team’s attempt at back-to-back championships.

“Normally the Grey Cup is in November,” Evans told 680 CJOB, “but because of COVID, it’s pushed back a little this year, and they chose my weekend.

“I chose this weekend a long time ago, and we just decided because the Grey Cup is on the same weekend, we had to make it work, and we had to find a way to get back there.”

The couple, who saw the Bombers’ drought-ending 2019 championship live and in person, will be catching a 7:20 a.m. flight Sunday morning, but with COVID-19 protocols in place at the airport, they’ll be there closer to 5 a.m.

“I think we probably won’t be getting any sleep, we’re just going to be too excited from the wedding,” Hardman said.

“Weddings usually go to one to two in the morning, we’ll finally get home at around three, have a bite to eat. … I don’t see any sleep that night, for sure.”

The trip itself was a bit of a gamble, as the Bombers weren’t confirmed to be competing for the cup until winning the West Final this past Sunday.

Read more: ‘I never dreamt of this’: Voice of Blue Bombers Bob Irving inducted into Ring of Honour

“There was zero nerves going into the game, but after that first quarter, oh boy does it get interesting,” said Hardman of the Bombers’ 21-17 victory over the Saskatchewan Roughriders.

“We had a lot riding on that game, so I think we were invested just as much as the players were. I’m sure they felt a lot of the same emotions as we did during that game.”

Whatever the outcome of this weekend’s final, the couple — especially Evans — will be hard to miss in the crowd.

“Our whole goal is just to get there, watch the Bombers win, and then celebrate with everyone at the afterparty,” she said.

“I’ll be the one in the wedding dress.” 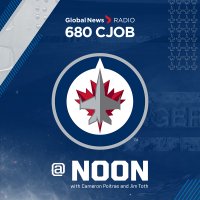