Three people are dead after a Canadian Coast Guard helicopter crashed in Arctic waters during a routine patrol to check ice conditions.

The helicopter had been stationed on the icebreaker Amundsen, which was sailing through M’Clure Strait in the western Arctic as part of a regular program of scientific study.

Those killed have been identified as Marc Thibault, commanding officer of the ship, helicopter pilot Daniel Dube and Klaus Hochheim, a veteran University of Manitoba Arctic scientist.

“We are deeply affected by this tragedy,” said Mario Pelletier, the coast guard’s assistant commissioner. “Our deepest condolences go to the families of our colleagues, who we like to think of as our friends.” 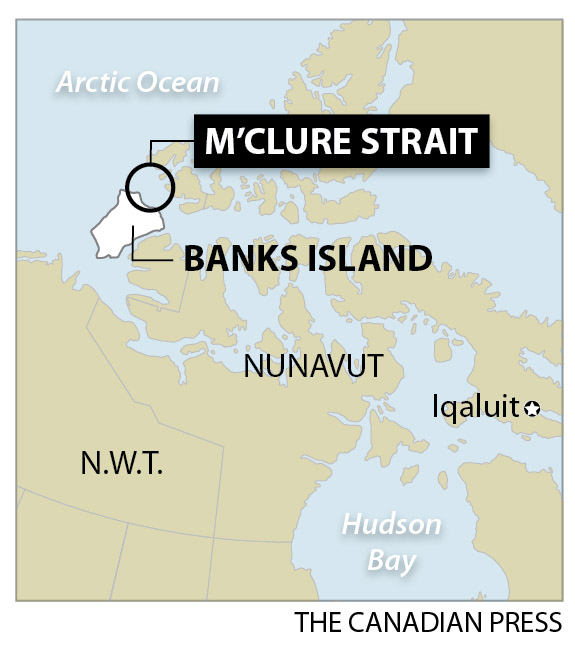 “It was decided that an ice recognition patrol was needed in order to familiarize the commanding officer with the conditions surrounding the ship.

“We lost contact with the helicopter. The ship made its way to the last known position and found three persons in the water.”

Pelletier said weather conditions at the time of the crash Monday were good. The accident occurred during daylight.

All three who died were wearing safety equipment at the time, Pelletier said. He wasn’t able to say how far the helicopter was from the ship at the time of the crash or speculate as to what happened.

The Transportation Safety Board is investigating.

The helicopter was a Messerschmitt 105, capable of carrying a pilot and four passengers. Its maximum range is about 400 kilometres when fully loaded.

The Amundsen is a dual-purpose vessel, assigned to ice-breaking in the winter and to supporting scientific research in the summer.

The ship was steaming back Tuesday to Resolute, where Canada maintains a logistics centre for scientific research.

“We’re going to have some support offered there,” said Pelletier. “Our priority right now is to make sure they receive the proper support.”

Prime Minister Stephen Harper, in a statement of condolence, said the crash underscores the risk assumed by those who work in the Arctic.

“It is a grim reminder of the very real dangers faced on a regular basis by those brave individuals who conduct research and patrol our Arctic – one of the harshest and most challenging climates in the world – to better understand and protect Canada’s North,” he said.

“The courage and dedication of these three brave individuals will be honoured and remembered.”

Tim Papakyriakou, of the Centre for Earth Observation Science where Hochheim had worked for 12 years, said the department was “devastated.”

“I’ve known him for years,” Papakyriakou said. “(He was) a very pleasant, helpful individual – someone where, if you needed something, you would just ask and he would be there … just a pillar of support in all respects.”

Hochheim wasn’t deterred by the extreme northern climate or the rigours of working in the Arctic, he said. His research on sea ice was crucial to understanding climate change in the North, he added.

“The Arctic has been changing more than any other region on the planet, and really the only reason we know the extent to which it’s been changing is using remote sensing,” Papakyriakou said. “That was right up Klaus’s alley. His work was front and centre in that particular arena.

“He’s going to be sorely missed.”

Martin Fortier, executive director of the research consortium ArcticNet which manages the Amundsen’s scientific program, worked with all three victims many times. Everyone is in shock, he said.

“Those three people were just great people,” Fortier said, his voice cracking. “(My) favourite captain, favourite pilot and Klaus was a great person too.”

Although working in the Arctic is dangerous, Fortier said such tragedies are rare.

“It is the Arctic. It’s a risky environment, but the priority is safety,” he said.

The ship carrying the bodies of the three victims will be met by Mounties in Resolute and support workers are being sent to meet those left on board, he said. They are considering cancelling the mission but no decisions have been made, Fortier said.

In 2012, a First Air 737 airplane crashed at the Resolute airport, killing 12 passengers and crew, including well-known Arctic science advocate Martin Bergmann. The Transportation Safety Board is still investigating that disaster.