When it comes to Twitter, @PMHarper is lagging behind

By Mike Blanchfield The Canadian Press 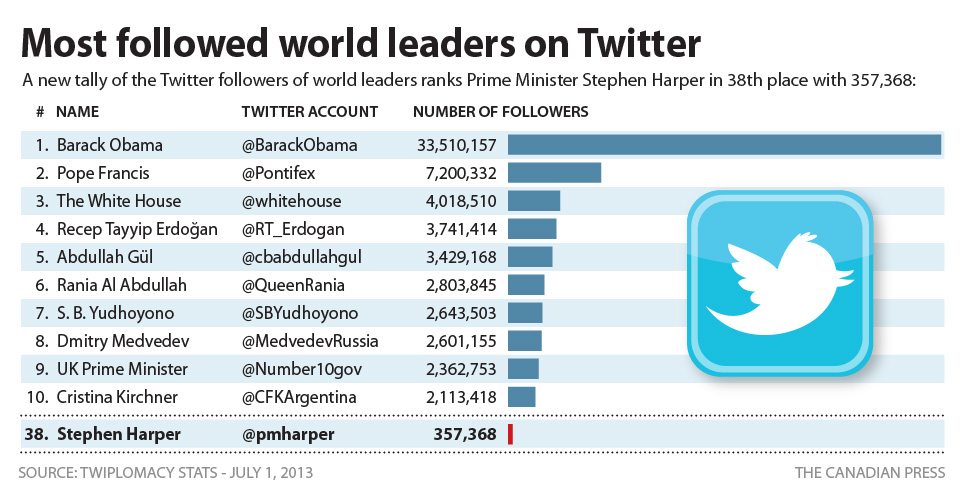 The so-called Twiplomacy study was conducted by the New York-based firm Burson-Marsteller, which bills itself as an “evidence-based” communications firm.

“Prime Minister Harper was the fourth world leader to sign up to Twitter in July 2007 in the footsteps of (at)BarackObama, however he only started to tweet in September 2008 asking his followers to ‘check out the new Conservative Party website’,” the report says.

“Although the tweets are written in first person he rarely writes the tweets himself.”

It also says Harper doesn’t engage frequently with others on Twitter. That would appear to include most other world leaders, including the U.S. president. Harper doesn’t follow Obama’s feed.

“Prime Minister Harper is not very conversational, only 2% of his tweets are (at)replies and 6% retweets,” the survey said.

“Surprisingly (at)PMHarper only follows Russian Prime Minister (at)MedvedevRussia and Uganda’s PM (at)AmamaMbabazi but does not follow his peer at the White House.”

The survey says Harper tweets his “vision” of Canada in an “informal way” and sometimes lets followers “enter his personal life.”

That latter observation appears to reference the January day when Harper used his account to chronicle “a day in the life” as prime minister.

An hour before he unveiled his new cabinet, Harper’s account began tweeting individual new portfolios in what was viewed by some pundits as a social media striptease.

Harper’s office has not been willing to indicate who actually does his tweeting, saying the prime minister only “occasionally” posts himself.

“His Twitter account is also empathetic when needed, e.g. on the occurrence of natural disasters,” said the Twiplomacy study.

“During the election campaign in 2011 he traded 140-character blows in a Twitter exchange with his opponent, Liberal Party leader Michael Ignatieff ((at)M-Ignatieff) who had challenged him to a one-on-one debate.”

The study also examined the use of Twitter by diplomats.

It said Foreign Affairs Minister John Baird was “a firm believer in the benefits of digital diplomacy.”

Baird “personally tweets from his iPhone” in both official languages both “on key foreign politics issues, with Syria crisis playing a major role in his updates, and his institutional agenda, speeches and meetings but without leaving out his passion for the Ottawa Senators hockey team.”