More than eight in 10 Canadians surveyed in a new Ipsos poll said they want to keep the U.S.-Canada border closed till at least the end of 2020.

Hesitation to travel during the coronavirus pandemic is also high among the respondents: 93 per cent of those surveyed in the poll, conducted exclusively for Global News, said it would be too risky to travel to the U.S. this summer.

Travelling south of the border for leisure isn’t even an option at the moment. The countries agreed to extend the ban on non-essential travel between the two until late August.

“We’re going to keep working closely with our American neighbours to keep people safe on both sides of the border,” Prime Minister Justin Trudeau said Thursday. 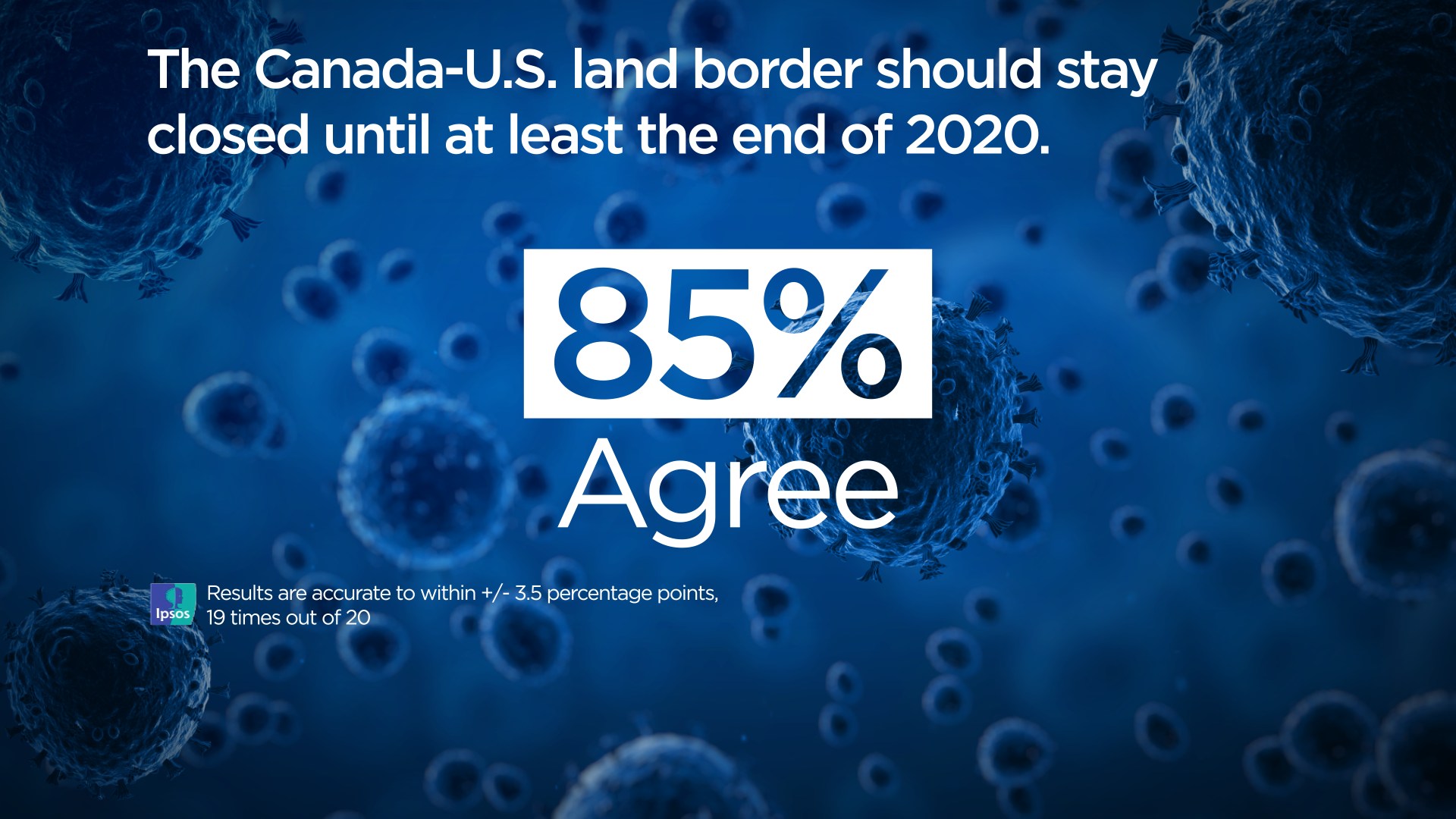 “Close collaboration with our neighbours has allowed us to respond to COVID-19 in a North American approach and slow the travel-related spread of the virus,” acting Homeland Security Secretary Chad Wolf said in a tweet Thursday.

The border closure extension came as states across the U.S. experienced a surge of COVID-19 cases. As of Wednesday, Florida had seen 300,000 confirmed cases — almost three times the total number of cases reported in all of Canada.

The Ipsos poll surveyed 1,000 Canadians July 8 to 10, and found only 21 per cent of respondents felt Canada should reopen its borders as soon as possible to revive travel and tourism.

Nine in 10 respondents agreed the country should continue to require people entering Canada to quarantine for 14 days. There was little disagreement with this policy, with only two per cent indicating they strongly disagree. 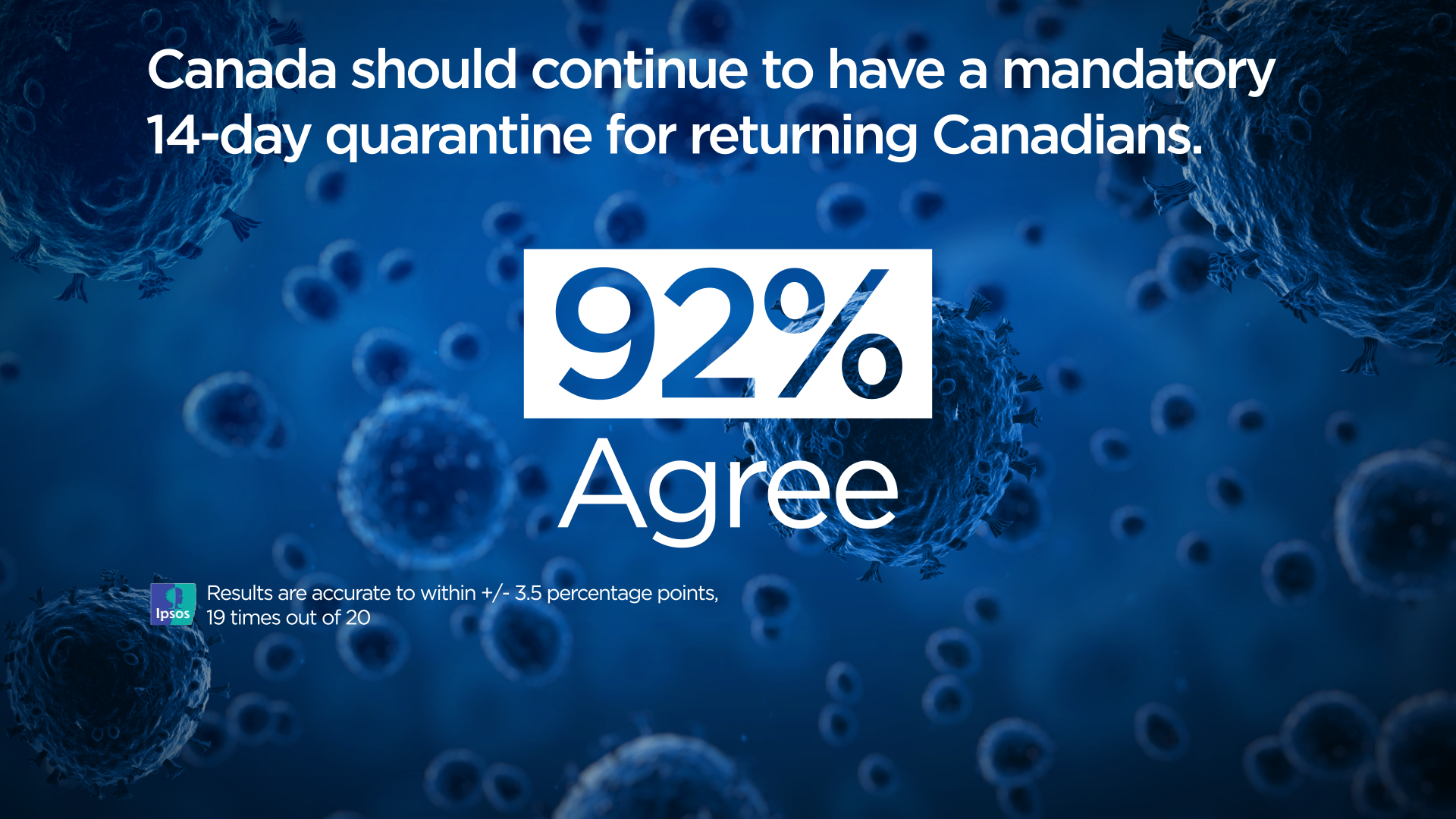 July alone has seen at least 17 international flights and 14 domestic flights flagged by the federal government for potential exposure to the coronavirus.

More than 60 per cent said travelling to another province this summer is too risky, with comfort levels varying by region. For instance, 76 per cent of Atlantic residents in the poll and 51 per cent of Albertans agreed with this statement.

Ipsos Public Affairs CEO Darrell Bricker recently told Global News that he doesn’t find these numbers shocking and that there is a sense across Canada that the country needs to be “very, very cautious,” especially as they watch the coronavirus spike south of the border.

“(Canadians are) looking at what they’re seeing in the United States and saying, ‘whatever we do, we can’t have that in this country,’” he said.

“So that means controlling the borders, but it also means not exposing yourself and not visiting the United States anytime soon.” 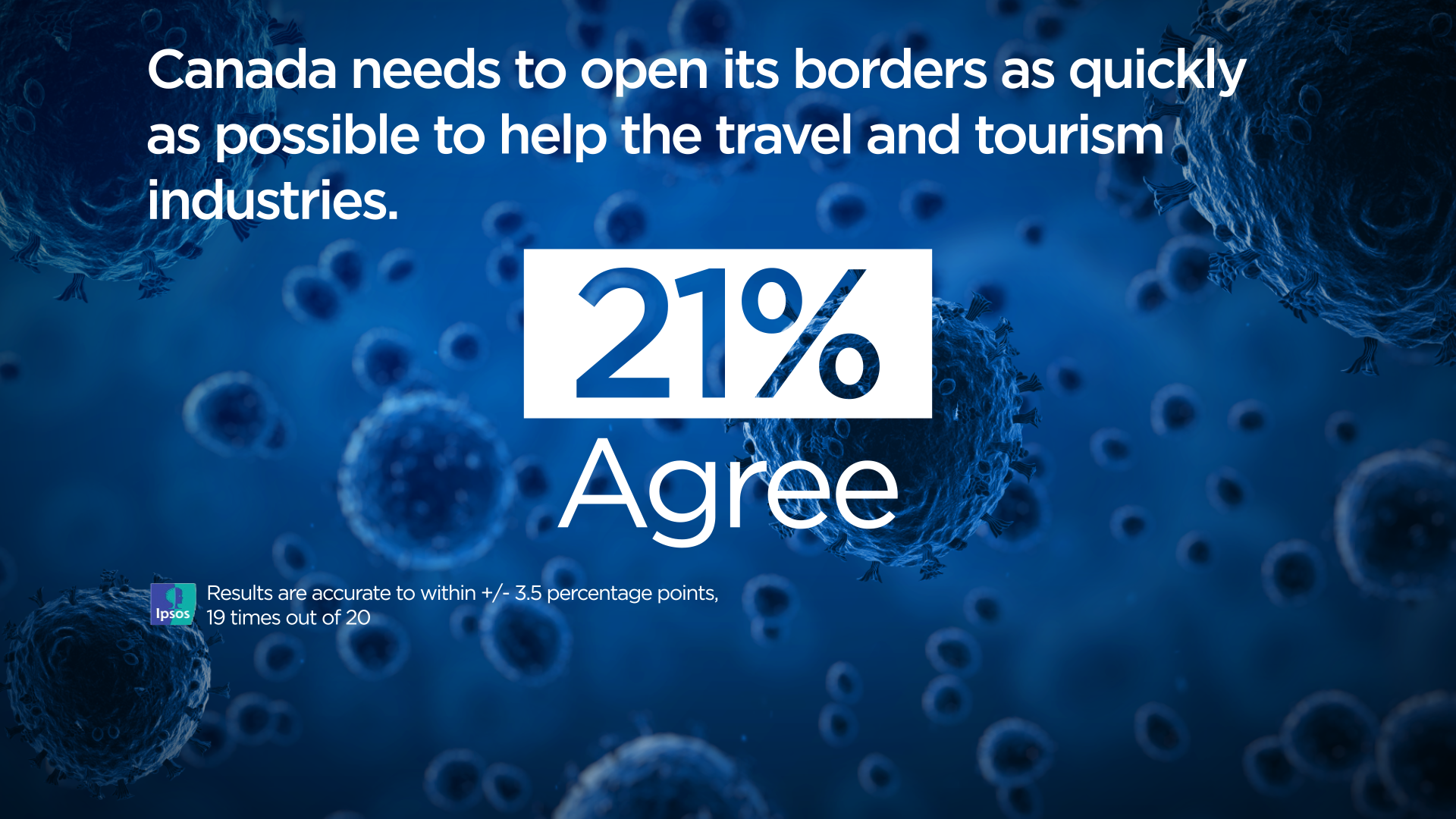 A large majority of respondents (89 per cent) also agreed that it was too risky to travel overseas this summer, with little variation in response across provinces.

A recent story by Global News showed that international travellers arriving at Canadian airports is going up, with around 91,300 people flying into Canada between June 29 and July 12. The numbers are based on statistics released by the Canada Border Services Agency (CBSA).

— With files by The Canadian Press, The Associated Press, and Global News reporters Brian Hill and Hannah Jackson

METHODOLOGY: This Ipsos poll was conducted between July 8 and July 10, 2020. For this survey, a sample of 1,000 Canadians from the Ipsos I-Say panel was interviewed.  Quotas and weighting were employed to ensure that the sample’s composition reflects that of the Canadian population according to census information. The precision of Ipsos online polls is measured using a credibility interval. In this case, the poll is accurate to within ± 3.5 percentage points, 19 times out of 20, of what the results would be had all Canadian adults been polled. The credibility interval will be wider among subsets of the population. All sample surveys and polls may be subject to other sources of error, including, but not limited to coverage error, and measurement error.