Most Canadians feel society is ‘broken’, politicians don’t care about them: Ipsos poll

The majority of Canadians think politicians aren’t concerned with people like them and experts don’t understand them.

They say society is “broken” and the economy is rigged in favour of elites.

That’s according to the findings of a new Ipsos poll, which shows that populist attitudes — as well as nativist (or anti-immigrant) sentiments — have gained new ground in Canada.

The results, released Thursday, provide a suggestion as to what political leaders could be facing from voters as they attempt to woo them in the upcoming federal election.

Darrell Bricker, CEO of Ipsos, said that the general sentiments “create a series of difficulties for all the parties.”

“It’s not like one party is seen as a specific solution to any of this or specifically tapping into this,” he said. “What it is, is that it creates a different context for everybody that’s out there.” 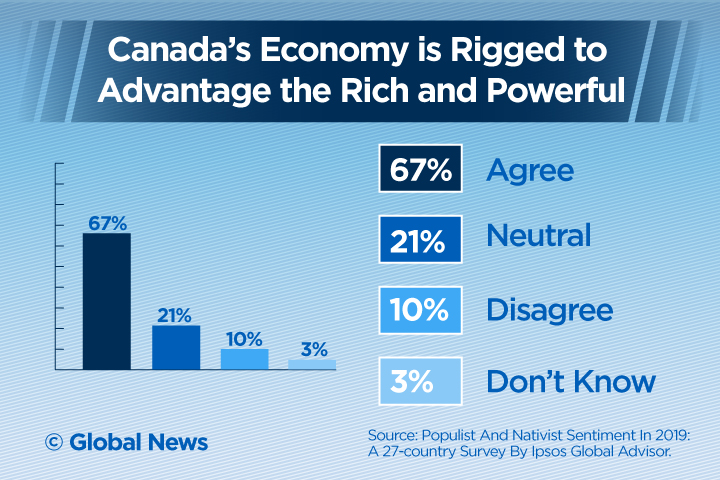 The survey results, provided exclusively to Global News among Canadian outlets, were gathered at the end of March and early April.

They were collected as part of a poll that included 27 countries.

Sixty-one per cent of Canadian respondents agreed traditional political parties don’t care about people like them ⁠— an increase of five points over polling done in 2016, the first year of Prime Minister Justin Trudeau‘s mandate. 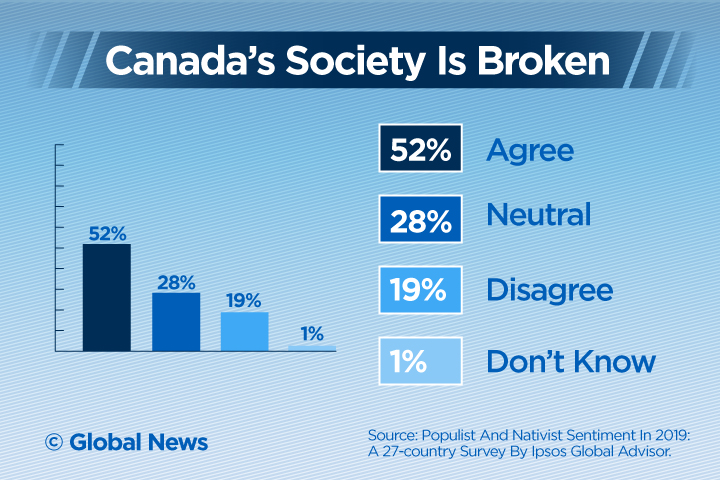 Bricker said that while the trends shown in the report have been building over time, that result in particular could have a connection to a political scandal that has dogged the Trudeau government.

“One wonders if that was specifically related to what happened on SNC-Lavalin,” said Bricker, who suggested future survey results could provide an indication whether the blip was temporary or not.

Two-thirds of respondents believe the economy is rigged to benefit the rich — up eight points since 2016.

The poll also found that 41 per cent of respondents believed immigrants are taking away crucial social services from what the poll called “real” Canadians ⁠— a six-point increase from 2016. (Thirty-four per cent, however, said they disagree). 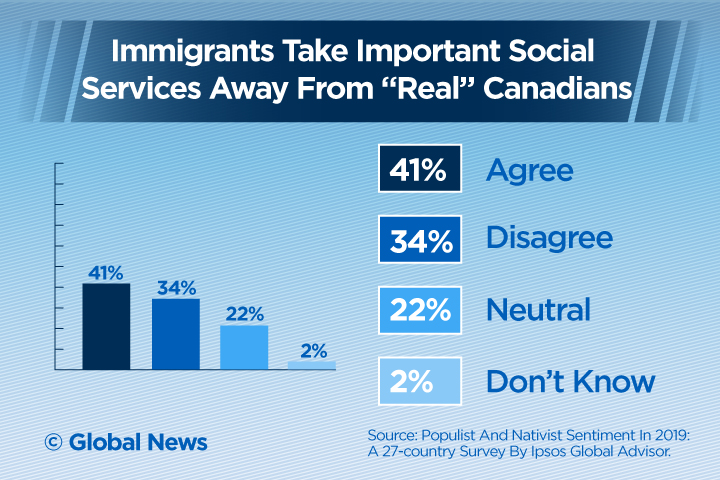 So, what’s fuelling the shift toward populism?

Politics, Bricker said, has become more “tribal” and the distribution of political support has changed in Canada.

“You have a lot of stuff here where it’s the downtown Laurentian elite versus everybody else,” he said.

“If I broke this out and took at look at where these feelings are the strongest, they would be outside of the downtowns of the cities, so that cleavage has been created. Also when you get to Western Canada, the feelings are much stronger,” he said. 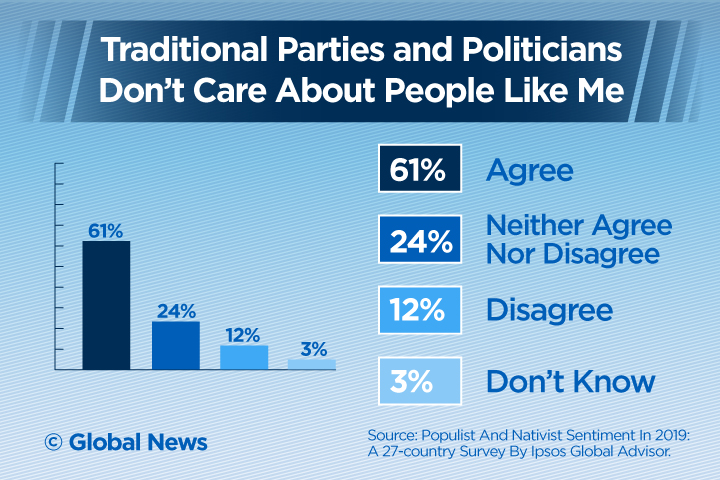 The data is weighted so each country’s sample composition best reflects the demographic profile of its adult population according to the most recent census data, and to give each country an equal weight in the total “global” sample.

The precision of online surveys conducted on Global Advisor is measured using a Bayesian Credibility Interval. Here, the poll has a credibility interval of +/-3.5 percentage points for countries where the sample is 1,000.