As the FBI probes deaths of American tourists in the Dominican Republic, Global News has learned 28 Canadians died there so far in 2019.

Data obtained by Global News from Global Affairs shows an average of 39 Canadians died each year in the Dominican Republic over the past decade. More recently, from 2015 to 2018, that average is higher: 47 death cases opened each year. 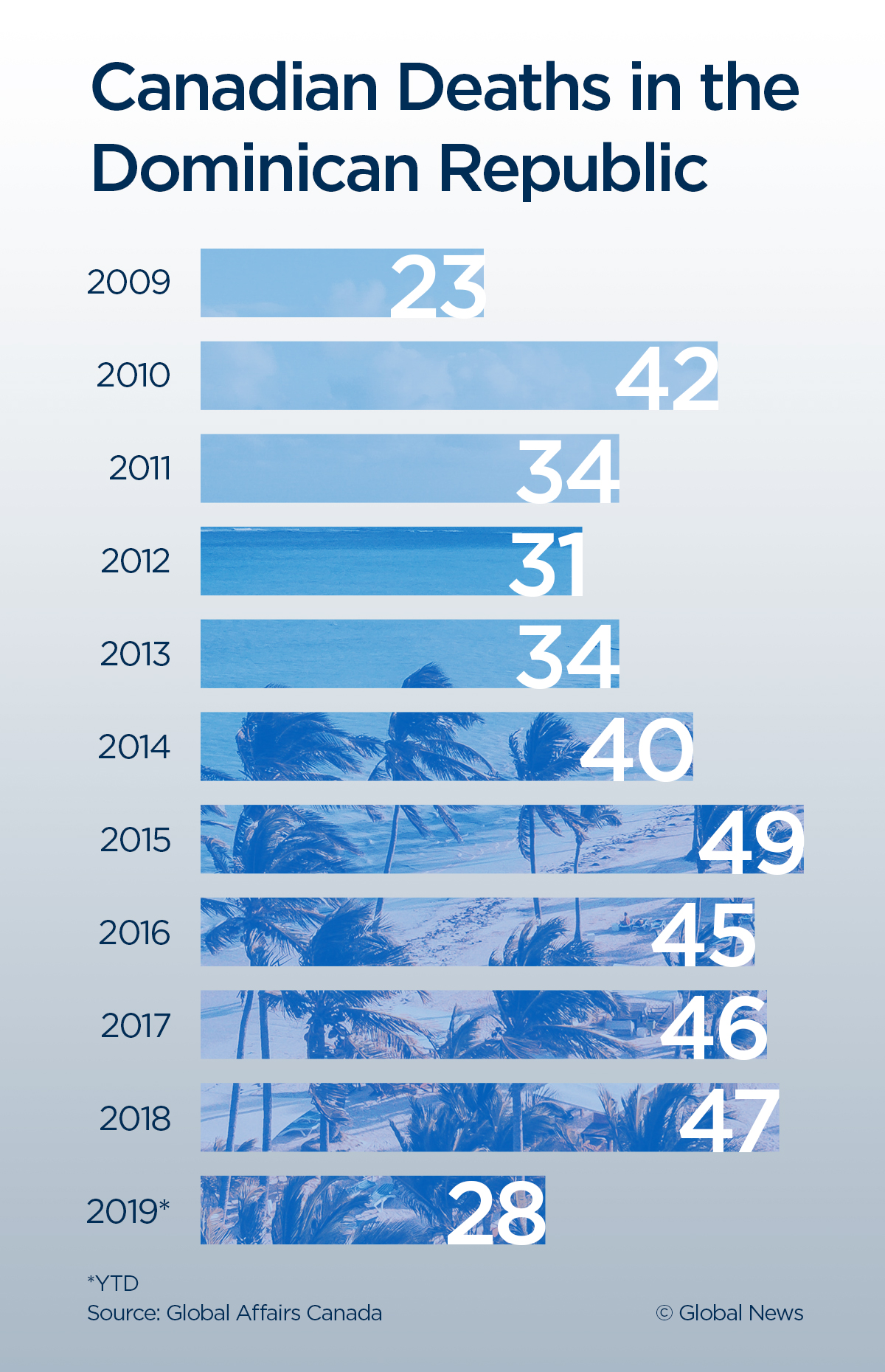 In the United States, there is extensive media coverage and concern over at least eight tourist deaths, with families calling for more answers in what seem to be mysterious circumstances. In some cases, tourists fell ill and died after drinking from resort minibars.

Last month, the FBI went to the Dominican Republic to assist local officials with testing. Neither American nor Dominican officials have said the deaths are related in any way, while the Dominican tourism minister has said they are isolated and not mysterious as feared.

But amid heightened tensions, Global Affairs is refusing to confirm whether it is probing specific cases of Canadian deaths. The agency also would not provide specifics or a breakdown about the causes of the Canadian deaths but told Global News 82 per cent are from natural causes.

“When data set is very small in a given category, one would reasonably be able to deduce personal information, which would be a breach of provisions in the Privacy Act,” spokesperson Sylvain Leclerc wrote Global News in an email by way of an explanation.

The department warns Canadians to exercise a high degree of caution when visiting the country but says nothing about potentially mysterious deaths. When Global News asked if there is any concern about the Canadian death rate, a spokesperson would only say there isn’t “necessarily” an increase in death numbers for 2019. 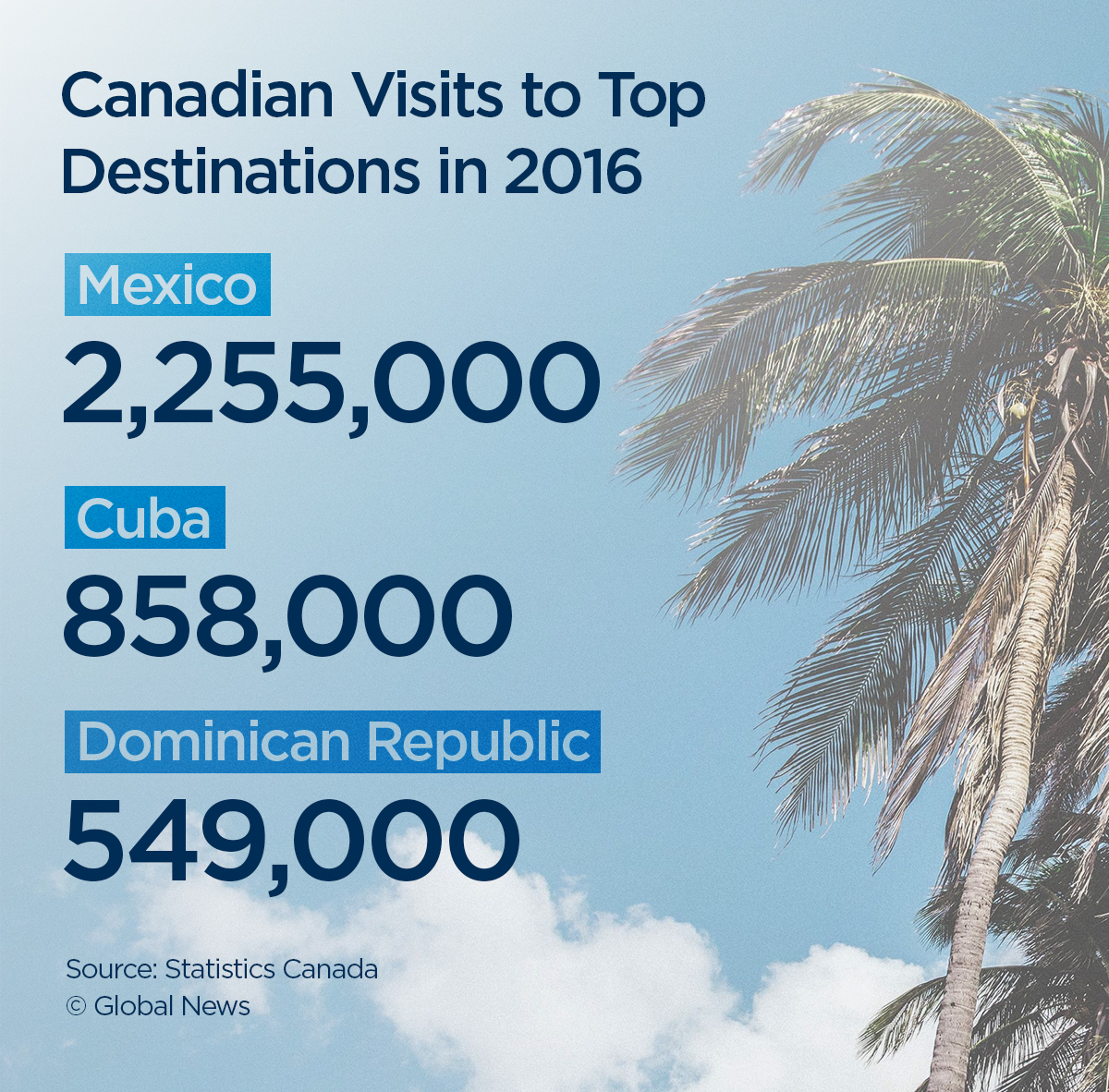 In that top vacation destination, an average of 122 Canadians died annually in the past decade. In Cuba, that number is 52. 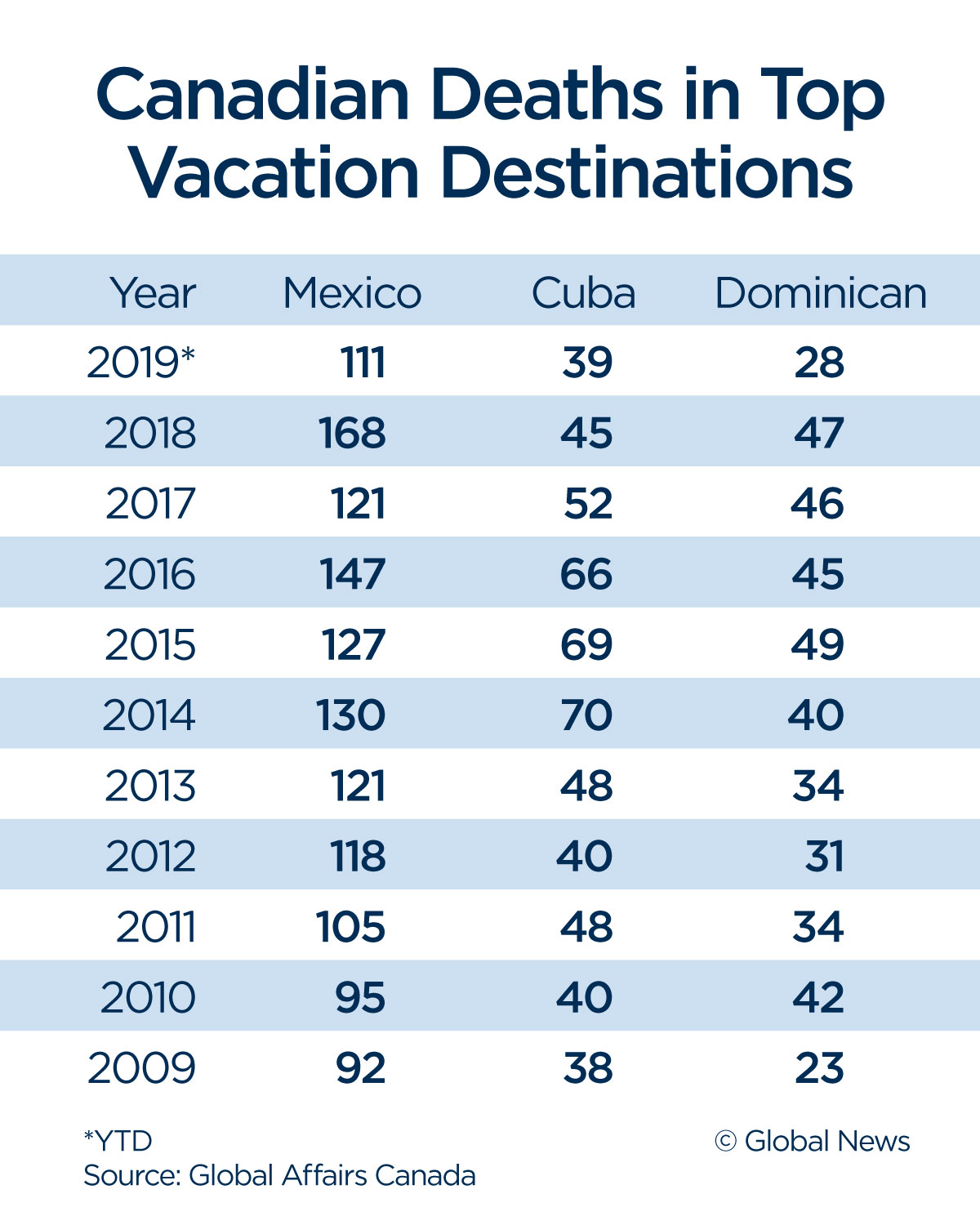 “When you actually look at the number of deaths relating to the number of Canadians travelling, it is a very, very small percentage,” infectious diseases specialist Dr. Isaac Bogoch told Global News.

“It’s clear from this data these are still very safe places for Canadians to travel.”

The Toronto General Hospital doctor says it’s important for people to take precautions while travelling, and, before leaving, see a travel specialist to get advice about medication and vaccination. In general, he says heart attacks are the most common cause of death for travellers, followed by motor vehicle collisions. He says tourists should take extra precautions on roads they’re not familiar with.

As for whether he thinks Canadians could be dying in “mysterious” ways down south, Bogoch says the data for 2019 so far doesn’t support that.

“I think it would be way too premature to make any meaningful conclusions from the numbers of deaths in travellers from any of these locations right now, this early on in the year,” says Bogoch.

“I think to make any meaningful conclusion, we would need to see the full year of data first.”

Canadian tourists getting sick in the Dominican Republic

Along with concern over deaths, more reports are surfacing of American tourists getting ill while on vacation.

For Canadians in the last few years, that number is on the decline. But the numbers provided to Global News by Global Affairs may not capture the full picture: as in with deaths, the numbers are only captured if families reach out for consular services. And, if someone doesn’t see their doctor until they return from vacation, Global Affairs wouldn’t capture any information about what happened to them. 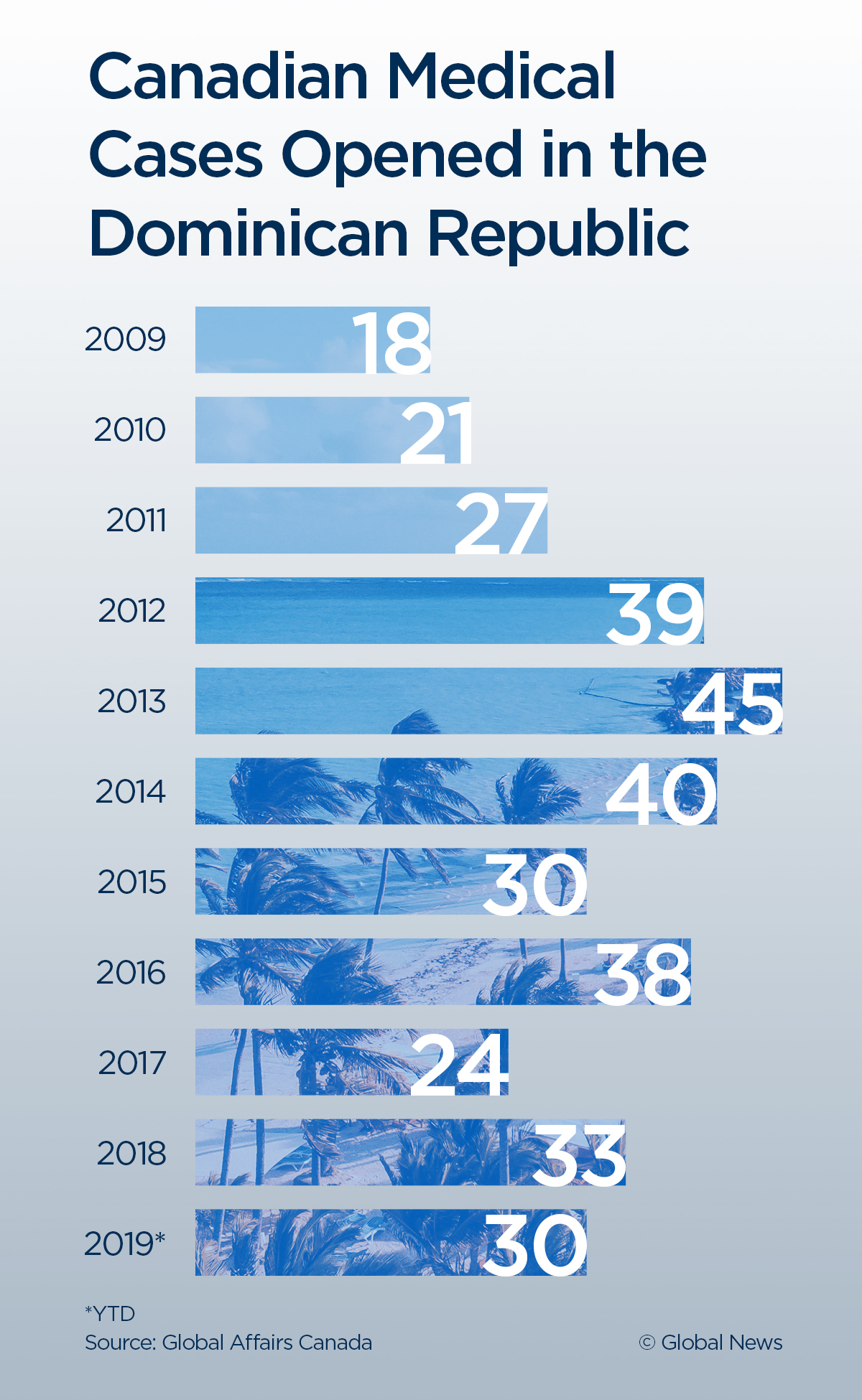 And that’s exactly what happened with Canadian Allan Smith, who spent a week in Punta Cana with his family back in 2012. He started experiencing flu-like symptoms right before he boarded a plane home.

That turned into the longest and worst illness he’s experienced, with symptoms kicking around for six weeks.

“Vomitting and diarrhea at the same time barely being able to walk to the bathroom. My wife basically needing to act as a nurse for the most part,” the now-56-year-old told Global News.

“And I’m not a man-flu kind of person. I usually just take care of myself. I don’t want to really be babied or anything, but I needed help.”

He says doctors determined he had a virus but were never able to figure out exactly what was wrong. Smith describes himself as a researcher and a careful traveller. He had taken Dukoral and said he was very careful about what he ate and drank — no fresh fruit, for example, and no food or water off the resort. Neither his wife nor his two daughters got sick, which left him scratching his head.

READ MORE: Winnipeg woman dies while on vacation in the Caribbean

When reports of death and illnesses hit American media, his wife started thinking about their trip. She became more concerned when she heard of an American couple who died at the same resort they had stayed at years before.

“It made me think maybe the conclusion wasn’t as simple as they thought, but the situations that are happening are definitely concerning,” said Smith.

Smith loved his time in the Dominican and doesn’t want people to be scared of travelling, but he does want more answers — and says Global Affairs should be more forthcoming about what’s going on.

“The Canadian government or somebody is being more opaque than they need to be. I think people need to be transparent. I know people in the Dominican that we met are very invested in making sure Canadians are enjoying their stay. So I would like to get some real answers.”