It’s being dubbed an “emergency room on wheels.”

On Monday, a unique ambulance, that’s set to begin transporting patients in the new year, was unveiled in Edmonton. It will be Canada’s first ambulance that is fully equipped with all the tools needed to save lives in the precious moments after a stroke occurs.

Time is of the essence with stroke treatment. The unique ambulance is equipped with a CT scanner and lab equipment as well as video and audio communication capabilities to allow EMTs on board to share information with doctors and make a diagnosis quickly and while they’re en route to hospital.

READ MORE: Saskatoon woman warning others about uncommon signs of a stroke

The technology will have the greatest impact on stroke patients in rural Alberta and will serve Albertans living within a 250 kilometre-radius of Edmonton.

“Any time anyone is having a stroke, a CT scan has to be done before we can give definitive treatment,” Shuaib said. “In a big city, this can be done within about 20 minutes of arrival, in a small town it could take about two hours.”

The treatment has been around for over 25 years but until now, some northern Alberta patients have had to wait until they arrived in a hospital with a CT scanner to receive a diagnosis. Doctors need to first rule out whether the stroke is caused by a brain hemorrhage before a treatment can be administered.

“Reducing the door-to-treatment time is critical in saving a stroke patient’s life and limiting their disability,” Shuaib said.

Twenty per cent of strokes are caused by brain hemorrhage and 80 per cent by blocked arteries.

“So that’s one in five chances,” Shuaib said.

About 6,500 Albertans suffer a stroke every year. The University of Alberta treats about 2,800 of those patients, 500 of which come from outside the city.

The stroke ambulance will be dispatched from the U of A Hospital, northern Alberta’s centre for stroke care, starting in January.

That means a diagnosis could be made while en route to hospital and treatment could already have started.

Stroke is the fourth-most common cause of death and the leading cause of disability in Canada. Shuaib said the proactive approach to stroke treatment could save thousands of dollars in treatment costs, especially for patients who have suffered a massive stroke.

“If you take 100 patients who have had a stroke, about 15 per cent would die, approximately 28 per cent would make a full recovery and the rest of them {would suffer} a varying degree of disability- about 20 per cent would end up in nursing homes- that’s the one that’s expensive,” Shuaib said. “If everyone got the treatment within the first 90 minutes, then 25 per cent more would end up going home – so a highly significant difference.”

The total cost of the stroke ambulance pilot project is $3.3 million and is funded by the University Hospital Foundation’s Brain Centre Campaign. 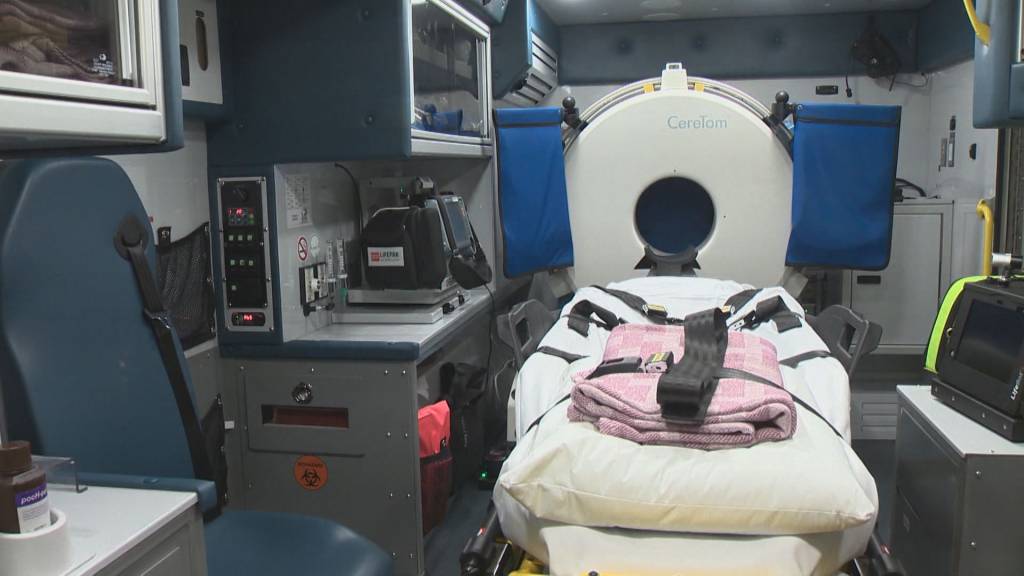 with files from Su-Ling Goh