The past 12 months have been the warmest on record across the globe. And the consequences will not only be felt around the world, but throughout Canada.

Not only have the past 12 months been the warmest, but if you start in a different month, Earth has had a 12-month warming period nine times straight.

The continual warming will have varied effects across Canada: there will be increased floods in some areas, drought in others and we can expect to see insects and animals moving outside of their normal habitat.

Of the past 16 years with the warmest global temperatures, all but one have been in the current century, an alarming trend. 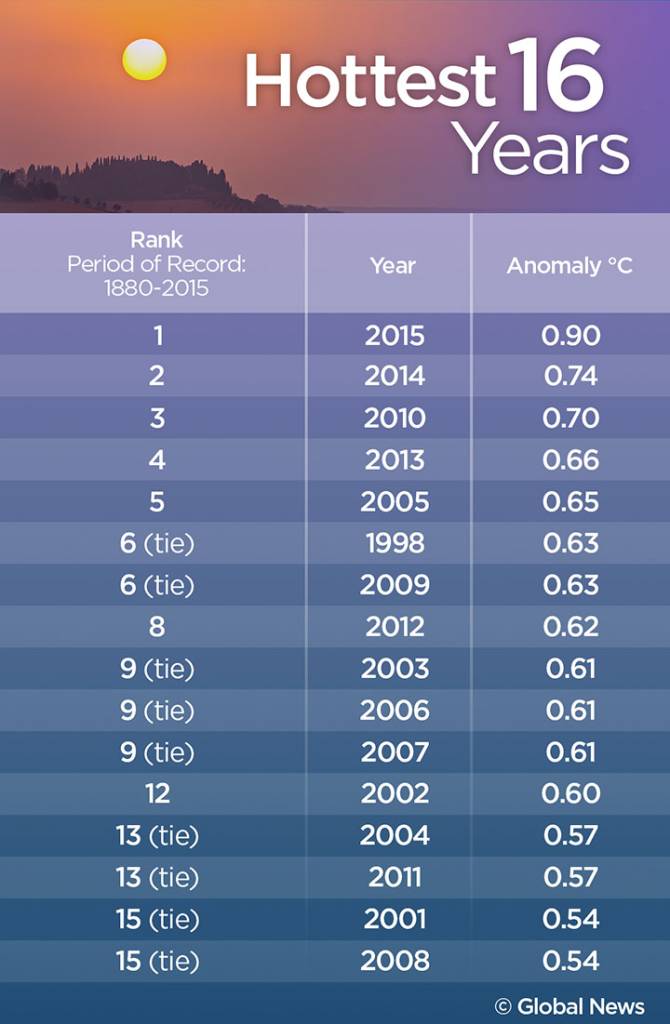 Dana Nuccitelli noted in The Guardian last week that it turns out that no matter where you begin your year, you will always get a 12-month record temperature going back to a period ending in September 2015.

WATCH: A Year in the Life of Earth’s CO2

In 2015, global temperatures broke a record for being the warmest, second only to that set in 2014. And it’s believed that on the course we’re on, 2016 will set yet another.

Of course, the temperatures in 2015 were influenced by a strong El Niño, a warming in the Pacific Ocean that influences the global climate. In Canada, temperatures were above-average in most parts. However, climatologists said the phenomenon was not solely responsible for the record warming.

“Even without El Niño, this would have been the warmest year on record,” said Gavin Schmidt, director of NASA’s Goddard Institute for Space Studies when NASA released their 2015 findings. “And that’s mainly due to the increase in the burning of fossil fuels and the carbon dioxide that goes with it.”

READ MORE: El Nino—What it is and why it matters

The main driver of warming temperatures has been the increasing amounts of carbon dioxide in the atmosphere, largely anthropogenic, or human-caused.

In May 2015, the National Oceanic and Atmospheric Administration (NOAA) released a study that concluded that carbon dioxide levels (CO2) had reached their highest levels since 1958.

As of July 17, the CO2 levels measured at Mauna Loa Observatory in Hawaii by the Scripps Institution of Oceanography were 404.74 parts per million, meaning that for every million molecules of air there are 404 molecules of CO2.

Just last week, a new study published in the journal Geophysical Research Letters found that, between 2011 and 2014, Greenland lost about one trillion tonnes of ice, rising sea levels by 0.75 mm each year. This is twice the average of the past two decades.

While neither NOAA nor NASA has released its global temperature analysis for June yet, NOAA has released its national overview concluding that June 2016 was the hottest June on record across the contiguous U.S. surpassing the previous record set in 1933.

NASA is holding a teleconference on Tuesday to discuss recent climate trends as well as the impacts of the ongoing Arctic sea ice record lows.